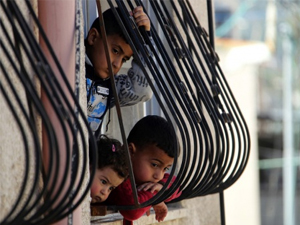 The Chicago Faith Coalition launched the “Israeli Military Detention: No Way to Treat a Child” campaign on October 16, 2014 at Grace Episcopal Church in Oak Park. Gerard Horton of Military Court Watch, an organization that monitors treatment of children in Israeli military detention, described the harsh treatment of Palestinian children detained by Israeli military authorities including middle of the night arrests, long interrogations, and harsh sentences in prisons far from their families. Salwa Duaibis of the Women’s Centre for Legal Aid and Counseling spoke of the negative psychological impact of night raids and detention of children on those arrested and their families. Both indicated that 8,000 Palestinian children have been victims of these policies since 2000.

The two primary goals of this campaign are to end the abusive treatment of Palestinian children living in the West Bank by the Israeli Military and Israeli Military Court system and in the long run to end the Israeli occupation. International civil society has agreed that children aged 12-17 under detention are not to be subjected to any form of abuse. Israel has signed on to a number of international conventions regarding the treatment of children, including the 1989 Convention on the Rights of the Child and the 1984 Convention against Torture. The Israeli military system in the Occupied Territories needs to adhere to the standards of these international conventions in their treatment of children. Child detention is a key strategy of the Israeli Defense Forces to maintain the Israeli occupation. It disrupts family and community life, and deters Palestinian youth from developing the capacity to provide leadership and gain skills for a vibrant Palestinian civil society. Ending the occupation is key to justice and equality for Palestinians as well as a way to end these child detention abuses.

The seeds for this campaign were laid when Brad Parker, International Advocacy Officer for Defense for Children International Palestine led a workshop on the Israeli military detention of Palestinian children at the Chicago Sabeel Conference in September 2013. Actual work on the campaign began in the spring of 2014.  That spring the Chicago Faith Coalition supported Friends of Sabeel North America in its effort to seek signatures to its letter to Pope Francis I which in part asked the Pope “to publicly call upon the government of Israel to end its mistreatment of Palestinian children.”

Many children ages 12-17 in the Occupied Territories live in fear that they will be snatched and detained by Israeli authorities. Multiple human rights organization have documented these child detention practices in detail including UNICEF in its report, “Children in Israeli Military Detention: Observations and Recommendations” March 2013; a report of British lawyers funded by the United Kingdom Foreign & Commonwealth Office from June 2012 on the treatment of Palestinian children under Israeli military law “Children in Military Custody“; a report by Addameer, the Prisoner Support and Human Rights Association, called “Administrative Detention in the Occupied Palestinian Territory : a Legal Analysis Report,” (Third Edition 2013); B’Tselem,The Israeli Information Center for Human Rights in the Occupied Territories, 2011 report “No Minor Matter”; the National Lawyers Guild Delegation report of May 2014 “Prisoners of Injustice”; and ongoing documentation by Defense for Children International Palestine as well as its April 2012 report,“Bound, Blindfolded and Convicted.”

The excellent ABC Australian forty-five minute video, “Stone Cold Justice,” makes it clear that the IDF’s policy of detaining and abusing Palestinian children is a way of breaking the non-violence resistance to the occupation.

In the most updated report on Children in Israeli Military Detention published by UNICEF on February 13, 2015, after reviewing over 400 sworn testimonies UNICEF concluded

It is estimated that since the year 2000, around 8,000 Palestinian children have been detained and prosecuted in the Israeli military court system. This campaign is calling for the Israel Military to stop each stage of its detention of Palestinian children: night arrests, blindfolding and restraining children; separation from parents; physical abuse, verbal threats and isolation and forced confessions. The campaign is also asking the United States Congress to pressure Israel to comply with international conventions and to stop military detention of Palestinian children.

Plans are being made to hold a Congressional briefing in Washington, DC either in late summer or early fall at which time a Palestinian child who had been arrested, detained, and sentenced with his parents and lawyer would testify.  The campaign is working with the US Campaign to End the Israel Occupation and Defense for Children International Palestine.  Supporters of this campaign will be asked to call their representatives to attend this briefing.

Presentations have already been made at the US Campaign to End the Israel Occupation’s annual organizer’s conference in San Diego this past September; the November Sabeel Conference in Madison, Wisconsin; and at a Jewish Voice for Peace sponsored event in Tucson, Arizona.

Two members of the campaign’s committee will be making presentations to several groups in Raleigh and Durham, North Carolina in late February. The website for this campaign nowaytotreatachild.org contains a wealth of information including a description of each step from arrest to release, legal framework, a campaign toolkit, resources, events and advocacy, list of coalition partners, “What you can do” and “Join Us on Facebook.”

Newland Smith is a member of the Chicago Faith Coalition on Middle East Policy and the Episcopal Peace Fellowship’s Palestine Israel Network. He is a retired theological librarian and lives in Evanston, Illinois.