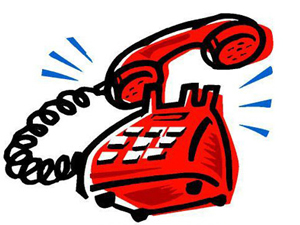 At 3:35pm on a Tuesday as I sat at the reception desk at CAIR-Chicago, I received a phone call. As a communications intern with the Council on American Islamic Relations (CAIR) in Chicago, I do a lot of my work from the reception desk and therefore I get a lot of phone calls. This in itself has been a learning experience: I learned how to get over my fear of talking on the phone, how to transfer calls – I even learned how to transfer calls in Arabic. Sitting at that desk means that I am the first thing people see when they walk in the door or the first voice they hear when I pick up the phone and on Tuesday it meant that I got a call like this:

From a withheld number, a woman spoke loud and clear, her voice old and sharp like a chronic smoker or like she had been screeching at someone for an extended period of time and now her voice was crass and taut. She immediately informed me that she wanted to talk about the “Islamic disconnect” happening at the moment which was a “real problem.”

She went on to inform me of many things: that Islamophobia is not a real issue in America, that in fact it was white-ophobia and Christianophobia and Jew-ophboia that were the only real issues. Really, she said, Islamophobia was all made up by us (and by ‘us’ I assume she meant Muslims). She declared that all we want was sharia law but that America would never be a Muslim nation and then, she so kindly imparted on me, that we could take Hamas and Hezbollah and all of it and throw it in the trash.

Well, thank you for you call today, I replied. I was ready to end this conversation.

Thank you for nothing, you skank, she answered and then hung up.

I should make something clear right now: I’m white. I’m Christian. I’m from Ohio. I wonder how that conversation would have gone had she known that. I have a feeling that she would have interrogated me about my reasons for working at CAIR-Chicago.

At first I found this exchange somewhat ridiculous and incredulous. I haven’t heard the world ‘skank’ since maybe middle school.  I wanted to brush it off. It’s just another wacko, ignorant and vitriolic, and maybe just a little afraid of all these things happening in the world. I saw her as just another old person who couldn’t adapt to and couldn’t accept the growing, expanding world and who would eventually, along with the rest of her generation, pass on leaving behind hopefully a newer, more tolerant generation.

But it was hard to brush this incident off. It was hard to dismiss it as nothing because the incident is clearly not “nothing” for the many Muslims living in America today.

As a white, Christian girl from the Midwest who works at an organization dedicated to fighting bigotry, today was the first time I have ever experience that bigotry first hand.

Something sat in my stomach perhaps similar to shock and confusion, maybe mixed with embarrassment. Maybe even a little shame. I don’t know what I was ashamed of or embarrassed of. I’m not sure why I was shocked. I knew that this discrimination existed in the world, in our country, in my city. But there’s a difference between knowing –even witnessing — discrimination and being a victim of it.

Now on Thursday, two days after the phone call, I find that there have been two questions circling in my head that I can’t seem to answer:

I don’t understand. You don’t even know me.

I guess they’re not actually questions, but in my head the heavily implied questions follow: So why? Do you really care that much?

I don’t understand how people can have so much hate for an entire people that they find it worth their time to call you up and tell you everything that’s wrong with that religion. Because there’s something premeditative about that phone call; the woman would have had to take the time to find the phone number online — I don’t imagine she had the number already saved in her phone. She took steps and time to make that call just to tell me that Islam and Muslims were not welcome in America. I don’t understand how she can care that much about how someone else lives their life. I don’t understand how she can hate so indiscriminately that she would call up any organization associated with the name of Islam, even a faceless individual like me who she could not see and did not know, and give them a piece of her mind.

Isn’t it exhausting to hold up such hate? To care that much about how a billion people on this planet live their lives? Or to be so concerned about the actions and faith of only 1% of the American population? Isn’t that sort of indiscriminate hate exhausting?

Today in Washington, DC, the summit against violent extremism concluded. In the endnote speech, President Obama addressed the need for tolerance for all people, religions, and nationalities and to create dialogue between Muslim youths in the Middle East and North Africa and youths in America. He stressed that it is not enough to simply stop ISIS, but to prevent new fighters from joining. This barrier must be created through an inclusive community that attracts and earns respect from all citizens and does not alienate minorities.

“Young adults are taught to hate,” he said. “It doesn’t come naturally to them. We as adults teach them to hate.”

When we allow cruel messages to exist online, to circulate, and attack; when we allow our news reporters to comment more on the physical being of a person than their actions and policy; when we find the need to use our diversity as insurmountable differences, to label each other in terms of these differences; or when we have become a society in which compromise is intolerable on any level and that only taking a stand even to the extreme is laudable, then we allow hate to permeate and infiltrate our society.

It is hard to argue with hate. It is difficult to fight deliberate ignorance. It is impossible to sincerely talk about discrimination and hate crimes when most Americans cannot relate or truly understand what those words mean.  In the past week, the news channels have talked on and on about whether the murder of the three students at Chapel Hill were motivated by a hate crime. But as a country with a white, Christian majority, in reality few of us actually know what it is like to know that someone hates you just because you are you and are willing to act on that hate.

I know that what I experienced on Tuesday was a very tame — albeit biting — form of discrimination. I have not been denied employment or subjected to abuse or followed by police. But I can say that if that was just the tip of the iceberg, then it makes your courage to wear your faith on your head or in your name or in your actions that much more impressive and admirable. To stand up every day and know that you may face this hate and anger and ignorance but still continue forward is heroic and I’m sorry that it took me so long to understand that.

The Not So Innocent