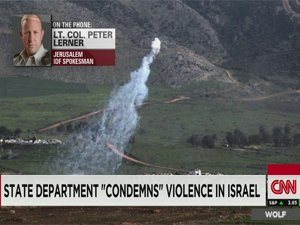 About a week ago two Israeli soldiers were killed and seven wounded by Hezbollah missile attacks near the Lebanese border in what the New York Times called “the most severe eruption of hostilities in the area since the fierce enemies’ devastating month long war in 2006 and threatened to incite a significant escalation.” But what really happened?

In a letter to the Security Council, the Israeli U.N. ambassador, Ron Prosor, said “Israel will not stand by as Hezbollah targets Israelis.” He said any retaliation coming from Israel will be a form of “self-defense”. Prosor ignored mentioning Israel’s targeted air strikes the previous week that initiated the conflict to begin with. Israel invaded Syrian sovereignty, killed six Hezbollah fighters, one of them being the son of a top Hezbollah commander, and assassinated an Iranian Revolutionary Guard general. The area where the attacks on the Israeli soldiers took place is near Shebaa Farms, a disputed area between Lebanon and Syria adjoining the Golan Heights, under Israeli control. It’s common in the U.S. news media not to report initial Israeli government actions that initiate conflict with their neighbors. Anyone who’s familiar with Israeli strategy under these circumstances knows that they rarely aim at low-value targets especially if it means crossing into Syria. Hezbollah has military storehouses and convoys in the Syrian Golan Heights and Israel fears they will use them since they are so close to their border. In 2006 the two went to war with each other and more than 1,000 Lebanese were killed and over a million were displaced. Iran helped supply Hezbollah with the weapons. Ever since then, the relationship between Hezbollah and Israel has been tense and uneasy- a Middle East Cold War – of simmering hostilities that often boil up into attacks on the border.

The men killed were highly important to Hezbollah; so Hezbollah’s retaliation was expected as well as Prosor for Israel and much of the American media to focus on the Hezbollah attack on the Israeli soldiers. The event received little media attention in the U.S. and beyond this burst of stories after the initial incidents; all is quiet on the western front. The treatment of this story reflects a long-standing pattern of media reporting on Israel’s response to an attack from one of their enemies without also reporting the full story of what may have initiated the attacks.

Last summer, the kidnapping of three Israeli teenagers led to an immediate response by Israel. They knew right away the men who killed the boys were Palestinians operating independently, but still said Hamas was behind the attack. That narrative was used as a reason to invade Gaza and kill over two thousand people, 80% of whom were civilians. Stories from international news sources describe the repercussions of the attack that still linger today. But the deteriorating conditions in Gaza as described by the UN in a February 5 update are not reported on the U.S. cable news channels. But Prosor’s latest statement to the U.N. that Israel “will take all necessary measures to defend itself after the exchange of fire” is reported in detail. In these cases, the full context is not included and Israeli attacks are described as a means of “defending themselves” against Arab terrorists. If they do mention Israeli involvement in initiating a conflict, it is at the end of the broadcast or article and quickly stated without elaboration.

An analysis of the CNN report on the Hezbollah and Israeli army attacks is instructive.

Fighting between Israel and the Lebanese militant group Hezbollah has left two Israeli soldiers and a Spanish peacekeeper dead, officials said Wednesday. Separately, in Gaza, the United Nations said it was “outraged” when Palestinian protesters climbed the perimeter of a U.N. compound and damaged it. U.N. officials took Hamas to task for not preventing the incident.

The first thing covered is killing of two Israeli soldiers and the Spanish peacekeeper by Hezbollah. This story is linked for no apparent reason to the U.N. compound in Gaza being damaged by Palestinian protesters. In both stories, the Arabs – in this case the Lebanese Hezbollah and the Palestinians in Gaza are the aggressors – while the Israeli army and the UN are the recipients of the violence. There is no discussion until late in the article about why Hezbollah attacked the Israeli soldiers or what the Palestinians were protesting about. This presentation of the story suggests that Arabs are violent without cause and the Israelis and the UN have no part in contributing to the violence.

To discover the context of these stories, you need to search further down in the article. Why did Hezbollah attack the Israeli soldiers? As stated at the beginning, it was retaliation for an Israeli attack on high-profile Hezbollah and Iranian fighters. This is how it is explained in the CNN article

More than a week ago, Iranian semiofficial media reported that an Israeli airstrike killed six Hezbollah members and a senior Iranian commander around Quneitra. The Israeli military refused to comment about the January 18 strike.

Although both the New York Times and Al-Jezeera reported on this Israeli attack without equivocation, the CNN report suggest the source is questionable – it’s from “Iranian semiofficial media” – and is satisfied that the Israeli military refuses to comment.

Why was the “Spanish peacekeeper” killed by Hezbollah at the same time as the opening of the article suggests? Later on, CNN reports

It was unknown whether the peacekeeper, 36, was killed by Israeli or Hezbollah fire. The IDF told CNN it is investigating.

So the Spanish peacekeeper may actually have been killed by Israeli fire to the extent that the IDF (Israeli Defense Forces) is conducting an investigation.

And why did protestors in Gaza damage the UN compound? “This serious incident took place in the context of increasing incitement against the United Nations in Gaza.” Why was there “incitement” against the UN is Gaza? Could it be because of the emergency situation of lack of promised funding, housing, food, and jobs described by the recent UN report? The CNN reader will never know.

In attempting to get the complete context from any story within the Middle East in the U.S. media, especially involving Israel, Lebanon, Syria, and Palestine, the reader has to work over-time to do her own research to discover what’s really behind these attacks by “Arab terrorists.”

Did We Learn Anything From the Chapel Hill Shootings?