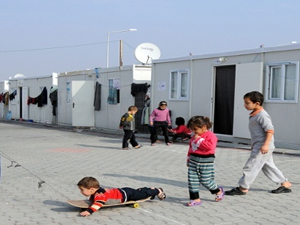 The Middle East is facing turbulent times. The rise of the Iraq and Syria based militant group, ISIS, has demanded the attention of many in the world. Whether it be from ISIS, other militants, or even Assad’s Syrian Army, the people of Syria are those who have suffered the most. Alleviating the suffering of the Syrian people should be the main concern of the world powers. Yet some do not see it this way and use this civil war to advance their political gains. Turkey is in the middle.

Turkey has been an important player in the Middle East for a very long time. Since the Justice and Development party’s rise to power in 2003, the country rose out of its poverty and gained international recognition.  Much can be said about Turkey’s role in the Arab Spring, and more specifically its role in the Syrian protests, which evolved into a civil war. At the time Prime Minister Erdogan supported the protests. In the case of Tunisia, the protesters were actually able to oust the president and establish the democracy they sought. In Syria, that did not happen and a long and violent civil war started. Did the Turkish government make miscalculations about Syria? There are valid arguments that would support both answers to this question.  However that issue is not as important as knowing what Turkey is doing currently to solve this crisis. In addition, dispelling the false accusations about the Turkish government supporting ISIS is needed.

First and foremost, we must get our numbers right. According to the Syrian Observatory for Human Rights, more than 200,000 people were killed since the start of the war in 2011. Civilians make up 60,000 of those killed. The number keeps climbing every day. According to the UN Refugee Welfare Agency (UNRWA), there are 3.8 million Syrian refugees that have taken asylum in neighboring countries and 1.6 million of those refugees reside in Turkey.

The Turkish government has taken huge steps to aid the refugees including building schools, places of worship, and providing aid and shelter. Up to this date, 22 refugee camps have been built hosting about 217,000 people. Two additional camps are set to open as the Disaster and Emergency Management Authority (AFAD) plans to increase its camps to 300,000 people capacity. In total, Turkey has spent 4.5 billion dollars on refugees from Syria.

There have been various allegations that Turkey is helping ISIS. Various independent news sources have blamed Turkey for directly supporting ISIS.  In October of 2014, Vice-President Joe Biden implied that Turkey, the UAE, and Saudi Arabia supported ISIS by supplying them with weapons. He later retracted his statement and apologized. But the belief still persists for many that arms are being intentionally provided across the border into Syria.  The Turkish border with Syria is very long – approximately 511 miles. While the Turkish army has placed defenses at various spots along the border, controlling every location has proved difficult. Turkey has rejected closing the border completely as it would deprive many displaced Syrians of healthcare, food, and shelter.

The Kobani incident is also an important turning point in the history of the current battle against ISIS.  Kobani, also known as Ayn-Al Arab, is a Kurdish city on the border between Turkey and Syria. Again, there have been complaints that Turkey refused to help Kobani, or it obstructed the Kurdish fighter’s flow of materials. Certain major news outlets defined Turkey as a reluctant partner in this issue. The Huffington Post recently stated that Turkey is working against US interests as it is “being deliberately unhelpful because of its own interests.”. Like the Huffington Post other articles spread the misconception that Turkey doesn’t care while the Kurdish groups, the Democratic Kurdistan Workers’ Party (Partiya Karkerên Kurdistani, PKK) and Democratic Workers’ Party (Partiya Yekîtiya Demokrat, PYD) are fighting against ISIS. Turkey’s involvement in supporting the Kurdish groups are complicated by the fact that both the PKK and PYD are classified as terrorist organizations by the Turkish state. After 40 years of a PKK insurgency against the Turkish state, the Turkish government has started peace talks with the PKK a year ago and is working on disarming the group. Rearming the PKK to fight ISIS, while a fragile peace process is underway would be counter-productive. But what about Kobani’s citizens? The 300,000 citizens of the city are currently refugees in Turkey. Despite Turkey’s stance on the PKK, it allowed the passage of Iraqi Kurdish Peshmerga fighters into Kobani to aide the defenders of the city. Is Turkey helping Kobani? So far it seems to be doing more than many other nations in the area.

Turkey’s role in the Syrian crisis has been mainly a humanitarian one which would likely be undermined by being actively involved in the military alliance to defeat ISIS.  Ironically, in the early years of the war in Syria, Turkey actively advocated for military intervention to remove Assad. Whether one agrees with that approach or not, it’s become convenient for some of their Western allies to criticize Turkey’s lack of military involvement now.