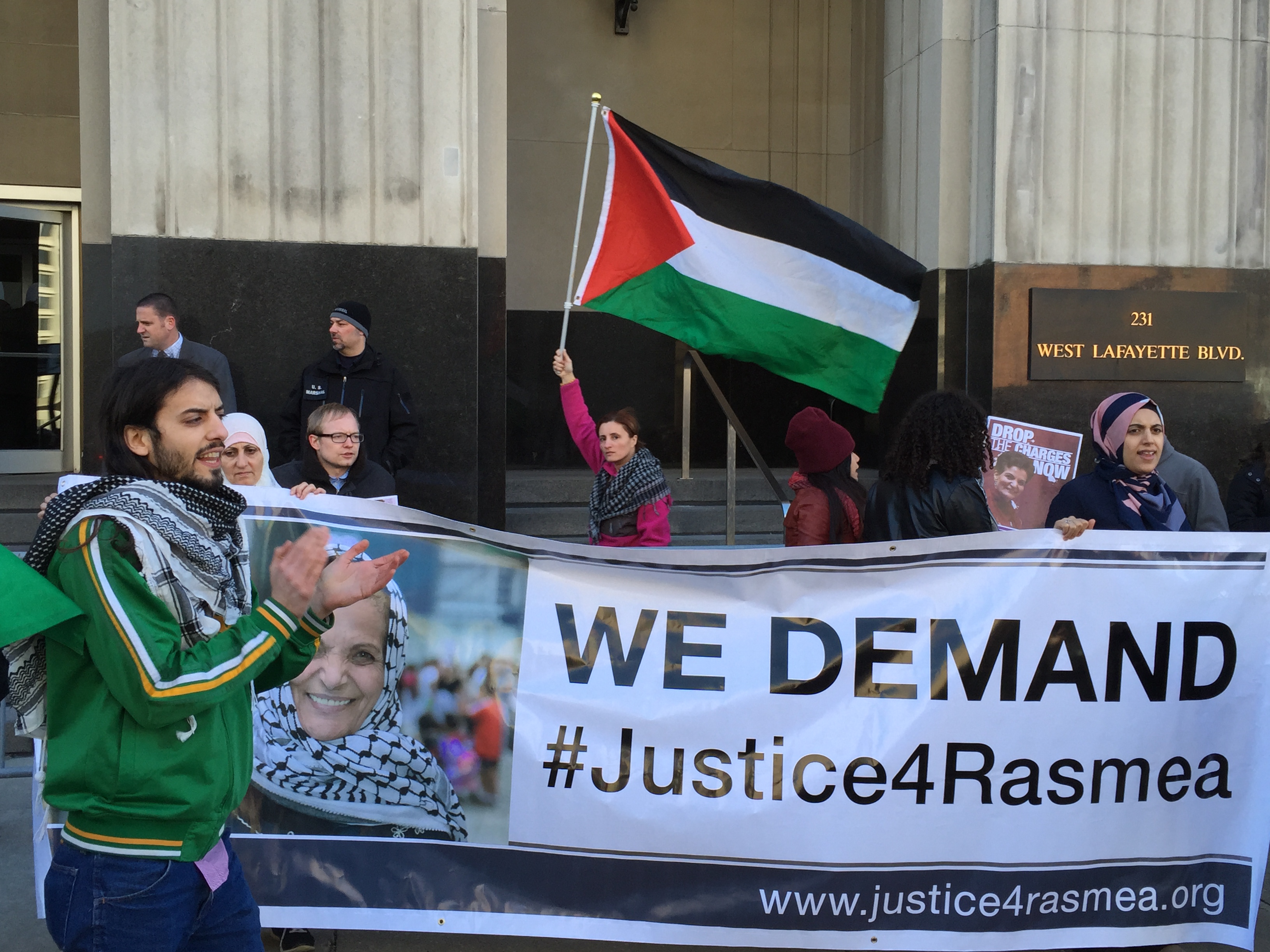 In a trial that Judge Drain declared was “not political,” Rasmea Odeh was sentenced yesterday to 18 months in prison, a $1,000 fine, immediate revocation of her citizenship, and deportation to Jordan after serving jail time. Odeh was released on bond pending appeal. As Odeh said in her statement at the hearing, “every time I try to build my life up, something comes along that puts me back to zero.”

The hearing’s beginning did not bode well for Odeh’s case as Judge Drain approved two motions by the prosecution for “obstruction of justice” that added time to the sentencing guidelines. This involved Odeh ignoring the Judge’s instructions to not bring up her experiences in Israel including her military trial and torture which he had ruled inadmissible. Odeh would later say in her statement that she respected the court, but also felt compelled to tell her full story of what had happened to her. But even after this inauspicious start, Judge Drain made a point of saying he had read most of the seventy-two letters for leniency attached to the defense pleading and had gotten in addition a “ton of letters from people of all walks of life from all over the country” testifying to Odeh’s character. This would be the first sign that the over 200 supporters filling the courtroom and the overflow room at the hearing and the outpouring of support expressed in well over 70 letters would have a major impact on how Judge Drain would rule. It would also clearly undermine the constant prosecution contention that Odeh was a lying terrorist who flouted the justice of the court and continued to “pal around with terrorists.”

The core argument of Odeh’s defense team was expressed by Attorney Michael Deutsche:

She has suffered in her life and will now lose the life she has built in this country. Hers is a unique case and a unique defendant. I urge you not to give her any incarceration and let her serve her community while she is still here.

Deutsche painted a picture of a woman who had taken a lot from this country, but given a lot to her community. The letters sent on her behalf were not form letters but from Arab immigrant women, human rights lawyers, people who work with domestic abuse – all people who knew her and had worked with her personally. After listing her contributions to society during her 20 years in the U.S., Deutsche described her continuing her community work while she was “suffering quietly from symptoms of PTSD” diagnosed by the expert witness and her own physician. In addition, he emphasized her age of 67 and how her time in county jail aggravated her high blood pressure and anxiety attacks.

Deutche then focused on “the nub of this case” and the overreach of the prosecution.

“This is a victimless crime. Because she was convicted in a military court 45 years ago, they [the prosecution] want to parade her as a terrorist through the court. All through history you had people resisting oppression. The French resisting German occupation, our own people resisting the British, people in South Africa and Angola, Nat Turner resisting slavery…She is not being charged for terrorism…It would be unfair and unjust to sentence her to prison for a conviction 45 years ago. It is punishment enough for her to lose her citizenship and leave her community. It’s only punishment upon punishment….I ask with all my heart and the heart of all the letter writers and activists, don’t allow this terrorist pandering. She needs justice at this point.”

As Judge Drain’s final sentencing will show, he did reject the “terrorist pandering” of the prosecution. But the statement of Assistant U.S. Attorney Jonathan Tukel demonstrated, there was a lot more focus on “Odeh the terrorist” to come. He led with “her continued association with people with a terrorist background” and went on to show videos of Odeh (that had been ruled inadmissible in court) of a Palestinian woman claiming Odeh had been involved in the Jerusalem bombings in 1969 and portions of the 2004 film “Women in Struggle” that included four female Palestinian ex-prisoners, including Odeh, discussing their arrest and imprisonment in Israeli jails. Tukel contended these videos demonstrated that “she can only be described as an icon in the terrorist community.” His core argument was that the nature of the crime being concealed affects the seriousness of the immigration crime; deportation is not punishment enough; and that jail time serves as a deterrent to people thinking that they can lie and obtain citizenship.

Rasmea Odeh gave the final statement before the sentencing by the Judge. She emphasized her respect for the judge and the court and it was here where she expected to find justice.

“I rejected the deal they gave me [plea bargain to be voluntarily deported without a trial] because I felt if I agreed I could not tell my story. I really wanted a jury to see the picture from my side and the other side.”

Odeh described her life history in detail as she would live her life and “something would happen to me from the outside and destroy my life…I would have to start again from zero.” This included her family being driven from their home in 1947 during the founding of the state of Israel; living in refugee camp tents for 10 years while her father left to America to find work; in 1967 she was uprooted again by Israel’s occupation of the West Bank and East Jerusalem; leaving to study in Beirut but not allowed to continue her education when she returned; her house was destroyed, she was arrested, tortured, and imprisoned for 10 years. She came to the U.S. in 1983 to be with her father who was diagnosed with cancer. Being here was the first time she “felt I could help my community and for twenty years build my life with my community and with people I love and they love me.”

As far as the videos, she stated that “at that time everyone struggled against the occupation and I was not responsible for what that woman said.” She finished by saying “I’ve never been a high profile person. The big issue is helping my community…I hope to find justice with you.”

Judge Drain, in giving his opinion on the case and handing down sentencing, focused on the specific charge – “the offense is serious but not extremely serious.” He believed that she did lie to immigration and lied under oath in saying no to the questions of ever being arrested or detained, charged with a crime or offense, and convicted of a crime or offense. He believed “her history does include some terrorist activities…and her recent history she has been involved in doing a lot of good work with Arab immigrant women in the last 15-20 years. All the letters talked about what an outstanding person she is.”

But Judge Drain continued by stating would guide his sentencing. Regardless of all of this good work, he determined she did lie to obtain citizenship. Referring both to the prosecution and the defense:

Every step of this case has been politicized. It is not a political case. It’s about coming into the country illegally.

The Judge would reject the “politics” of the prosecution’s  claim that Odeh was still a terrorist and a threat to the country, while also rejecting the “politics” of the defense’s claim that Odeh had been initially targeted for prosecution for her Palestine activism and her answers on the immigration forms were affected by her experience of an unjust conviction and torture by the Israeli prison authorities.

The Judge would acknowledge that Odeh “was not a danger to anyone or anything and has spent a life of serving others,” but determined he could not treat Odeh differently than others with this same offense. His sentence of 18 months in jail was in the middle of the 15-21 months guidelines for this offense with credit for time in custody; special assessment of $100; $1,000 fine; continue on her current bond pending appeal; revocation of her citizenship effective today; and an order of removal to Jordan [effective after jail time].

Odeh joined her attorneys and her over 200 supporters in the street in front of the courthouse relieved tha she would be free to continue her work in the community. Michael Deutsch indicated the case would be appealed mainly on the grounds that important evidence had been excluded from the trial including information about her arrest, military trial, and torture in Israel as well as the expert testimony of her suffering from PTSD. He was surprised that the prosecution had agreed even before the sentencing that Odeh would be allowed out on bond pending appeal. He indicated that it may have been due to the realization there were valid grounds for appeal.

On this point, it was very clear that Judge Drain had been genuinely impacted by the effective organizing of the Rasmea National Defense Committee. Having so many leniency letters sent to the Judge as well as seeing the Arab women from Odeh’s Women’s Committee in the courtroom for every hearing also impacted his decision. But it is also likely that Judge Drain was  bolstering his argument that this had been a fair trial by bringing the sentencing back only to the question of whether Odeh had told the truth on the immigration forms. Given the ongoing exclusion of evidence supporting Odeh and the continual portrayal of Odeh by the prosecution as a dangerous person, the sentencing hearing seemed like the only time when the Judge and the conducting of the trial was not “political.”

Odeh’s appeal is expected to last several months. If Odeh loses the appeal, she will serve the full sentence and afterwards be immediately deported to Jordan. During this time, the Rasmea Defense Committee has said they will continue to hold fundraisers and organize around Odeh’s case as an example of the ongoing persecution of Palestine activists by the Justice Department.  Rasmea Odeh’s last words to her supporters were:

I am positive we will win the appeal with all of you beside me.