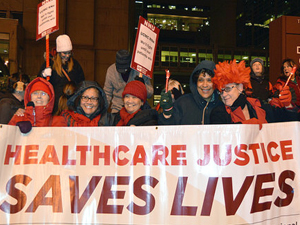 There is no doubt about the fact that the state of Illinois is in a dire financial situation. We need to recognize that we must critically look at our spending habits and and see what we can do to rectify the situation. But in our efforts to balance the budget, we don’t need to discount the human costs that will result. Rather, we need to remember the human element that is a part of this process. For better or for worse, government plays an integral part of our lives. Government must serve the poor, the working class, the middle class, and the upper class. It has a greater affect on some than on others. When government services are cut, there is no doubt that some people will be hurt and we should take that into account. We need to deeply contemplate what it means to have the most moral and just way to balance the budget. Does the budget proposed by the new Illinois Governor Bruce Rauner meet those criteria?

At an Illinois Senate hearing in Chicago yesterday, nearly a dozen social services organizations answered a resounding “No”  to Governor Bruce Rauner’s $6 billion in budget cuts for 2016.

How do we balance the the budget in a moral and just way that recognizes the human element? That is the million dollar question. I don’t have specific proposals, but rather some guiding principles. Sacrifice must be made, but it must be made across all of society, depending on each individual’s ability to bear that sacrifice.

A state’s budget should be compassionate to its citizens. State government has a responsibility to take care of all its citizens. The government serves the people and has an obligation to do all that it can to uphold that responsibility. When it comes to the poor or the working class, the state should make sure that they are taken care of. I’m not saying the state should do everything. However, when those people are going through particularly hard times, the state should be there to act as a safety net. In addition, a state should empower people through education and job training programs. A just government helps people when they are down and works to move people forward. When it comes to balancing the budget, we should see to it that we are not forgetting about being just as well as compassionate toward people. If a spending cut will dramatically alter the lives of people for the negative, it should be reconsidered. Some other alternative should be found rather than breaking these principles of justice and compassion.

A state’s budget should be just and fair to its citizens. If cuts are to be made, or if revenues need to be raised, they should be spread out in a way so that it does not entirely fall upon one socioeconomic class or any one particular group. When balancing the budget and making spending cuts, all citizens should be sacrificing rather than just one group. Why? We know our state’s financial situation is dire and that there needs to be balance. That balance should not come at the expense of one group, especially those who are weakest. The most effective way and caring way is to balance sacrifice across every citizen of Illinois. The sacrifice should also take into account one’s socioeconomic situation. Less should be asked of those on a lower economic strata and more of those who can afford it. A just and balanced state budget is not fiscal rocket science.

If we examine the most current statistics on the State of Illinois finances, we can quickly see why Illinois has the lowest credit rating and worst-funded pension system among the 50 states.

The State of Illinois unfunded pension liabilities are more than 160% of the total revenue.

A state’s budget should be fiscally responsible. When it comes to making payment or paying bills, the state should be timely. Every single one of those payments should be made before they are due. Illinois has long been irresponsible when it comes to pension payments given its history of redirecting pension money to other uses. Every state administration for the last 20 years has mismanaged pension funds and those expecting the pensions promised should not have to bear the burden of fixing this problem. It’s clear from Illinois financial status that the current rate of revenue will never resolve the unfunded pensions. A thorough evaluation always needs to be made of our spending habits and we should take action against wasteful spending. But there also is not enough potential “waste” that could be found to resolve Illinois financial difficulties.

Governor Bruce Rauner released his budget proposal last month. Its main point is to balance the budget solely on cuts without increasing revenue. In fact, he wants to continue to support the recent
drop in income tax rates for individuals and corporations that took place on January 1st of this year. So along with significant cuts, he supports continuing to cut taxes. Once again, we should realize what is the human element in these costs. Governor Rauner’s $34.5 billion budget included $6 billion in cuts in state spending on universities, health care, local governments as well as sharply reducing pension benefits for state workers. Some of the significant details included: 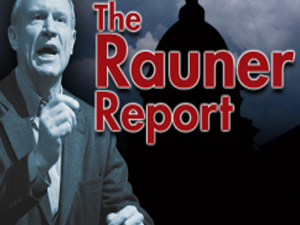 Governor Rauner is cutting the higher education budget by a whopping 31%. This funding drawback would require significant funding changes at the university level in order to make up the difference. This would entail higher tuition rates, and fees, all costs that will be passed on to students. This funding cut only increases the burden on students who are already encumbered with large amounts of student loan debt. This is neither compassionate, nor just, nor responsible. Students in higher education are vulnerable because their full-time job is to be a student and many do not make a consistent income or any income at all. Many also come from lower-income families dependent on state funding. If funding is cut, and universities raise tuition rates to cover the difference, this also hurts students who will be going, or want to go get a higher education degree. We are in a society where a higher education is becoming more and more necessary. These cuts are clearly irresponsible in that they would make getting a degree harder and much more costly. It might even push some to even forgo a higher education degree, and that will be simply detrimental to the individual, as well as the state of Illinois.

Another set of controversial cuts is in Medicaid spending. Rauner’s budget would cut services for renal dialysis, adult dental, and podiatry services. It would end Medicaid’s eligibility for the Illinois Breast and Cervical Cancer program. With cuts in services and programs, the sick would have no choice but to go to the emergency room, which only adds more costs. Medicaid also creates jobs and drives economic activity in the state. The Illinois Hospital Association said that cuts will result in the loss of 12,000 jobs and $1.75 billion in lost economic activity. According to them, 40% of Illinois hospitals are already operating in the red, and that will only worsen as state funding dries up if this budget is passed. Like the Illinois Senate hearing in Chicago yesterday with social services organizations, there have been other gatherings of groups preparing to fight the Medicare cuts. Earlier this month, there was a summit meeting held to organize against the proposed Medicare cuts by the SEIU Healthcare Illinois Indiana union and multiple other groups including the AIDS Foundation Chicago, Campaign for Better Healthcare, Chicago Coalition for the Homeless, Citizen Action Illinois, Heartland Alliance, Illinois Coalition for Immigrant and Refugee Rights and the Sargent Shriver National Center on Poverty Law.

With the cuts in higher education, state worker pension benefits, and Medicare, there is no doubt that Governor Bruce Rauner’s budget is neither compassionate, nor just, nor responsible.