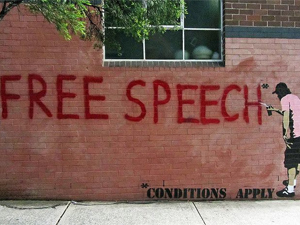 Many Americans will be surprised to learn the First Amendment of the United States Constitution protects freedom of speech—though not entirely. There exists in American jurisprudence a tradition of interpretation known as “balancing theory” wherein the rights enumerated in the first amendment are weighed against the interests of the state. Should a court decide the government’s interests are vulnerable, first amendment liberties may be rescinded. How would these issues be handled if an attack like that on Charlie Hebdo occurred in the U.S.?

The justifying “interests” of the state are varied, but presently, in the wake of the detestable attack on the satirical magazine Charlie Hebdo, one considers the state’s interest in preserving public order. In America, would the state be justified in censoring something like the Charlie Hebdo cover in anticipation of violent retaliation? In such cases, how should the first amendment be interpreted? Should Americans embrace balancing theory with its sensible, compromising means of promoting free speech while maintaining civil order? Or, contrarily, should Americans identify with the “absolutist” view of Justice Hugo Black who, in his biting Konigsberg dissent, emphasized the first amendment’s “unequivocal command that there shall be no abridgment of the rights of free speech and assembly” (Konigsberg v. California State Bar 1961)?

When discussing balancing theory, Justice Oliver Wendell Holmes, Jr. is inevitably referenced. His opinion in Schenck v. United States (1919) poses a convincing hypothetical in support of the balancing framework. Should it be legal to shout “Fire!” in a crowded theater? Shouldn’t the perpetrator be held responsible for the inevitable panic? Holmes explains,

The question in every case is whether the words used are used in such circumstances and are of such a nature as to create a clear and present danger that they will bring about the substantive evils that Congress has a right to prevent. It is a question of proximity and degree.

Not surprisingly, what constitutes “proximity and degree” has been widely construed in American courts, with, it seems, troubling implications for the civil liberties of Muslim Americans. Minority groups are a prime target for balancing theorists.

The present cultural hysteria shrouding Islam parallels our fervor during the Red Scare. Communism, too, was reviled as an imminent threat to American security, forces were mobilized all over the globe to protect America—even the world—from radical leftists. Politicians made gains propagating the rhetoric of a perceived Communist invasion.  Media coverage was predominantly skewed in favor of a flawed conception of Communist ideology. Perhaps Floridian pastors were burning Marxist literature instead of the Quran. But it wasn’t just ordinary American citizens, state and federal judges were convinced of this “imminent threat” to American society. Courts invalidated the rights of citizens by balancing first amendment liberties against the rather distorted urgency of state interests. In Dennis v. United States (1951), the  Supreme  Court  upheld  the  convictions  of  several American Communist party leaders, drawing a peculiar distinction “between the mere teaching of communist philosophies and active advocacy of those ideas.” “Active advocacy”, in this case, was the distribution of literature and leaflets. The court held the party leaders were conspiring to overthrow the government. A flimsy presumption considering, as Christopher Hitchens wrote in defense of absolutism, “there is no known way of gauging the influence of rhetoric on action.” More troubling, in scenarios such as Dennis, what exactly can be equated with the “crowded theater”? The classroom? The sidewalk? A living room? Even today there is little certainty.

A recent Washington Post opinion piece by Andrés Martinez paraphrased timely questions posed by Supreme Court Justice Stephen Breyer: “What does that proverbial theater look like in our hyperlinked world? …what is our era’s equivalent of being trampled to death in that theater?” and finally, “Should the expanding boundaries of our so-called theater… make us rethink what’s acceptable speech…?” Can something so massive as the internet be construed as a theater in the Holmes analogy?

It’s important for Muslim Americans to bear in mind; the “scales” of balancing interpretation are so easily tipped. However ridiculous, many Americans already associate Islam with a dangerous brand of “active advocacy”—with a conspiracy to upend the present power structure—and as the Communist scare shows us, such fears need only be imagined, not real, to warrant the erosion of civil liberties in America (see: Frohwerk v. United States 1919, Debs v. United States 1919, Barenblatt v. United States 1959).

Consider the opinion of Bryan Fischer, long­time spokesman for the American Family Association (he was fired only weeks ago). In 2011 he said, “From a constitutional point of view, Muslims have no First Amendment right to build mosques in America. They have that privilege at the moment, but it is a privilege that can be revoked if, as is in fact the case, Islam is a totalitarian ideology dedicated to the destruction of the United States.” Last June, the now newly elected Georgia congressman Jody Hice said Islamic ideology “does not deserve first amendment protection.” During this year’s Texas Muslim Capitol Day, a Muslim lobbying effort, state representative Molly White would not meet with Muslims unless they “publicly announced allegiance to America and [its] laws.” Bizarre as it may seem, a similar anti-communist oath was once upheld by the Supreme Court (ACA v. Douds 1950).

I agree with Dawud Walid, executive director of the Michigan chapter of the Council on American­Islamic Relations, when he says the Charlie Hebdo cover was perceived as “deliberately provocative.” Admittedly, as a nonbeliever, I can never truly appreciate the emotional response evoked by depictions of the Prophet Mohammed. But I propound the absolutist stance not because it is pristine or inerrant. I embrace absolutism as a lesser of necessary evils, as a means to safeguard the rights of all, not just the many. It can also serve as a thorough check on paternalistic court restrictions that decide what free speech to allow and which to restrict as the courts did during the Red Scare. If we encourage frank, unabated discussion—legitimately borderless communication—truth will be better for it, and I assert the relentless and unfettered pursuit of truth “outweighs” the fear and uncertainty brought on by the wholly unencumbered freedoms outlined in the first amendment to our Constitution. As John Stuart Mill so profoundly explained in On Liberty, all those years ago,

The peculiar evil of silencing the expression of an opinion is, that it is robbing the human race; posterity as well as the existing generation; those who dissent from the opinion, still more than those who hold it. If the opinion is right, they are deprived of the opportunity of exchanging error for truth: if wrong, they lose, what is almost as great a benefit, the clearer perception and livelier impression of truth, produced by its collision with error.

Regardless of any backlash brought on by spectacles such as the Charlie Hebdo cover—even the violent, cowardly atrocities perpetrated last January in Paris—more is at stake if we hold such publications as operating outside the bounds of our first amendment protections, and it must be understood that any exception to the airtight absolutist interpretation leaves Muslim Americans particularly vulnerable, especially at this historical juncture.

Last summer, an Arab American Institute poll found fifty-seven percent of Republicans, when asked the question “If an American Muslim were to attain an important position of influence in the government, would you feel confident that person would be able to do the job, or would you feel that their religion would influence their decision-making?”, responded negatively. Forty-two percent of all Americans “support the use of profiling by law enforcement against Arab Americans and American Muslims,” while favorable attitudes toward Muslims have continually declined to a measly twenty-seven percent. In the same poll, fifty-two percent of participants felt they were not knowledgeable about the faith or its believers. Regarding Islam, Americans are genuinely ignorant and fearful, and without absolutism—if the historic relation between balancing interpretation and public hysteria is any indicator—the first amendment rights of Muslim Americans will continue to be restricted in a number of ways.