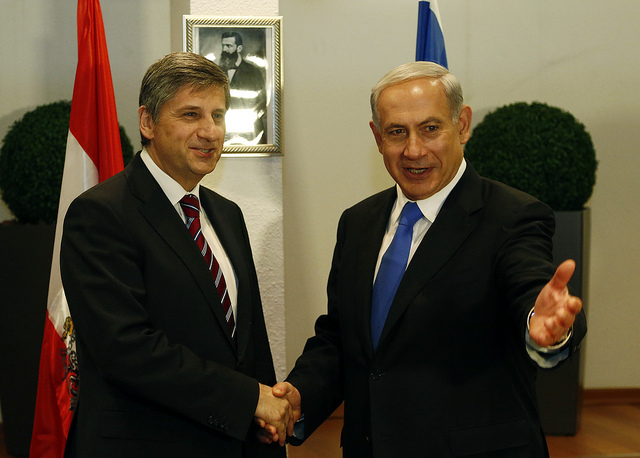 “He mortgaged the future in order to win an election,” David Axelrod said yesterday afternoon on MSNBC.

Benjamin Netanyahu’s Likud Party’s reelection last night in Israel has been entitled as a “Big Victory” by every major news station and news source yesterday. “Big Victory,” “Big Night,” “Big Election.” I think I would describe the election as anything but big. By the end of the night, the election and Likud’s victory felt hollow. Netanyahu’s campaign over the past three weeks descended into partisan, extremist, vitriolic politics that have isolated Israel and made the U.S. weary of an ally it once held close.

Netanyahu’s address to Congress on March 3 aggravated already tense relations between the Prime Minister and President Obama as well as a number of key Democrats in the Senate and House. More than those political figures, more Americans now are skeptical of Israel’s presence in American politics and are tiring of blindly supporting a country and leader whose actions toward the Palestinians are often morally questionable.

Netanyahu’s tactics in the 11th hour of his campaign stunned the world when he first announced that under his leadership a Palestinian state would never exist. Later, when Arab Israeli voters exercised their democratic right to vote in unprecedented numbers, he implored his party’s supporters to go and vote because the Arabs were coming in droves and might ruin the election. Many commentators felt that this stepped close to the line of racism. The Prime Minister of Israel suggested that he resented the rights of some Israeli citizens based on their ethnic origins and that, if he should lose the election, it would be the fault of Arabs exercising their right to vote and not, per se, the Jewish Israelis who wanted him out of office. Shelley Yacimovich, a senior member of Zionist Union which was the main opponent of the Likud Party, responded to Netanyahu’s remarks by putting his words in the context of American politics: “Imagine a warning that starts, ‘Our rule is in danger, black voters are streaming in quantity to the polling stations.’ ”

Netanyahu later posted on Facebook in Hebrew that “there is nothing wrong with citizens voting, Jewish or Arab, as they wish.” But what about the Jewish Arabs? Where do they fall? Or must they pick a side between their religion and their ethnic origins? Netanyahu seems to forget that a great number of Jewish Israelis today immigrated to Israel from other Arab countries or that a number of Jews already lived in Palestine prior to Israel’s statehood. Furthermore Netanyahu’s statement implies a lack of unity across all legal Israeli citizens, that there is a tiered class system that nobody ever wants to mention.

But that distinction was pushed aside when Netanyahu’s Twitter account tweeted, “Against all odds: a great victory for the Likud. A major victory for the people of Israel!”

Netanyahu’s tone following his reelection has been of ebullient joy – he had been reported to be singing and dancing which is quite a change of pace for the stone-faced, slow-smiling prime minister. He has made his party and himself out to be the underdog in the election, up against monsters who want to destroy Israel. He has made himself out to be the only person who can run Israel.

But does he represent a victory for the people of Israel? We should remember that only 23% of the voters voted for Netanyahu’s Likud Party. The Zionist Union, led by Isaac Herzog and Tzipi Livni, received 18% of the vote. The Arab party, Joint List, led by Ayman Odeh, received a stunning 10% to put the party as the third largest constituency in the Knesset – an amazing feat in such a polarized Israel. It will be fascinating to see how the strong presence of this party affects the Knesset and future proceedings.

It is the task of the Likud Party now to form a coalition with other parties to reach 51% of the 120 seats in the Knesset. Netanyahu looks to reach out to other far-right parties such as Yisrael Beiteinu’s United Torah Judaism as well as Moshe Kahlon’s Kulanu. Kahlon used to be a member of Netanyahu’s Likud party, but splintered off over differences of socio-economic and diplomatic policies. Kahlon has not yet declared if he would join a coalition with Netanyahu and if he chose to side with Zionist Union, then Zionist Union might have the upper hand in forming the leading government.

But besides these right-leaning parties, there is trepidation and hesitation in forming a coalition with Netanyahu. The Arab party seems happy to exist by itself outside of any coalition. Herzog’s party might join with Netanyahu’s, but the diversity of opinion in the group might cause an internal clash. (It could turn into a President Obama and a Republican Congress style conflict.) Do other parties want to join with a man who has disregarded every possible ally, spit in the face of possible peace solutions, and gained a reputation of waging asymmetrical wars?

Israel prides itself as “the only democracy in the Middle East” and that it is a peace-seeking nation with a firm desire to create a solution for the Palestinian-Israeli conflict. Everything that Netanyahu has done over the past three weeks has flown in the face of these principles.

We have seen how Netanyahu will do anything to stay in power: go behind President Obama’s back to Congress, spook many European states who have been working hard to find a solution for the Palestinians; and deter monumental diplomatic talks with Iran. He has become a hard man to do business with. How should the U.S. – who has hosted several conferences on the hope of either a two-state solution or a peaceful truce – deal now with a leader who will never consider these goals?

Netanyahu’s reelection and campaign has shown a startling vision of future relations with Israel that is only growing more extreme in its policies and isolated in its diplomacy. His actions smack of unsportsmanlike conduct and soon nobody will want to play the game with him.