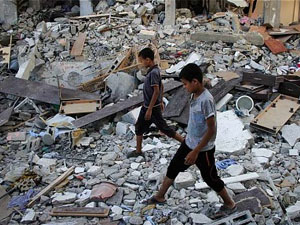 Ramadan 2014 was approaching. I had been waiting for this month all year. It was a time for spiritual reflection, increased worship, long hours in the mosque for night prayers, internal serenity, and forgiveness from our God. This year was different. This year there was no internal serenity. This year I was hurting, grief-stricken, heart-broken, I was sobbing at my TV. And how could I not when Gaza was being blown apart, torn into pieces, it was being destroyed right in front of my eyes and I could do nothing. It seemed like the world did nothing.

Operation Protective Edge Israel called it. The aim was to stop rocket fire from Gaza. The aim was to kill Hamas militants. The aerial offensive started July 8th and carried on to August 26th. Over 2,100 Palestinians died and over 10,000 were injured. The U.N. said that 7 in 10 Palestinians killed were civilians. More than 65,000 Gazans lost their homes and 161 mosques were destroyed. But the worst part, the part that cannot be quantified is the psychological trauma this attack had on the people of Gaza – specifically the children.

Gaza is a very small strip of land at 139 square miles, about twice the size of Washington, DC. So any shelling is likely to be felt and heard across the area. For the duration of Operation Protective Edge, Israel dropped between eighteen to twenty thousand tons of explosives on Gaza. Take that in for a moment. That is equivalent to the first atomic bomb the U.S. dropped on Japan during World War II.

My fingers tremble as I remember the live coverage of the bombing. Women, men, and children hastily being carried out of ambulances and into hospitals that lacked proper medical equipment. Parents looking for their children amongst the rubble to find their body parts scattered. Toddlers 2 and 3 years old lying next to their dead parents waiting for them to wake up.

It’s been seven months since the final ceasefire, but the effects of the battle still linger. UNRWA reported the rate of Post-Traumatic Stress Disorder amongst children in Gaza has doubled. This means they have constant flashbacks of the trauma, increased arousal, hypervigilance, and emotional numbing. These children are also likely to suffer from “mood disorders, anxiety, depression, problems with attachment and develop antisocial personality traits.” These conditions undoubtedly affect their performance in school. After the 2012 Operation Pillar of Defense attack 75% of teachers reported a decrease in the academic performance of their students. That number is probably much higher after the 2014 attack.

Worse yet, this winter five children froze to death as temperatures in Gaza hit the lowest they’ve been in years. This is a result of the failed reconstruction mechanism set by the U.N. Currently, conditions are worse off than they were several months ago; in fact now there are 100,000 Palestinians displaced and there’s virtually no rebuilding taking place. Thousands of Gazans still live in tents that many share with other families for lack of enough tents. Others choose to stay in their half-bombed homes and try to live as normally as they can. Even when their children try to go to school, they find many schools in ruins as well. This level of degradation and hopelessness enforced by the continuing blockade by Israel has only been intensified with further constraints from neighboring Egypt. Abdel Fattah Al-Sisi, the Egyptian President, closed the Rafah border between his country and Gaza, forcing the Palestinians to literally be trapped in the prison that Gaza has become. Even further, the Egyptian Court declared Hamas a terrorist organization two days ago – possibly as a precursor to joining any future attack on Gaza by Israel.

With Gaza still blockaded, children have no hope of escaping. Israel has them imprisoned from the north and Al-Sisi from the south. Their electricity and water are frequently cut off, their prices inflated, and many areas are still uninhabitable. How can children whose whole lives have been spent with their human rights violated comprehend how Israel is “justified” in its attacks against them? They can’t. And that’s why they end up growing up to fight injustice and retaliate against these forces that traumatized them and destroyed their family. This has become their self-identity.

As the West continued to support Israel financially through this conflict and the rest of the world remained silent, Gazans learned that they have only themselves to rely on. Various groups within Gaza have had to work together to rebuild, defend their land, and support their children as best they can. As a Palestinian-American living in Chicago, it is difficult not to feel anger toward both Israel and Egypt, as well as frustration at the world that turns a blind eye on Gaza. As I follow the daily injustices inflicted on all of Palestine, I still see hope at the end of this dark tunnel. Even given the traumatization and anxiety levels that Gaza’s population now bears, I can only imagine how living through and fighting injustice has reflected on the character of Gaza’s youth. They embody strength, greatness, dignity, and above all, justice.