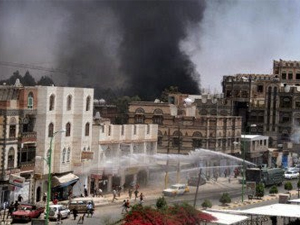 This is the story of the Yemeni American Nasser family from Chicago who tried to follow the State Department’s advice and head for the Indian ship that would be sure to rescue them from Yemen. But after hours of working their way to the port of Aden, avoiding snipers and bombings, paying the captain of a small fishing boat to take them to the Indian ship, the ship’s captain informed them only Indian citizens would be taken on board.

Saleh Nasser traveled to Yemen to take his wife and two small children (both under 2 years old) to the U.S. Embassy in Sana’a to pick up his wife’s green card that had been finally granted after five years of waiting. Once they made their way from Aden to Sana’a, the embassy was closed and all of the U.S. diplomats and other personnel were already evacuating the country. The Nassers were left to their own devices.

At the time, the State Department Yemen Crisis page, indicated that there was an Indian ship that would be leaving the next day from the port of Aden and there was a chance they would allow U.S. citizens to board the boat. But there was no indication that the State Department even contacted the Indian government or navy to obtain their assistance with evacuating U.S. citizens. The Nassers would find this out at the very last minute.

The Yemen Crisis page was also very explicit (and still is today) that:

There are no plans for a U.S. government-coordinated evacuation of U.S. citizens at this time. If you wish to depart Yemen, you should stay alert for other opportunities to leave the country.

The State Department Crisis Page and the Travel Warning for Yemen both told the Nassers about the extreme danger of conditions and warn “U.S. citizens of the high security threat level in Yemen due to terrorist activities and civil unrest,” but offer few suggestions other than “some foreign governments may arrange transportation for their nationals and may be willing to offer assistance to others.” But it’s pretty clear the U.S. is not one of those governments willing to help its own citizens and the Nassers could not expect anything even if they succeeded in making it to the Indian ship.

So Saleh Nasser, his sister Ruqayah (both of whom are U.S. citizens), his wife, two children, and his father’s wife all headed to the port in Aden from Sana’a to take the only chance they had of leaving. They were not allowed to take their car as the streets were closed because of the danger of attacks. The usual 35 minute drive became a two and a half hour walk to Aden.

Reaching the port, there were thousands of people at the harbor trying to get to one of the rescue ships far out to sea. Saleh’s uncle who lives in Aden near the port used his connections to find them a fishing boat that would take them out to the Indian ship. Even this part of the trip was dangerous as there were reports of snipers firing at the fishing boats. After four hours in the small boat, they reached the ship only to be turned away as the ship would only take Indian citizens. After making multiple calls, the Indian captain relented, but said he would only take Saleh and his sister as they were the only U.S. citizens. After pleading with the captain to let his children and father’s wife to board, they were all allowed on the ship except they had to leave everything behind except for small carry-ons. All of their clothes were left in suitcases on the fishing boat which headed back to port. (Their luggage which included some jewelry was stolen by the fishing boat captain. Only some of the jewelry was later recovered by Saleh’s uncle.)

After arriving in Djibouti, the U.S. embassy did welcome them and allow them to finally call home to let their Chicago relatives know they were all right. After waiting for 2 hours in the hot sun, they were finally taken to a hotel. Unfortunately the hotel is costly and the embassy does not assist with any expenses. The family is looking for an apartment to stay in while they wait for Saleh’s wife’s file to get transferred to Djbouti so she can get her green card and passports for the children. This is expected to take 6 weeks. The Djbouti authorities are requiring 3 day visas so every three days Saleh has to get a $90 visa for each person in the family. Saleh’s older sister, Iman, back in Chicago, called to request that a visa be expedited for their father’s wife and was told that it would take 60 days to decide whether to expedite it or not.

So the Nasser family is now stuck in Djbouti, trying to handle the mounting expenses of the hotel, apartment, and visas while they wait for approval so that everyone can come home to Chicago. Each day means washing the only set of clothes they have – the ones they were wearing on the ship. Although they are grateful for being one of the lucky few who got out of Yemen safely, they did so with no help from the U.S. State Department.