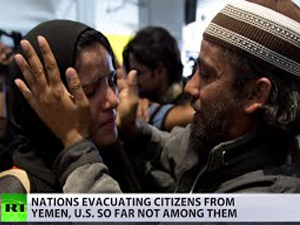 There are thousands of U.S. citizens trapped in Yemen who have pleaded with the U.S. government for rescue to no avail. Many of these people are relatives of Chicago Yemeni families who have been seeking ways to bring their relatives home to Chicago. When people from multiple other countries including Russia, China,  and India have already been rescued, it is difficult to believe the U.S. State Department’s excuses for not saving our own citizens. If this was not Yemen and these were not U.S. citizens of Yemeni descent, there would be a line of U.S. warships lined up at the Aden harbor.

The intensifying violence has trapped hundreds of U.S. citizens, including dozens of Chicagoans, in the rapidly deteriorating situation in Yemen. After evacuating embassy staff from the country on February 11, 2015, the U.S. Department of State suspended all operations. The State Department has since failed to facilitate travel or evacuation for U.S. Citizens who were not U.S. embassy staff. Even now according to the State Department Yemen Crisis page, updated on Saturday.

There are no plans for a U.S. government-coordinated evacuation of U.S. citizens at this time. If you wish to depart Yemen, you should stay alert for other opportunities to leave the country.

The State Department Crisis Page and Travel Warning for Yemen both warn about the extreme danger of conditions and warn “U.S. citizens of the high security threat level in Yemen due to terrorist activities and civil unrest,” but offer few suggestions other than to look for “some foreign governments may arrange transportation for their nationals and may be willing to offer assistance to others.” But it’s pretty clear the U.S. is not one of those governments willing to help its own citizens.

One of the Chicago members of a Yemeni American family interviewed for this article, Wafa, stated that there was a conference call in Chicago with the State Department, when the families were told that their relatives should have left in February and since there is a no-fly zone over the country, there is nothing to be done. As Wafa explained, since there are two U.S. naval ships nearby, there is no reason they could not be used to evacuate U.S. citizens from the port city Aden.

The lack of any cooperation from U.S. government officials has been a consistent theme in talking with the Chicago families. Contacting Senators Dick Durbin and Mark Kirk, Representative Mike Quigley, or local representatives offices has only led to a referral back to the State Department. As other sources have reported,

The U.S. Embassy is shuttered, with all the diplomats and security guards taken to safety weeks ago. From Washington, the State Department directs remaining citizens to hotlines that don’t work and to foreign embassies that can’t help, leading many stranded Americans to summarize the Obama administration’s response as: Good luck.

What is the most current situation in Yemen? The Saudi-led coalition bombing campaign and fighting between pro-Saleh government forces and the Houthis has only intensified. Repeated calls from Iran for a ceasefire in Yemen have been rejected by Saudi Arabia. “How can Iran call for us to stop the fighting in Yemen? … We came to Yemen to help the legitimate authority, and Iran is not in charge of Yemen,” Saudi Foreign Minister Saud al-Faisal said Sunday at a joint press conference in Riyadh with his French counterpart, Laurent Fabius. A Chicago family who still has relatives in Aden said they had reported on Sunday that they were trapped inside their houses by Houthi and pro-Sala government snipers on the tall buildings. They said the Saudi-led coalition is still bombing Houthi headquarters and ammunition dumps in Aden directed by informants on the ground. This leads them to believe that Saudis had planned for this attack for some time as their network of informants was extensive and accurate in their information.

Another Chicagoan interviewed for this article, Naser, said his older brother and family (all U.S. citizens) are still trapped in Aden where now there is no food and they have been subsisting on cookies and water. They have to move from apartment to apartment in their mostly empty building to avoid the bombing. The family is waiting for safer conditions to approach the rescue ships in the harbor after one had an explosion and another only put down ropes for people to climb onto the ship.

In examining the map, anyone trying to leave from Sana’a or Aden where the attacks are the most intense would either have to travel by land to Oman through Al-Qaeda of the Arabian Peninsula (AQAP) territory or take a small boat out from the Aden port to one of the rescue ships in the harbor while the city is under attack by both the Saudi-led coalition and Houthi forces.

Chicagoan Naser, also said his brother-in-law Saleh was able to get himself, his wife, sister, and two children under 2 years old onto an Indian ship. The people who are desperate to leave Aden fight their way onto small fishing boats that take them to rescue ships from countries like India waiting in the harbor. He had heard of accounts where the ships turned away anyone without an Indian passport, but the ship Saleh boarded did accept him. Saleh was able to pay the price for his family and has arrived in Djibouti. His family was moved by the U.S. embassy to a hotel nearby to wait for the visa paperwork for his wife, the only family member not a U.S. citizen. Saleh has to pay for the hotel himself and will look for an apartment given the  long wait for the visa to be approved. Today ABC News is reporting as of a few hours ago that 140 U.S. citizens have arrived in Djibouti from Yemen. Naser’s older brother and many other friends and relatives are still trapped in Yemen.

Chicagoan Wafa described the ordeal of her aunt and two of the aunt’s daughters, ages 15 and 7 (both U.S. citizens) who were stuck in Yemen until last Friday when they were able to escape on a ship headed for Djibouti. For the usual 2 hour trip by sea from Aden to Djibouti, the aunt and two daughters stood on the deck of the ship for 14 hours before they could get off in Dijbouti. The U.S. embassy will be conducting an interview for the aunt’s visa on Monday and hopefully then she will be able to return to Chicago with her daughters. Her 10 year old daughter has a serious illness and was brought back to Chicago by her uncle on the last plane out of Yemen in March. She is currently in Chicago recovering from her illness and the family is hoping the return of her mother and sisters will improve her health situation.  The 15 and 10 year old were born in Chicago. The 15 year old attended elementary school in a Chicago Public School before she went to live with her mother in Yemen.

Multiple organizations and private citizens are taking action to pressure the State Department to meet their responsibility to take care of U.S. citizens no matter where they are from or what the circumstances of the danger. If multiple other countries are providing evacuation for their citizens, there can be no reason other than Yemeni Americans not being provided the same rights and considerations as other American citizens.

In an attempt to help Yemeni Americans currently stuck in Yemen and to put pressure on the State Department to take action, The American-Arab Anti-Discrimination Committee (ADC), the Council on American-Islamic Relations (CAIR) and Asian Americans Advancing Justice-Asian Law Caucus (ALC) have launched a website titled StuckInYemen.com. So far over 400 people have registered through the website yet the State Department has not released a plan of evacuation.

On Thursday, CAIR, ADC, and ALC held a news conference outside the U.S. District Court in Washington, D.C., to announce the filing of a lawsuit to facilitate action to evacuate American citizens trapped in Yemen. The plaintiffs in the lawsuit are 41 American citizens or permanent residents currently stuck in Yemen, many of them with their families. Staff Attorney Rabya Khan, CAIR-Chicago commented

While other countries like Russia, China, and India have evacuated their citizens, it is appalling that our own government has failed to protect and evacuate US citizens and subject them to dangerous and life-threatening conditions by abandoning them in Yemen.

According to the Washington Post, India has lead the evacuation efforts, helping over 550 people from 32 countries escape including dozens of Americans.