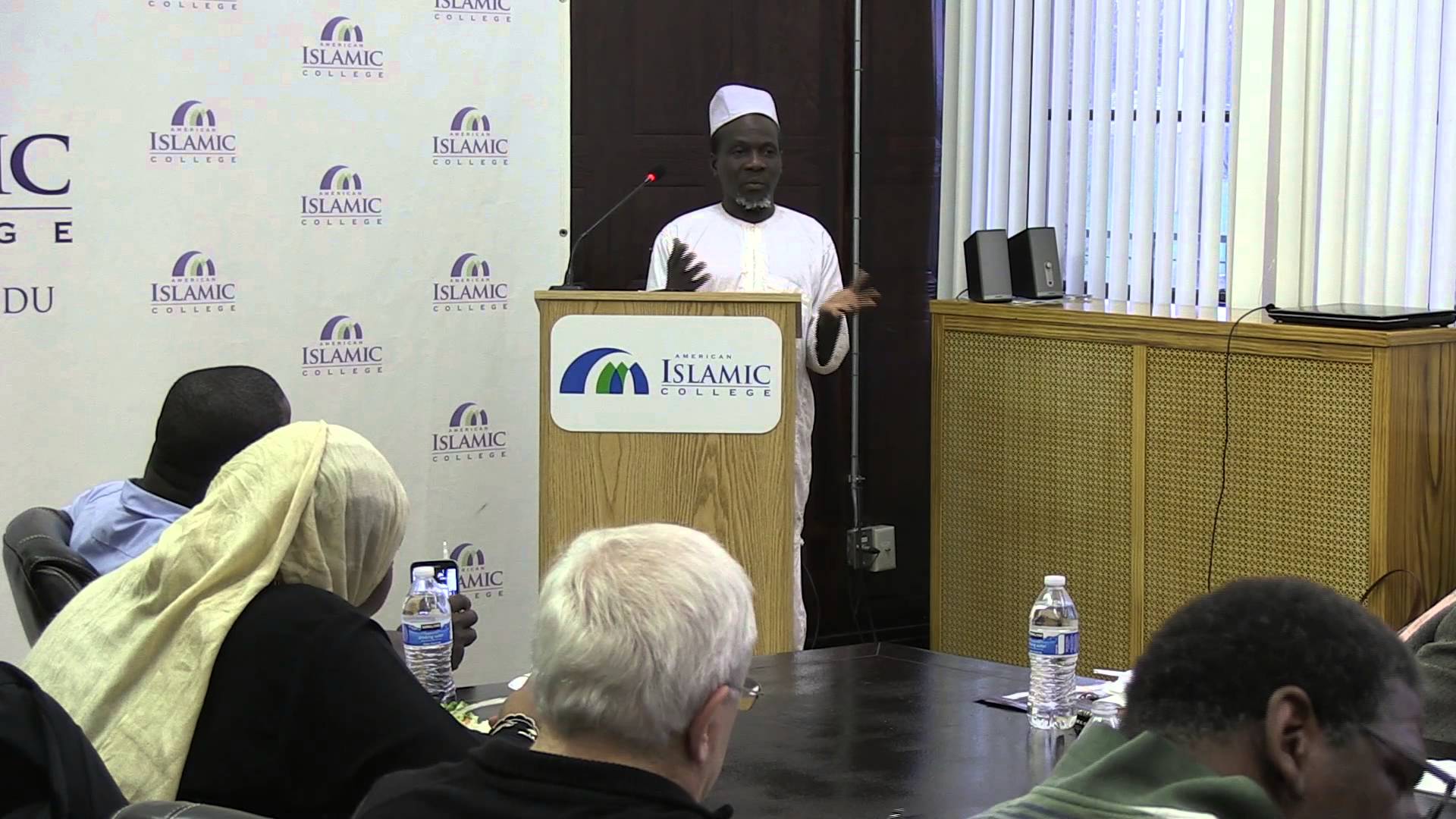 Dr. Ibrahim Hassan, an Associate Professor at the University of Jos in Nigeria, and a Fulbright scholar at Northwestern University spoke at the American Islamic College on the “Rise and Development of Violent Islamic Insurgency (Boko Haram) in Northern Nigeria” Students, faculty, scholars, and members of the larger Chicago community were in attendance. The Chicago Monitor also had the opportunity to interview Dr. Hassan to expand on some of the points during his presentation. Much of his presentation was focused on correcting the misconceptions about their historical development and the level of support they have within northern Nigeria.

Boko Haram in the News

The typical news presentation about Boko Haram occurs when there is some horrifying act that they perpetrate such as the attack and kidnapping of 200 school girls; destroying the villages of Thlaimakalama and Gatamarwa in Nigeria in February, 2015 and massacring its inhabitants; and declaring loyalty to ISIS in March. Rarely is there a discussion about the reasons for the rise of this violent Islamic group in Nigeria.  Are they any different from Al-Qaeda or ISIS? How much support do they have among Nigerian Muslims? Why hasn’t the Nigerian government eliminated this group? Dr. Hassan was able to provide some answers to these questions as well as to explore some myths that are propagated in the news.

Origins of the Name

The group doesn’t like the name “Boko Haram” which means “Western education is forbidden” and it is only applied to them in cynical reference to their pronouncements denouncing Western education. As they developed from 1995 they had many different names and their current official name is Jama’atu Ahlis Sunna Lidda’awati wal-Jihad, an Arabic term meaning “People Committed to the Propagation of the Prophet’s Teachings and Jihad”. They claim to be waging jihad and promoting Islam. The group had had skirmishes with security forces a number of times from when it was founded in 1995, but did not turn fully violent until 2009 when the Police killed their leader in an extra-judicial manner.

They also reject secular government and believe that it is not right for Muslims to work under a government not led by Muslims applying the shariah laws. Dr. Hassan explained that their beliefs are contrary to a long history of Western-style education and secular government in Nigeria, which Muslims have come to embrace. Many Muslim scholars debated with them showing instances in the Qur’an where Prophets (like Joseph) served under non-Islamic governments under the leadership of non-Muslims. In addition, throughout Islamic history, Muslims have learned significant knowledge of the sciences under non-Muslims.

Factors in Their Development

Dr. Hassan said there are many factors for the rise and development of Boko Haram, but the strongest of them is the weakness of the Nigerian state. Boko Haram could have been eliminated in its formative stage if not for the inefficiency and corruption in the police and judicial system. On several occasions the leaders of the group were arrested, but released on bail and never prosecuted.

The geography of their area of operation is one factor in their growth. They operate in Borno state in northeastern Nigeria, the largest state in territory sharing long porous borders with Chad, Cameroon, and Niger. There are thousands of routes over these borders, which allows for easy movement of arms and conscripts from the neighboring countries. This area was part of the large Kanem Empire that eventually became Muslim under the Sayfawa Dynasty in 1085. So networks of trading and Islamic education have been established in this area for hundreds of years. The jihad of Shehu Usuman Dan Fodio created a unified Sokoto Caliphate stretching across northern Nigeria into the neighboring countries that lasted from 1802-1812. Boko Haram appeals to this history of empire and a united people in providing an attractive identity for their foot soldiers.  At the time of the colonization of Nigeria, Islam was already well established with an educated populace in Islam employing Arabic literacy. Therefore when Western education was introduced and it lacked the “moral education” along with the other subjects (as was true in the existing Islamic education) the people thought that was ‘fraudulent’ and a ‘deceit’ which is another meaning of “Boko Haram” – that the Western education was “fraudulent” or “not what we expect.” Nonetheless in the course of time with mobilization by government and non-government organizations, Western education was gradually but surely accepted and well cultivated.

Inside and Outside Views

Early on in the development of Boko Haram with the growing acceptance of Western education, the general Nigerian populace did not take the group seriously. The Boko Haram group itself employed western equipment (radios, videos, etc.) for their preaching, their leaders drove expensive cars and adopted many western home life-styles. Also the leaders had good relationships with many of the heads of the separate states of the country and only became violent in 2009 when the government attacked them and their leader was killed.

Outsiders often believe that the poverty of Northern Nigeria is a factor in recruiting for Boko Haram, which is true in a way, but the area has a strong informal economy, which does not show up in statistics. The weakening of the informal economy due to absence of government-supported infrastructure enabled the economic attraction, if any, to joining the group. Local politicians and businessmen, as well as loot from banks and markets and kidnappings for ransom also fund the group. Another factor contributing to the development of Boko Haram is syncretism (mixture of Islam with local culture and religious traditions) and cultism (using verses of the Qur’an for magical and cultish purposes – the promise of wealth or eliminating enemies). The leaders and members of Boko Haram have only a “skin deep” knowledge of Islam and they have spent very little time educating the public before they embarked on their ill-conceived “jihad.” Their founding leader, Mohammed Yusef, was a charismatic preacher who started preaching at a mosque of a very rich Nigerian businessman who was a friend of the Bush family. After Mohammed Yusef was thrown out of that mosque when he started preaching his anti-Western ideas, he established his own small compound with a living area, small mosque and school. But Boko Haram did not establish any formal schools that followed a specific theology.

Mohammed Yusef particularly drew from the writings of Ibn Taimiyyah (13th century Islamic scholar and theologian who inspired Muhammad ibn Abd al-Wahhab among others). Boko Haram would likely subscribe to Sayyid Qutb and Abd al-Wahhab if it suits them, but there is no evidence that other Islamic theologians have inspired their thinking. Dr. Hassan doesn’t subscribe to the conjecture that they were indoctrinated by the writings of the “so-called Islamist ideologues.” This concept is very misleading even if it is evidenced for al-Qaeda, ISIS, and other groups.

The West tends to consider Muslim and Christian conflict in Nigeria as a conflict between northern and southern Nigeria and that is viewed as a major factor in the development of Boko Haram.  There were attempts to view the 1967-1970 civil war in Nigeria in religious terms, but that failed. Characterizing the tension between northern and southern Nigeria as being a Muslim and Christian conflict is too general. There are many explanations to that tension. Other factors included a general northern/ southern geographic split and ethnic conflicts.  Boko Haram attempted to rekindle the ethno-religious conflict that reached its zenith in the Plateau state area where Dr. Hassan lives, but did not succeed because the underlying factors of that conflict in reality were economic and not religious.  A group like Boko Haram will construct “religious identities” to gain outside support. In order to legitimize what they are doing, Boko Haram started off by killing Christians and attacking churches in order to attract the support of the Muslim population to their cause. In this way, they try to take advantage of religious tensions that do exist. But in fact, Dr. Hassan indicated, the group ended up killing as high as five times more Muslims than Christians and has attacked, kidnapped and abused as many as ten times more Muslim women than Christian women (274 girls from the Chibok School and more than 2,000 Muslim women according to recent
Amnesty International report).

It seems counter-intuitive that the government has not been able to defeat the group in the six years since it has grown to become vicious. The U.S. estimates Boko Haram has between 7,000 and 10,000 fighters, while the Nigerian government has more than 100,000 soldiers (army, air force, navy) excluding police and other para-military outfits – the latter with very little or no local support from the civilian populace. Yet the government could not defeat Boko Haram over a period of six years. The real issue behind the weakness of the government is corruption. Before the election, President Goodluck Jonathan made a pledge to destroy Boko Haram to gain public support, but the effort was not successful. It was during this period while they were under attack that the group pledged allegiance to ISIS more as a public relations gesture. Most Nigerians did not take it seriously.

The group has only affected Dr. Hassan personally as there was some perceived risk for having written a paper published online about Boko Haram and for his researches on radicalism generally.  But he said he did not let the risk bother him.  He knows Professors, among them Christians, that continue to live their lives at the University of Maiduguri, the very epicenter of Boko Haram, without succumbing to any threat.

In order to stop Boko Haram, Dr. Hassan stated that multiple approaches were needed. An improvement in education is vital and urgent. Education (both western/modern as well as Islamic) needs to be more functional and of relevance to the immediate environment of Northern Nigeria. The generally poor state of education in Nigeria is not well understood and stakeholders interested in arresting terrorism would do well to turn their attention to the area of education and knowledge generation.  Like for many other developing countries, the utility of western/modern education within the West and the Islamic education within the Arab world is simply not the same as what is available in Nigeria. There also needs to be an improvement in the economic conditions and job opportunities to end the allurement of enlisting in Boko Haram. African nations should unite in an effective manner, with the strong support of the West, especially the U.S., to fight Boko Haram and insurgency in whatever form. Dr. Hassan also believes that the U.S. should lead in the establishment of democratic principles. The U.S. also has an important role to play in helping the newly elected President Muhammadu Buhari to fulfill his promise of finally destroying Boko Haram, fighting corruption, and strengthening the Nigerian economy.

Dr. Ibrahim Hassan is Associate professor of Islamic Studies at the University of Jos, Nigeria. He is currently a Fulbright Visiting Scholar at Northwestern University. His research interests include Islam in Nigeria, Islam and Development, Islamic Radicalism, and Counter-radicalism.