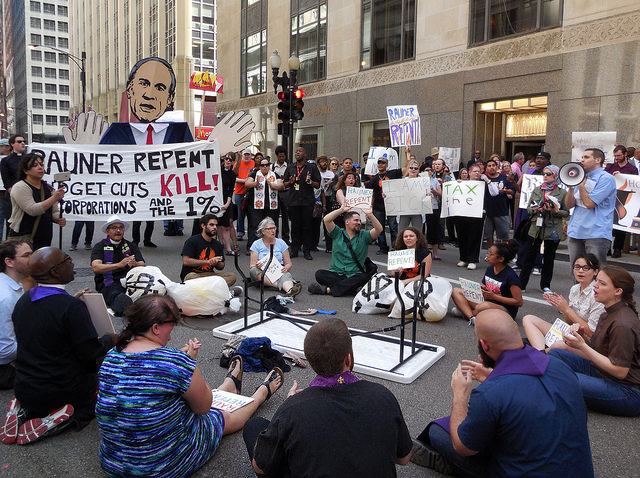 During last Friday’s start of a holiday weekend, Governor Rauner cut off funding for all immigrant services in Illinois effective immediately. As a result, immigrants across the state lose access to assistance regarding US citizenship, health care, nutrition, and other critical services. Immigrant rights groups are organizing to fight this attack. It was not hard to see this coming. From the introduction of his budget to executive actions like this, Governor Rauner continues to take actions based more on his conservative ideology than fiscal responsibility.

The immigrant services funding cut was part of a suspension of $26 million in social services and public health grants that the Governor stated was a beginning to address the $1.6 billion shortfall in the current state budget. A list of programs targeted included funding for the funerals and burials of public-assistance recipients, Westside health services, addiction prevention, homeless assistance, autism, epilepsy, and HIV and AIDS programs. The vast majority of the programs cut support the most vulnerable citizens of Illinois. Out of the $26 million suspended funds, $3.4 million in immigrant services was frozen through June 30 – the end of the state’s fiscal year. This action means that immigrant services programs already set up and funded through June 30 will have to close down.

The Governor’s position on immigration reform and services has always been a question mark. Even back in March, the Governor was backing “comprehensive reform” in immigration policy as well as refusing to join other GOP governors in a lawsuit against President Obama’s immigration executive action. But an ominous hint of his actual position was made apparent when he cancelled two immigrant-related executive orders by former Governor Pat Quinn. One that prohibited state law enforcement agencies from stopping anyone based solely on citizenship or immigration status and the other that providing ways to help immigrants benefit from Obama’s executive action on curbing deportations. These recent cuts in immigration services would appear to be part of a pattern of the Governor’s ideological approach to immigration “reform.”

The Illinois Coalition for Immigrant and Refugee Rights (ICIRR), a statewide coalition of more than 130 organizations, in a press release on Friday, described two immigrant services programs that would be immediately affected by the Governor’s announcement.

“These programs have each assisted hundreds of thousands of Illinois immigrants on their path to making greater contributions to our state. Immigrants who receive assistance from the 61 community organizations funded…have found better jobs, started businesses, and given back in multiple ways to our state.”

There is significant concern that these cuts will become permanent as Governor Rauner’s proposed budget for state fiscal year 2016 eliminates all funding for immigrant services.

Given that the Immigrant Services Line Item (ISLI) in the 2015 state budget is $6.67 million, only .01% of the total state budget, it is hard to see these cuts as anything other than ideologically driven. In late March, the General Assembly passed emergency legislation to fix the fiscal shortfall for the current fiscal year. This legislation preserved ISLI funding. Governor Rauner’s suspension of these same funds by executive order, ignoring the wishes of the legislature, further supports the argument that his actions are based on ideological positioning and not fiscal responsibility.

The suspension of funds also occurred two days after the leaders of ICIRR and their allies held a press conference last Wednesday calling for Governor Rauner to reinstate ISLI funds in the 2016 fiscal year budget. They presented the results of a survey of immigrant services organizations on the effects of this funding being cut:

About 85 percent of the groups surveyed said they would be unable to support their current staff if the line item is completely cut. Overall, fully defunding the line item could result in 229 layoffs among the immigrant-serving organizations, 18 of which employ seven or fewer full-time staffers, according to ICIRR.”

So Governor Rauner’s response two days later was not only to uphold the cut in ISLI funds for 2016, but to freeze the remaining funds for ISLI programs through June 2015. There was significant push back to Governor Rauner’s proposed budget for 2016 from the Illinois State Legislature and a strong indication he would not be able to push through his proposed one-sided budget cuts. Rather than listening to his constituents and their elected representatives, the Governor has decided to become the personal financial manager of Illinois. ICIRR is only one among many social service organizations that will be fighting for the financial management of Illinois to be returned to the legislature.

Today, Wednesday April 8 from 12PM to 1PM, ICIRR and its allies are holding a rally at the Thompson Center, 100 W Randolph St., Chicago to call on the Governor to restore immigration services funding for fiscal year 2015, and continue this funding for the next fiscal year.

Why is the Anti-BDS Lobby Celebrating Their Non-Victory in Illinois?