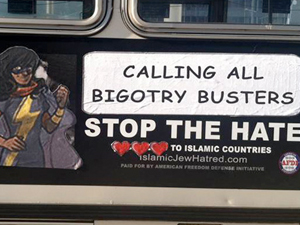 The past year has undoubtedly ushered in a new era for identity relations in America; with the police killings of black men in Ferguson and New York, the partisan fueled arguments over immigrant amnesty and the ‘religious freedom protection’ laws targeted at LGBTQ communities introduced in several states, racial and religious tension saturated our media climate in 2014. With 2015 well underway, these tensions continue to permeate several facets of American life. Notably in March, Starbucks launched their ill-conceived and eventually retracted ‘Race Together’ campaign aimed at sparking a national conversation on race in between latte orders. With the seemingly ever-present discussions and debates regarding identity based discrimination and its subsequent role in modern American society and government, I found myself questioning how American Muslims were fairing in this contentious climate—what is the status of Muslim discrimination in America? Are Muslim communities in the U.S. facing similar tensions and most importantly, how is the U.S. government addressing potential discrimination? To tackle these questions I took inventory of some key problems, as well as federal, state, and local legislative actions that have affected Muslim American communities across the nation in the past year.

The year 2014 kicked off with a promising start for American Muslim communities. In April the New York Police Department announced the disbandment of its clandestine Demographics Unit. The unit was implemented in the post-9/11 era and consisted of spying and data-gathering on Muslim religious communities in the New York City area. Although the NYPD themselves admitted the unit failed to produce a single lead on potential terrorist activity, its disbandment in April 2014 was met with resistance from conservative law makers. Congressman Peter King (R-NY) reprimanded the decision to NewsMaxTv, stating, “We have to monitor what’s happening in those communities and we have to be quick to call it terrorism.” Representative King continued on to refer to mosques as “incubators of terrorism”.

The following month, the civil rights group Muslim Advocates released a report detailing a preponderance of anti-Muslim hate speech transmitted via internet forums and social media. The report revealed evidence of hate speech perpetuated via Islamophobic activists and hate groups, as well as publically elected officials across the country. The issues raised in the report were addressed via a proposed bill entitled the Hate Crime Reporting Act of 2014 (H.R. 3878), introduced by Congressman Hakeem Jeffries (D-NY) and Senator Ed Markey (D-MA). The bill called for an amendment to section 155 of the National Telecommunications and Information Administration Organization Act, requiring a report on the role of telecommunications in hate crimes. The bill further called for an analysis of information regarding the use of internet communications in the advocacy for and commissioning of hate crimes. Although the bill received support from over 40 national civil and human rights organizations, it failed to gain traction and died in the House. 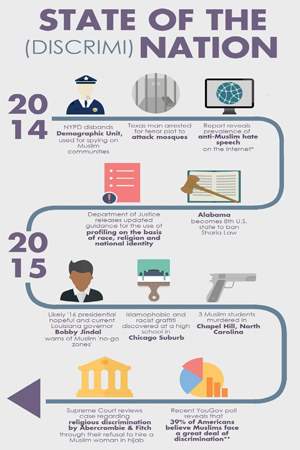 At the state level, 2014 brought forth anti-Muslim legislation in the form of actions to ban Sharia law. According to a report by the Brennan Center for Justice, similar legislation has been brought forth in over 32 states in the past three years. In November, Alabama became the eighth state to outlaw Sharia law, joining the likes of Kansas, North Carolina and Louisiana. Such legislation operates under a thinly-veiled guise of protecting states from the supposed threat of international law; however, it fuels anti-Muslim sentiment and generates fear over a nonexistent threat. The trend of anti-Sharia legislation began with Oklahoma’s 2010 “Save Our State” amendment and has carried into 2015 with State Representative Chip Limehouse (R) sponsoring a similar bill in South Carolina. Limehouse defends the legislation, arguing that the U.S. is at war with radical Islam; the bill will be discussed by South Carolina lawmakers soon and is expected to pass.

The end of 2014 concluded with the issuing of an updated guidance by the U.S. Department of Justice (DOJ) regarding law enforcement profiling on the basis of race, ethnicity, gender, national origin, religion, sexual orientation, or gender identity. The DOJ released an initial guidance on racial profiling in June 2003. However, the guidance received criticism from various Muslim and civil rights organizations for its providence of exceptions on the basis of “matters of border and national security” and its failure to prohibit profiling on the basis of religion or national origin. Calls for a revised DOJ guidance continued for over a decade, culminating in the December 2014 release. However, the updated guidance maintains several loopholes that exclude the Transportation Security Administration and the U.S. Customs and Border Protection and allows for the use of profiling at airports and vast border regions. Additionally, the updated guidance allows for the continuation of FBI mapping and data gathering of Muslim religious and ethnic communities across the U.S.

The early days of 2015 brought a series of anti-Muslim hate crimes, including violent threats against a mosque in suburban Chicago and the appearance of Islamophobic graffiti in communities in Maryland, Rhode Island, and Illinois. The execution-style murder of three Muslim students in Chapel Hill, North Carolina on February 10 garnered national attention and spurred debate regarding potential media bias in its portrayal of violence against Muslims. Weeks later a YouGov poll revealed that 39% of Americans believe that Muslims are victim to a “great deal” of discrimination in America today. The data additionally revealed that 52% of respondents believe the Islamic religion is more likely to encourage violence and 32% believe Muslim Americans are not patriotic and do not believe in American values.

The first instance of anti-Muslim legislation in 2015 was introduced to the state legislature of Tennessee by State Representative Susan Lynn (R) and State Senator Bill Kreton (R). The bill, titled H.B. 1141, seeks to prohibit so-called “no-go zones”, described as contiguous geographical areas with community organization that excludes the greater public. This idea stems from a concept falsely perpetuated by the cable network Fox News following the Paris terror attacks in January, claiming there are areas in major European cities run by Muslims and dominated by Sharia law. Although these claims were disproven and Fox News redacted and apologized for their remarks, U.S. lawmakers like Lynn and Kreton, as well as Louisiana Governor and potential 2016 presidential hopeful Bobby Jindal (R), continue to advance these falsities.

Thus far, this year’s first quarter proved tumultuous for Muslim Americans; with the 24/7 media coverage of ISIS inciting Islamophobic rhetoric from law makers and potential presidential candidates, one must question what new problems may arise for Muslim Americans in the coming year. Potential Republican presidential candidates have flocked to Iowa and the speculated hopefuls are not shy about their hard line stances on Islam. Former Arkansas Governor Mike Huckabee (R), who has expressed interest in a 2016 bid, voiced harsh criticism of President Obama’s support for the Muslim community. Governor Jindal recently declared that he believes individuals who believe in radical Islam should not be admitted in the U.S. As Jindal explained to Fox News’ Megyn Kelly:

America’s built on religious liberty…We don’t discriminate against anybody of any religion and certainly there are many Muslims that are proud patriotic Americans. That’s great. It’s also true there are radical Muslims — Muslims that want to treat women as second-class citizens, those who want to use our freedoms to manager others….You don’t have the right to come here and say for example you think women should be treated as second-class citizens.

With the upcoming campaign season and the recent inauguration of the 114th Congress, U.S. lawmakers and officials are tasked with establishing the agenda for new legislation at the state and federal levels. This provides opportunity for the advancement of anti-discriminatory practices and laws for the benefit of not only the Muslim community, but vulnerable minority communities on the whole. However, if recent trends continue, the current contentious climate around racial and religious identity relations may continue to threaten the civil liberties of these groups. As the year continues and the campaigns and legislation progresses, we must remain vigilant.