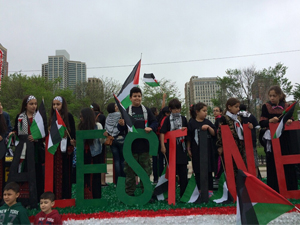 Facebook
Twitter
Pinterest
WhatsApp
Email
Print
A wedding, dance troupe and plenty of youth were just some of the highlights of the first-ever Palestinian Heritage Parade in downtown Chicago Saturday. Between 850 and 1000 Palestinians and their supporters congregated to walk among decorative floats and entertainment.

The parade took place from noon to 1 pm from Roosevelt Road and Columbus Drive to Columbus and Monroe Street in the heart of Chicago’s Loop. Though organizers were hoping for more attendees and bystanders, turnout still showcased Chicago’s 500,000-strong Palestinian population and culture. It’s timing, too, symbolized the Palestinian diaspora. The parade occurred six days before May 15, a day Palestinians call the ‘Nakba’ meaning “Day of the Catastrophe.” This day  symbolizes the beginning of the systematic dispossession of the Palestinian people and coincides with the birth of the state of Israel. The parade was put together by American Muslims for Palestine’s (AMP) Chicago chapter.

Arwa Abdallah, AMP’s education coordinator, worked on the parade committee with several other people, and said each committee member worked on a different float. “We at AMP wanted the parade to be as educational and telling as it could possibly be,” said Abdallah.

The floats were in chronological order of the Palestinian narrative. The parade started with a large Palestinian flag, then followed with floats showcasing: Abrahamic faiths, the Nakba, United Nations refugees, and post-1948 Palestinians. The parade ended with a traditional Palestinian wedding.

“We were very specific and played close attention to detail,” said Abdallah.

For example, the first float, which referred to Palestine as home of the Abrahamic faiths, displayed the Al-Aqsa Mosque and Church of Nativity in Bethlehem. The second float showcased the vegetative lifestyles of Palestinians before diaspora: greenery, orange and olive trees, strawberries and a fishing boat were displayed.

“The orange trees are very specific to Haifa; the boat was very specific to Acre; the olive trees specific to Palestine in general; and strawberries were specific to Gaza, said Abdallah. “We wanted to show there was life before diaspora and how they sustained life through their economy.”

In addition to showcasing life before the diaspora, the parade showed how refugees are coping today. One float had a tent and children in traditional clothing and satchels with their belongings to illustrate the plight of refugees. The Gaza float  had names and details of the operations against Gazans in the last 10 years A black pinwheel display symbolized the 586 children killed in Operation Protective Edge, Israel’s name for the assault on Gaza in 2014.

“We concluded the parade with a wedding and zaffa (celebratory introduction of the bride and groom) to show life goes on,” said Abdallah.

A DJ played Palestinian folk music throughout the parade, and a rapper, DubKMG, had his own float. Nida Ali, chairwoman of AMP-Chicago, says there were plans for more entertainment than actualized.

“We wanted to start at Monroe and Columbus, and end at Roosevelt and Columbus from inside the city to outside, and end at the park,” said Ali. “We wanted to have a picnic, tables with artifacts, show Palestinian food, but it ended early and not as many people came.” The parade was scheduled to run until 2 p.m., but ended at around 1 p.m. due to attendees marching with the floats instead of enjoying on the sidelines. Nonetheless, Ali was happy with the event overall. “If we had enough people we were hoping people would sit down and watch the themes,” said Ali.

Ali cites the cooler weather and other events scheduled the same day for lower-than-expected turnout. Saturday was a graduation day for people across Cook County. Nonetheless, the crowd was diverse in age, with representations from children, youth and elderly.

Though an annual Palestine parade occurs in Bridgeview, Illinois – also referred to as “little Palestine” – plans to transplant the parade to Chicago began four years ago. After receiving a parade permit over the past few weeks, AMP-Chicago set out to create a memorable parade.

“Our major purpose is to get out the word about Palestine,” said Tarek Khalil of the AMP board. “There’s people out there without a state and a lot to commemorate.”

Nadia Hannoun of Wheaton attended with her family. “It was awesome,” said Hanoun. “It wasn’t enough people but I loved it and seeing other families and a good number of youth.”

Still, hopes for future parades are high. Organizers hope to organize with AMP chapters nationwide and ensure few other events coincide with the parade.

The 2015 parade included the AMP dabke troupe, folk dancing and Palestinian pride, but Ali hopes it’ll be a part of AMP’s future calendar events. AMP hosts an annual conference in the Chicagoland area, and strives to teach the greater American community about the Palestinian people.“We have the convention, Nakba education committee, and we go to colleges and schools to show the Palestinian narrative,” said Ali. Board Member Khalil echoes her emphasis on the Palestinian narrative, and adds it’s important to showcase to more people. “Our existence is our resistance,” said Khalil.