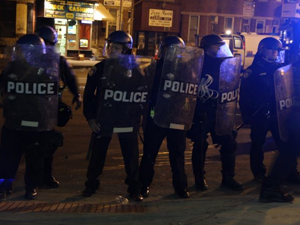 We do not learn about the long history of ongoing educational inopportunity, housing segregation and discrimination, or job discrimination. We do not learn about the development of black gangs to protect themselves against white gangs. We do not learn about police brutality and we most definitely do not learn how all of these factors combined contribute to the constantly deteriorating situation in black neighborhoods. As a result, we attribute high crime rates, drug-related issues, gang violence, and dependency on welfare in these “black places” as the fault of the black community. Their struggles are entirely their fault and a result of their inherent inability to pursue success.

Our education system is racist. It promotes racism, instills racism, and entrenches racism. I am not even speaking about our schools and the inequality of resources they have available to them. I am speaking about the ideas implanted in the mind of our youth. We have grown up with the impression that equality is abundant and justice has been achieved. This turns the blame from the result of historical racism back onto the victims: our black youth.

Let me make this abundantly clear: Baltimore is NOT burning. America is. People have taken to the streets to express their discontent over it. If we are failing our black youth, we are failing an integral part of our future. Freddie Gray’s death was the injustice that broke the system’s back and Baltimore is out in numbers to demand justice and claim control of its future.

Days of peaceful protests in Baltimore effectively did nothing. The media surrounding it was insignificant and most of America did not react. Thousands upon thousands of protestors filled the streets of Baltimore, Ferguson, Chicago, New York, and many other cities across the country. Only after the looting and burning of businesses in Baltimore began did the media come flocking faster than the National Guard or police. Perhaps Ta-Nehisi Coates is right: in today’s environment, nonviolence is compliance.

If a message cannot get across to America until buildings are burning, then who has the right to stop the buildings from burning?

What we are witnessing on TV and in other types of media is not a clash between dangerous rioters and those who seek to protect the remainder of the country. What we are witnessing is a clash between those who are demanding an end to institutionalized racism and those who are serving to protect the status quo. In reality, the police and the National Guard are militarizing the establishment and ensuring its protection and longevity. Protecting the status quo ensures the comfort of some at the expense of many others – those “others” in America happen to black and Latino.

What will it take for the entire country to understand that racism has been deeply imbedded in American culture, society, and policy? Surely we will not have to fight another war like we did in the 1860s. If the situations in Ferguson and Baltimore are not enough for America to understand that our black youth are dying to live, what will?

There is a deep and ever-widening divide between those who understand the struggle of Black Americans and those who only see the looting and burning. Each party continues to preach to the choir, reasserting to itself that its position and view is right. The answer is not “engaging in dialogue” and “bringing about mutual understanding” between these parties. It is about educating all of your youth about the long history of black oppression and disenfranchisement, and using that education as a building block to our future. Only then can we put out the fire that has continued to burn the opportunity for Black Americans to achieve any form of equality in this country.