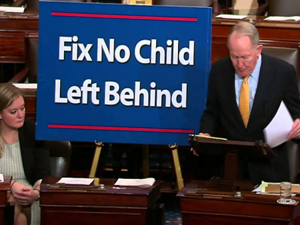 The No Child Left Behind (NCLB) Act, (NCLB) Act, signed and instituted in 2001, was a bipartisan effort first proposed by President George W. Bush with the backing of the late U.S. Senator Edward “Ted” Kennedy (D-MA). It was the latest authorization of the Elementary and Secondary Education Act of 1965, which was first passed and signed by President Lyndon B. Johnson. NCLB dramatically overhauled the U.S. education system, promising that all children would be proficient in math and reading by 2014. Moreover, this reform effort set the goal for the nation to claim the world’s top ranking in education. It is now May 2015, and that date has come and gone.

The United States ranks 14th in cognitive skills and educational attainment—a far cry from number one. But there are other unfortunate statistics about our education system, too:

• Two out of three 8th graders cannot read proficiently;
• Nearly two-thirds of 8th graders scored below proficient in math;
• Some 1.1 million American students drop out of school every year;
• After World War II, the United States had the #1 high school graduation rate in the world. Today, we have dropped to #22 among 27 industrialized nations;
• Less than half of American students, 46 percent, finish college – the U.S. ranks last among 18 countries measured on this indicator.

There is no doubt about the fact that these are unfortunate statistics and that something needs to change. The status quo in our education system is not working.

NCLB relies significantly on standardized testing to measure school and teacher performance. It mandates that every school must test every child in grades three through eight in reading and math every year. If schools do not perform at a particular level, that school is put on watch and warned to bring their testing levels up. If they do not, that school faces two end results. One is the school being shut down with its students different school across neighborhoods or town. The other option is going through the “turnaround” process, with most or all faculty and staff are fired, and the school is converted into a charter or some other school type. Many in Chicago may remember the Chicago Public Schools (CPS) Board voting last year to “turnaround” three elementary schools, which meant firing all the teachers and handing the schools over to the “Academy for Urban School Leadership (AUSL), a controversial school turnaround contractor.” This contractor was controversial as Chicago Board of Education President David Vitale previously served as AUSL’s chairman. There are also current investigations going on over Chicago charter school funding. The NCLB seems to have led to corruption in large cities as private companies vie for funding “turnaround” and charter schools.

This is the key mechanism how NCLB attempts to boost academic performance and have schools perform better. However, that has not been the case. The constant and demanding testing has changed the educational environment. Rather than teachers having the flexibility to create their own curriculums and teach according to their students’ needs, they teach to the test. Why? Because their jobs depend on it. It’s based on those tests that a teacher’s performance is judged. The tests are also a very standard way of testing academic performance. It’s a one-size fits all approach that simply does not work. Every child is different, every child is unique. Testing forces children to conform to a particular means to judge their performance…this is not just. Children are unique in their ways of learning and performing in an academic setting. A child may perform excellently in a normal classroom setting, but may just happen to be a bad test taker. Based on that one test, the child is deemed in trouble, or not performing to standards. That is not fair.

On April 7th, Tom Donahue of the Chamber of Commerce and Wade Henderson of the Leadership Conference on Civil and Human Rights penned an op-ed in the Washington Post advocating on NCLB’s behalf. They argued that the core provisions of NCLB should remain in place because the law has made a difference among a diverse group of individuals. According to them, students must be given annual statewide assessments to test what they are learning and there need to be expectations and interventions when schools fall short. They advocate for adjustments to NCLB but do want to keep the testing portion involved. They argue that since NCLB, children of color and from low-income families have made the fastest improvement in achievement in decades.

Earlier in the year, on January 14th, the Washington Post editorial board made similar arguments. They argued that before NCLB, there was no accountability and schools would conceal problems of struggling students. They believe that gutting the testing portion of NCLB would be in poor taste because that would cause a return to the old failed model. According to the Washington Post, the underlying principle of the law is sound: schools need to know whether students are learning and need to do something when they are not; this provision in the law was a civil rights achievement. They also say that the law has worked because the performance of poor and minority students has improved in the past 10-15 years as evidenced by a report by the Education Trust.

Randi Weingarten, president of the American Federation of Teachers, has similar sentiments. She, too, believes that excessive testing has harmed our educational system, rather than benefitting it. Weingarten states in The Atlantic that “schools have become focused on compliance rather than on innovation and achievement. We have become obsessed with hitting test-score targets and sanctioning schools and educators.” In her article, she cites a report by the Economic Policy Institute that found that even though disadvantaged students “made significant progress in the last generation, their progress has actually stalled since NCLB and its test-based accountability were enacted 10 years ago.”

Fourteen years later since its passage NCLB is on its way to being rewritten. This nation has faced further changes, such as the Race to the Top program and the institution of Common Core standards. These programs have come mostly from the White House, under President Obama, and the Department of Education, under Secretary Arne Duncan; however, just recently a bill is on its way through the U.S. Senate.

The Every Child Achieves (ECA) Act of 2015 was written by U.S. Senators Lamar Alexander (R-TN) and Patty Murray (D-WA). It’s a reauthorization of the Elementary and Secondary Education Act and a rewrite of NCLB. ECA still calls for annual testing for the same grades and for the same subjects, but it allows states to determine what weight those tests play. It grants states the power to determine how they hold schools and teachers accountable instead of the federal government (as NCLB does in the status quo). It further grants states autonomy in assessing how teachers are evaluated. With positive reviews, ECA incentivizes excelling schools with increased grants for key programs, such as English and literacy for disadvantaged children and early childhood education.

Overall, the bill significantly reduces the influence of the federal government, and increases the autonomy and flexibility of the states. The federal role could be described as of “guard rails” to ensure equal educational opportunities for disadvantaged students. For the most part, states would begin to take over how they would craft their own educational programs. On April 20th this bill passed committee by a unanimous vote and now heads to the Senate for a full debate and vote.

The ECA is a moderate improvement over NCLB. Unfortunately, it does keep standardized testing in place, but it does reduce the weight and effects testing will have on schools. We can’t expect a complete overhaul of our educational system from Congress in 2015—but this is a start. We need to care about our educational system because the future of our country is at stake. Our children are our future. They inherit our communities, our country, and our world. It is imperative that we do all that we can to develop and empower them while we have the chance. Let’s call on our officials in the U.S. Congress and on our President to support and enact the ECA. But more importantly, let’s call on every public official and candidate in the 2016 election year to build upon the ECA and to ensure the future of our children.

I end this with Diane Ravitch’s closing remarks from her speech to the MLA:

We cannot have a decent democracy unless we begin with the supposition that every human life is of equal value. Our society already has far too much inequality of wealth and income. We should do nothing to stigmatize those who already get the least of society’s advantages. We should bend our efforts to change our society so that each and every one of us has the opportunity to learn, the resources needed to learn, and the chance to have a good and decent life, regardless of one’s test scores.

Diane Ravitch links the reform of education with addressing the basic inequalities and injustices that are in the system. This is the perspective we all need to have as a priority whenever we are talking about “improving our educational system.”