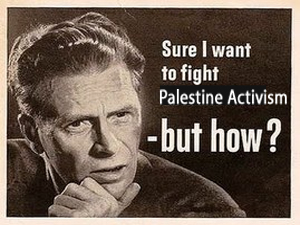 Canary Mission is an anonymously run website that blacklists certain people who are sympathetic to the Palestinian cause.  This includes students who are in Students for Justice in Palestine (SJP) and the Muslim Student Association (MSA); individuals involved in the Boycott Divestment Sanctions (BDS) movement; and individuals associated with Jewish Voice for Peace (JVP) and many more organizations.  The website has a database of these individuals including details such as their occupation, university, and connections with other individuals listed on the website. Canary Mission’s stated goal is to “expose individuals and groups that are anti-Freedom, anti-American and anti-Semitic in order to protect the public and our democratic values.” The “canary” in the name refers to the practice of miners taking canaries into the mine to warn them of deadly gases. The canaries would die first giving miners a warning to leave as soon as possible. But is Canary Mission really warning people of an eminent threat to the American public, or is it using the tactics of McCarthyism to stifle criticism of Israel?

On the Home page, they describe the process for adding people and organizations to the website.

Every individual and organization has been carefully researched and sourced. If you appreciate the work of the Canary Mission, please help us continue by submitting a profile and donating.

Let’s examine how “every individual and organization has been carefully researched and sourced.” As of June 23rd, Canary Mission has 78 individuals in its database. Reviewing a sample of some of the profiles and the accusations made against these individuals reveals the level of “research” that the website accepts. In order to not attract additional unwanted publicity to the people listed, we have decided not to include their names or universities.

One of the blacklisted members is a student who is a member of SJP and the Muslim Student Association (MSA). Below his profile, there are two sections of text talking about SJP and the MSA and some of their connections and activities, but nothing about this student. Why is he on this website? Examining the page a little further, there are two “infamous quotes” from him. In one of the quotes, he claims that he believes both America and Israel are racist. In the other, he states that he would never support organizations that take part in human rights violations. The first quote is merely a political opinion and is not an incitement to violence or “anti-Semitic hate” as the Canary Mission claims. The second is also a political opinion and contains criticism against Israel with no evidence of anti-Semitism.

Another person is also a student who is a member of the Council on American Islamic Relations (CAIR) and involved in the BDS movement. Again, there are a few paragraphs that describe CAIR and BDS in negative terms, but there is nothing listed against this individual. There is no evidence of him supporting anti-Semites or being Anti-American. Canary Mission accuses him of voting for economic divestment from the state of Israel at a university. If anything, that vote represents democracy in action, not “anti-Freedom” forces at work.

Yet another member on the list is guilty for merely describing the Students for Peace and Justice and Peace in Palestine (SPJP) as an organization that is “dedicated to raising money for refugee camps in Palestine.” Canary Mission describes SPJP as having the same “radical” goals that SJP has, but doesn’t say why SJP’s goals are “radical” nor how the goals of the two organizations are even related.

If anything, the three people described here and the 75 additional ones on the blacklist are merely stating their beliefs and strong opinions. It is not against the law to have strong opinions; nor to be critical of Israel. One can complain indefinitely about Congress and criticize the U.S. government for what they see as weaknesses. Yet as long as there is no incitement to hate, everything is protected by our First Amendment rights. This is a hallmark of American democracy, not a sign of “anti-American” hatred.

BDS is a movement that aims to end the Israeli occupation of Palestinian territories by boycotting, divesting from, and applying sanctions to Israel and companies who are complicit in the occupation. BDS is a movement that stands up for human rights and justice for the oppressed Palestinians and does so in a completely legal manner. Canary Mission however does not see it like that. 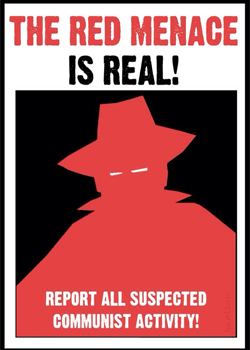 In the section on the BDS movement, the website states “Evidence suggest that the movement is directly connected to the Muslim Brotherhood and the terrorist organization Hamas.” Some of this “evidence” is the claim that once in 2013, Fadwa Barghouti made a speech at a BDS conference. Fadwa Barghouti is the wife of Marwan Barghouti, a Palestinian Fatah leader who is currently in an Israeli prison on terrorism charges. This type of accusation holds no substance as it tries to link “terrorism” and “supporting Hamas” with the speech of a spouse of an individual convicted in an Israeli military court of terrorism. The BDS movement is not responsible for nor is it representing the actions of the speaker’s relative. Another speaker at that event was Desmond Tutu. Does this mean that the BDS movement is an offshoot of the Southern African Anglican Church? President Barack Obama has praised Desmond Tutu on many occasions. President Obama also has ties with Prime Minister Netanyahu of Israel. Make way blacklist, we have a new potential candidate. Mr. Netanyahu, another supporter of Hamas. This sounds ridiculous, farfetched, and untrue. Yet it is exactly this type of connection that Canary Mission is trying to form when it accuses people.

If any reader is accusing me at this point of exaggerating, they should know that Canary Mission does exactly what I just did. Examine the following passage from the website’s description of SJP,

SJP is supported by American Muslims for Palestine (AMP), an organization that has a number of board members who are former employees of the Holy Land Foundation (HLF), a group convicted of funneling funds to the terrorist organization Hamas.

Canary Mission is continuing their tactic of the chain of associations now for organizations. SJP as an organization is supported by AMP. If one explores the links that Canary Mission gives, they are redirected to another website The Investigative Project on Terrorism run by Steve Emerson. Steve Emerson was called one of the five most important Islamophobe “experts” in a report from the Center for American Progress (CAP) entitled “Fear, Inc.: The Roots of the Islamophobia Network in America. The report states

Five “experts” are primarily responsible for the dissemination of false facts and materials used by political leaders, grassroots groups and the media to generate unreasonable fears about Muslims and Islam. Since the 9/11 attacks in 2001, seven foundations have provided over $42 million in support for this focused campaign.

Canary Mission is relying heavily on this Islamophobe website in an attempt to smear these organizations. According to that website, AMP had two board members who were connected to the Holy Land Foundation. The Holy Land Foundation (HLF) was shut down in 2008 after a case claimed the foundation gave support to Hamas. The Holy Land Foundation was founded to provide a way for American Muslims to give charity to Muslim communities around the world. In fact the jury in the first HLF case in 2007 did not see anything wrong with the organization itself. Only in the second trial did an anonymous expert report that Hamas controlled the charity organizations that the HLF donated to in Gaza. Yet again we see accusations based on connection. Nothing solid. Nothing verified.

For a website whose important mission is to “to protect the public and our democratic values,” it does not list any staff or supporting organizations who are part of this effort. In an article by Josh Nathan-Kazis at Forward, he describes Canary Mission’s determination to keep themselves secret and all the organizations who might be involved denying any involvement in the site.

The Web domain is registered in a way that hides its ownership. Though the site says that Canary Mission “is a non-profit organization,” no group called Canary Mission is currently registered with the IRS as eligible to receive tax-deductible contributions, and the website indicates no fiscal sponsor through which it can accept donations.

A handful of right-wing pro-Israel groups that focus on campuses said they had no relationship with Canary Mission, including the David Horowitz Freedom Center, Pipes’s Middle East Forum, the AMCHA Initiative and StandWithUs.

In Turkish, we say that when an entity is trying to discredit another, they throw mud. In other words they make whatever accusation against the other hoping that these accusations stick. Just as mud itself leaves a mark on whomever it is thrown at, these accusations will make a mark on whomever they are levied. The students, organization members, and everyone else listed on that website are all in danger of being identified by their “crimes” and possibly being denied a future job interview, or worse being personally targeted and attacked. They are forced to endure this negative publicity by an organization whose background and motives are unclear. Their “crimes” of anti-Americanism are nothing more than connections to organizations that have connections to others that have connections to Hamas. Yet even those connections themselves are largely unsubstantiated.

They encourage submissions to their website in this way

Please help Canary Mission with our cause.  If you have a SOURCED profile of someone involved in anti Semitic and/or anti Israel activities please submit their details and we will verify, to the best of our ability, your submission and then publish a page on the person whom you have submitted.

We know that the website’s idea of a “Sourced” profile is deceptive so it is difficult to have any faith in their verification process. Readers of the website can also submit any blog they want about any individual, event, or organization without it even going through a verification process. Another attempt to encourage further unwarranted defamation of individuals and organizations.

At this point it seems that Canary Mission is nothing more than a cheap scare tactic that has an ulterior motive. Like during the days of McCarthyism when people were considered true Americans for claiming someone they didn’t like was a Communist, Canary Mission is declaring that Palestine activists are anti-American anti-Semites who should be identified and blacklisted by true Americans. Whether for political, religious, or other nefarious gains, the website’s founders are attempting to drive a wedge within our diverse society. By casting doubt on “the other”, they are trying to revive a new age of McCarthyism, fear, and hate. Are we surprised anymore when we turn on the news and hear of hate crime murders, assaults, and discrimination? What our country needs is not more suspicion, hatred, and fear of the “other”, it is understanding. It is to understand differences of opinion through debates, not blacklists.

Do You Know Where Your Ramadan Dates Come From?