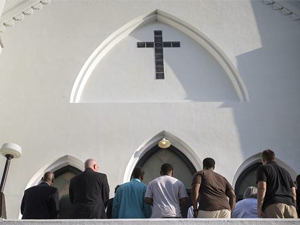 It is the evening of Tuesday, June 17, 2025 and the humidity in Charleston, South Carolina has settled and a cool breeze is moving across the city. The atmosphere is somber and many Charlestonians are reflecting on the events of that very date ten years earlier. A white supremacist had killed nine black worshippers at the Emanuel AME Church. Each anniversary, the city had gathered to remember the events of June 17, 2015, but this anniversary was special. Stepping up to address the quiet and contemplative crowd, the Reverend welcomed them, began with a quote from the Gospel, and turned the focus of the speech to how much had changed over the past decade, noting…

…that the new policies in place have positively impacted our communities? That guns are no longer in the hands of those that can do such great harm? That we have moved past recognizing black history to engaging with it, teaching it, connecting it to present-day issues, and building institutions to help the black community heal? That our primary source of education is no longer sensationalized media coverage of events, but rather properly detailed and socially conscious explanations of the development of American history and the black community’s place in it?

Or will the Reverend note that our schools and neighborhoods remain segregated? That our prison system continues to grow and be full of black Americans? That white privilege and even white supremacy are stronger than ever before? In short, will the Reverend have to once again note that little has changed in the Land of the Free and Home of the Brave? That we only have liberty and justice for some?

Following the death of Freddie Gray and the protests in Baltimore, Karen Attiah wrote a piece on how Western media would have covered the events if they had occurred in another non-Western country. After the events in Charleston, such an article would be much broader in scope, detailing the continuous struggle of blacks in the country as a targeted minority. It would outline police brutality; the consistent killing of blacks; the ongoing housing, resource, schooling, and occupational segregation; the rise of white supremacist groups and terror attacks; the high incarceration rates of blacks; the recent rise in focus on national consciousness of these issues; and the attitude of some segments of the white population that refuse to assume any responsibility for a long history of attacks on this population treated as second-class. It would likely conclude with some discussion about how black mistreatment has left the country divided and presents the attitudes of the majority towards minority groups in the country.

That is quite a track record and it does not even include discussion about the six arson cases on black churches in the south that have occurred in the immediate aftermath of the Charleston shooting. The hypothetical article outlined above has some very practical importance for Americans today: it tells us a lot about our country. No matter how hard we try to believe that this country has liberty and justice for all, it forces us to understand that it never has and, at this rate, never will. At the end of the day, the outsider only sees deep racial divides in the country that have left one group far more disadvantaged than another. Sensationalized media has only reaffirmed our biases regarding the black struggle in the United States and will only continue to do so until we begin learning in the classroom and in books instead of on television. In short, the takeaway from the article is that the culture of hate and xenophobia (in its many forms) is one that must be eliminated entirely before true equality, liberty, and justice can be achieved. New laws and policies can certainly help, but the deeper issue is one of mentalities towards the black community (and other communities) that can only be changed through education and engagement.

It is hard to have any optimism for the future given this track record. If there is indeed a silver lining, it is the fact that the country is finally, finally talking about the black struggle that has continued in different forms since the seventeenth century. The entire nation is buzzing about hate and love, white privilege, supremacy, extremism, the use of the word “terrorism” in the media, guns and gun control, and the Confederate flag. The divide on these topics remains deep. Only through prolonged focus on the core issues, education, and engagement can we begin to resolve long-standing issues and allow black Americans to heal. I fear that the Reverend’s speech on the tenth anniversary of the attack in Charleston will be one that will witness the bowing of heads in recognition that nothing has changed. But I must hope that it is one that will witness the nodding of heads that shows the great change that has occurred in loving memory of the Charleston Nine and the many others that have left us in the great struggle for justice in America.

Opinion: Baltimore is Not Burning, America Is

Opinion: Baltimore is Not Burning, America Is