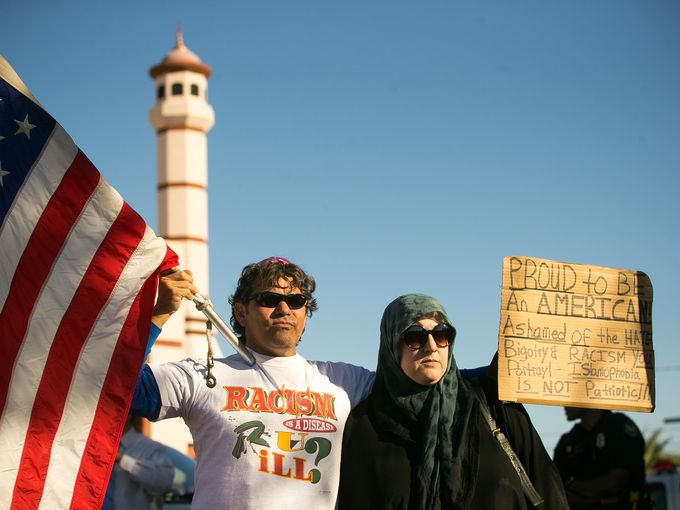 Facebook
Twitter
Pinterest
WhatsApp
Email
Print
An organized protest broke out in front of an Islamic Community Center in Phoenix, Arizona on May 29 with protesters donning shirts that said “F*CK ISLAM!” and spewing violent slurs against Muslims during an afternoon Friday prayer service. Islamophobes dressed as “bikers” rallied with roughly 250 people and also held a drawing contest of the Prophet Mohammad. The head organizer, Jon Ritzheimer, called it a “Freedom of Speech Rally,” and continuously claimed he is simply exercising his first amendment rights to freedom of speech and the right to peacefully assemble. He also utilized the second amendment right to bear arms as he encouraged the protesters to bring weapons to the rally in case a terrorist should show up. While Ritzheimer clearly is very well versed in our nation’s Bill of Rights, he seemed to overlook our right to freedom of religion.

The Islamic Community Center in Phoenix was the site for this rally after two men tried to open fire at an event showcasing drawings of the Prophet Mohammad in Texas last month. The two men, Elton Simpson and Nadir Soofi, were shot by police. They both had attended services at the mosque in Phoenix.

Online there were trends on Twitter that overwhelmingly condemned Jon Ritzheimer, and his self- proclamation of patriotism by promoting violence against Islam nationwide. The hashtag #NotMyAmerica and of #JonRitzheimer were trending for hours in support of the Muslim community by people of all faiths and walks of life. Some of the tweets read:

This is so true… #NotMyAmerica 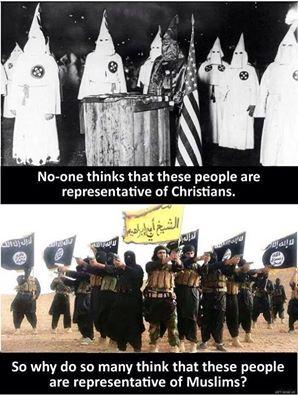 I’m not Muslim but I support the right to practice faith without fear of violence and intimidation. Racism & oppression are #NotMyAmerica

Not only is this #NotMyAmerica – its a Klan-esque manifestation of bigotry, ignorance and is a disgrace.

The support against the rally continued as Jon Ritzheimer attempted to raise $10M through GoFundMe in an effort to “protect his family.” He was denied within hours of the request and has posted several times on his Facebook page about how “hackers are ruining my life.” Apparently Ritzheimer did not consider that exercising the first amendment right to freedom of speech does not stop haters from hating. In the video he states that “this whole thing blew up in my face and I was ill prepared.” He goes on to point the finger to the media, saying that “the media is the reason for all of this, they have taken it and they have twisted it and put out lies, it’s ridiculous”. Twisted it and lied? That sounds a lot like what Jon Ritzheimer did himself, with his portrayal and disrespect of Islam, a religion that is practiced by over 3 billion people all around the world. He further goes on to say that he will be moving forward with campaigns to defend himself and his civil rights as an American citizen and that “no one in this country should feel targeted like this.” Despite the obviously hypocritical claims Ritzheimer continues to make, the media and the internet surprisingly portray solidarity for the Muslim community. 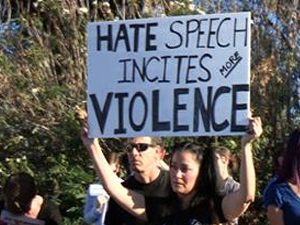 The president of the Islamic Community Center Usama Shami says that they have received countless hate letters. One specific letter was published online in its entirety; Shami reports that “the rambling full-page letter quotes the Bible and makes a number of threats to kill the imams and their families if they do not “repent and turn to Christ,  from the “countless demons of Islam”. Ritzheimer has said that “true Islam is terrorism,” and explained the intentions of terrorist organizations by saying that “it’s not that these people are out perverting this religion, these guys are following the book as its written”. The problem with this is that the billions of practicing Muslims who oppose terrorism do not fit in his explanation.

Reza Aslan, a religious scholar and author of No God but God: The Origins, Evolution, and Future of Islam  explains that “part of the problem is that there’s this misconception that people derive their values from the scriptures,” and he further explains “the truth is that it’s more often the case that people insert their values into their scriptures.” Simply meaning that “if you are a violent bigot and misogynist, you will find plenty in the Qur’an and the Bible to justify your viewpoint, and if you are a peaceful feminist you will find just as much in those scriptures to justify your viewpoint.”

Aslan’s point is displayed when those who fall outside of this spectrum of interfaith violence have reached solidarity from the protests, leaving a beam of hope for a peaceful coexistence of faith. Usama Shami, the president of the Islamic Community Center of Phoenix, told Al Jazeera News

The same night the protests happened, a church down the street organized a counterprotest and the number of counterprotesters they got was higher than the anti-Muslim ones.

A rally called “Love is Stronger than Hate” took place the Monday following the anti-Islam protest, with people carrying flowers and showing the unity in the community that prevails against violence and hate. Shami described it as “an event where various interfaith groups came to the mosque, about 900 people, some of them with flowers. A lot of people realize they need to speak against hate … there is a positive side to this.”  Imam Mahmoud Sulaiman thanked the group by saying “You made goodness victorious”.

An anti- Muslim protester named Jason Leger was invited into the mosque and was astounded by the warm welcome by the worshippers and the Imam. Leger said

It was something I’ve never seen before. I took my shoes off. I kneeled. I saw a bunch of peaceful people. We all got along. They made me feel welcome, you know. I just think everybody’s points are getting misconstrued, saying things out of emotion, saying things they don’t believe.

Another anti- Islam protestor who also was wearing a shirt that demonizes Islam, Paul Griffin, joined him and then said that he will not be wearing the shirt ever again. He also explained that most of the protesters have never even met a real live Muslim before.

Since the rally on May 29th, communities of Muslims in the South have spoken out and have become more recognized. Groups such as the United Muslim Motorcyclist Association and the Society of Islamic Rednecks have surfaced on social media in support of the Muslim community indigenous to the South. To counter the offensive F*ck Islam T- Shirts, the Society of Islamic Rednecks have created a shirt that says “Found Islam.” Their group has over 1,000 likes on Facebook.

The ‘War on Terror’ has created a culture in our society to continuously credit acts of violence in the name of religion, but neglect to highlight acts of peace, compassion and solidarity in the name of religion. Usama Shami extended his hand and exposed anti- Islam protesters to the true core values of Islam, and in the end they witnessed unity and peace and forgiveness. This time, salaam – peace –  prevails!