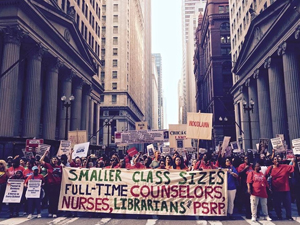 On Tuesday, about four thousand Chicago teachers, parents, and their supporters rallied at the Thompson Center and marched down LaSalle Street to the Chicago Board of Trade. They demanded not only a fair contract for the Chicago Teachers Union (CTU), but also for the just treatment of all communities in the city. Given the hostility of the city in contract negotiations and an anti-union governor who is continuing to push education and social services cuts, as one chant had it – “This is war!” 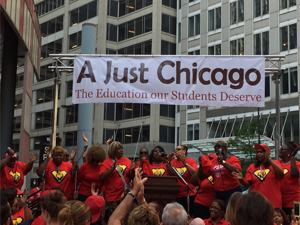 The theme of the march was –

The CTU is currently bargaining with the city to renew the existing contract that expires June 30. Key CTU demands include smaller class sizes, school libraries and art classes, and in-school counselors. In the meantime, the Board of Education is pressing its message that the city simply doesn’t have the money and they are looking for pay and benefit cuts as the only solution to a major fiscal crisis. In a Tuesday statement on the contract negotiations, the CTU said

The Board has rejected the bulk of CTU proposals—including those with no additional costs to the district—and countered with rescinding a 7 percent pension pickup and renegotiating health care premiums and co-pays with demands that would likely consume 3 percent of teacher and education support personnel salaries.

Other CTU demands during the contract negotiations include a librarian and a nurse in every school; limits on standardized testing; enforced class size limits; and racial justice for students by way of restorative justice coordinators and more resources for vulnerable communities. The CTU is also looking for a full moratorium on school closings, turnarounds and reconstitutions. The union has also provided a briefing document on the contract issues and their status. One of the more creative requests is “for CPS to engage in joint lobbying in Springfield for an elected school board and responsible revenue sources that fairly tax the biggest profit takers in Illinois.”

Speakers at the Thompson Center rally also emphasized the need for the wealthy to pay their fair share of taxes. Former CTU President Karen Lewis said

We have a governor who has his own ideas about cutting funding. Who are the set of people who can solve this problem? Those people who need to pay their fair share.

We need to have a system of viable public schools and will not have safe neighborhoods until we do. It’s more critical now than ever before.

He continued by emphasizing the unfairness of both how city services are managed and the small number of people making these important decisions for Chicago’s communities.

How we treat the most vulnerable citizens of our city and of the state is important. All voices must be at the table to make these decisions and everyone paying their fair share will be needed.

Arriving at the Chicago Board of Trade, speakers emphasized how money that should have been invested in public schools had been redirected and squandered on programs benefiting the few.  Rhoda Rae Gutierrez, a Chicago parent part of Raise Your Hand for Illinois Public Education, put it this way

These people are public money gamblers, siphoning money from our schools. They have an addition problem. They are addicted to gambling with our money…they have an addiction to privatization…It’s made them close our mental health clinics and 50 public schools…we need an intervention!

Multiple speakers, including Chicago teacher Tara Stamps who ran for 37th Ward alderwoman in the last election, stressed the theme of the city going after the teacher’s union and trying to cut benefits and pensions was just the first step to target other unions. ‘Who do you think they are coming for next? This is a public employees fight!”

Early in May, the CTU filed an unfair labor practice complaint against the school board accusing them of bargaining in bad-faith and refusing to engage in mediation toward a new contract. Today will be the first day since the rally and march, that CPS and the CTU will resume negotiations. Given the current major conflicts, this will be a long summer for all sides of these contract talks.