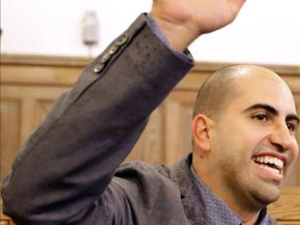 On Friday, June 12, a Champaign County court has ordered the University of Illinois at Urbana-Champaign to release thousands of emails in relation to the firing of Steven Salaita last August. The decision is considered a major victory by Salaita’s supporters, who brought the lawsuit to the university under the Illinois Freedom of Information Act (FOIA).

On Saturday, June 13, a day after the court made its decision, the American Association of University Professors (AAUP) voted at their annual meeting in Washington D.C. to censure UIUC regarding the administration’s rejection of Salaita hiring, citing a violation of academic freedom.

Censure by the leading academic organization is considered relatively rare and can damage a university’s reputation in academia. Chancellor Wise acknowledged the censure will have repercussions, the Guardian reported. AAUP’s Committee on Academic Freedom and Tenure report finds UIUC administration and board of trustees violated principles of academic freedom and Salaita’s due process rights. The report calls upon UIUC to admit their wrong and reinstate Salaita.

In a separate federal lawsuit, Salaita is suing the university’s board of trustees, administration and donors for violating his constitutional rights and breaching his employment contract by rescinding his job offer due to statements he made on Twitter during Israel’s military campaign on the Gaza Strip last summer.

The university initially denied Salaita’s FOIA request, citing the statute’s “unduly burdensome or voluminous” clause as a reason for denial. The court ruled against UIUC, stating the emails are a matter of public interest.

Federal Judge Thomas Difanis cited the university’s previous scandal—the ‘clout list’ which granted affirmative action to applicants connected to wealthy and influential members of UIUC’s community—as an example of the information Salaita was seeking in public interest. The emails to be released will make some 9,000 emails of correspondence between university administration and trustees relating to Salaita’s firing public, the Electronic Intifada reported.

In a statement made online, Steven Salaita refers to the FOIA lawsuit ruling as providing, at the very least, “a much better documentary record of the [tenure] process and its participants.”

Supporters believe these emails will further indicate the university’s decision to rescind Salaita’s job offer was profoundly influenced by pro-Israel donors, the Electronic Intifada reported. This evidence would strongly support Salaita’s case in his federal lawsuit against UIUC.

Emails released earlier this year revealed UIUC administration may have mislead investigators and the public regarding the circumstances of Salaita’s rescinded job offer.

In an email between Chancellor Phyllis Wise and an undisclosed recipient, Wise defended Salaita’s expressions as protected free speech rights. Later, after meeting with the university’s trustees, the administration formally rescinded Salaita’s offer on the grounds of lacking basic “civility”.

After the hearing, she commented, “We continue to maintain it’s an unduly burdensome request,” reported The News-Gazette.

A version of this article was previously published in Palestine in America.

On Tuesday, June 30th, Steven Salaita announced his acceptance as the new Edward W. Said Chair of American Studies at American University of Beirut for the 2015-16 academic year. The position will begin Fall 2015 for a one year term. The new appointment is not expected to interfere with the ongoing federal lawsuit brought against UIUC and their board of trustees by Salaita. According to The News-Gazette, the university has already spent over $843,000 on legal costs. University spokesman Tom Hardy has stated that a portion of the costs were paid for by public funds.

Anita Alvarez Wants to Withdraw From Laquan McDonald Murder Case But Is It Enough?

Op-Ed: Myth of Monolithic Jewish Support for the Israeli State