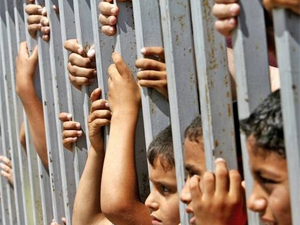 As reported last week, a Congressional Briefing on the issue of Palestinian children in Israeli military detention was held on June 2. Some 130 people, including staffers from at least 23 Congresspeople and 10 Senators, were briefed by human rights experts and heard testimonies from Palestinian children who have been through the ordeal of a military arrest, detention, trial and imprisonment.

Organized primarily by the American Friends Service Committee (AFSC), the briefing brought to light the issue of the nearly 700 Palestinian children living in the West Bank who are thrown into the Israeli military detention system every year.

Representative Keith Ellison (D. Minn) gave the opening remarks in which he made the point that caring about children is something we should be doing every day and that “ the occupation is harmful to both Israeli and Palestinian children.”

“Israel is the only nation in the world that automatically and systematically prosecutes children in military courts,” said Bradley Parker, human rights lawyer, with Defense for Children International Palestine, an organization that provides legal services and monitors the treatment of children in detention.

Speaking to the hushed audience, Parker pointed out that an Israeli settler living in the West Bank, is technically subject to the same military laws as a Palestinian, but in practice, is given the benefit of civilian law.

The problem is more widespread than the initial figures indicate.  In addition to the 700 children arrested and detained annually, there are an additional 300-400 children every year who are detained and released the same day, and do not get recorded, Parker noted.

“These courts are not about justice.  You don’t arrest kids in the middle of the night from their home, physically abuse 3 out of 4 children if you’re interested in justice”, Parker said.

Palestinian American teenager Tariq Abu Khdeir also testified about the ordeal that he endured while visiting family in East Jerusalem last summer. Video taken by a bystander showed Tariq being brutally beaten by Israeli police while he was observing a protest over the murder of his cousin Muhammed Abu Khdeir at the hands of three Israelis.

“I was treated like an animal,” Tariq related.  And though the visible scars have healed, “I feel like I can’t be normal.” He said. Thus far, the officers who beat and arrested Tariq have not been charged, or even investigated.  “I know that for me to be able to put this behind me, these soldiers have to be held accountable.”

The briefing also included clips from the new video “Detaining Dreams” that includes testimonies from four children who have been through the Israeli Military Court System.  (“Detaining Dreams” is not yet released, but will have a premier in the near future.) The children related how they were arrested in the middle of the night, taken away to an undisclosed location and physically and emotionally abused during a long and cruel interrogation, all without a lawyer present.

Videos of the briefing can be found here.

In follow up to the briefing, Representative Betty McCollum (D, Minn) has drafted a Dear Colleague letter
asking her fellow legislators to sign on to a letter to Secretary of State Kerry urging him to raise this issue with Israeli officials. The deadline for signing the letter is June 18.

The Congressional Briefing was part of the No Way to Treat a Child Campaign that started after many members of the Chicago Faith Coalition on Middle East Policy went on delegations to the West Bank and saw how widespread the detention of minors and incidents of night raids were on communities.

In addition to encouraging legislators to sign Rep. Betty McCollum’s Dear Colleague letter, the campaign will continue to meet with members of Congress over the summer, hoping to influence some to visit and see for themselves military courts in the West Bank. The hope is to see high level officials raising this issue with the State of Israel so there will be a change in detention patterns of Palestinian youth. Campaign members will also continue to raise awareness in local communities around the U.S. with the video of “Detaining Dreams” and a photo exhibit called “Night Raid” that interested groups can host in their community to further the discussion about Israeli military detention and ill treatment of Palestinian children.

Lynn Pollack is a member of the Chicago Faith Coalition on Middle East Policy.

The Systematic Mistreatment of Palestinian Children