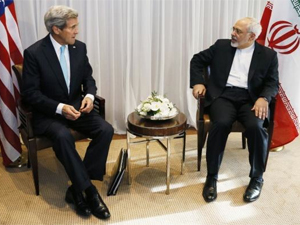 Thirty-four years ago in Iran, the longstanding monarchy was overthrown and the Islamic Republic of Iran was established. It marked a new period of discord with Western Powers, discord that for the past decade has often boiled down to one contentious issue.

That issue, of course, is nuclear energy. From day one, Iran has insisted that their nuclear developments are only intended for energy purposes. According to them, Iran has as much of a right as any other country to pursue nuclear energy, and should be left alone to do so. Western powers are inclined to disagree. The United States has resisted Iran’s nuclear power program ever since the Shah was overthrown. Indications that Iran was covertly breaching the Treaty on the Non-Proliferation of Nuclear Weapons only heightened tensions. For the West, the worst-case scenario sees Iran using their nuclear resources to develop atomic weapons, instigating a nuclear arms race across the already unstable Middle East.

Western Powers are extremely invested in preventing that outcome. By implementing heavy sanctions against Iranian imports and exports, those powers have succeeded in weakening Iran’s economy. As a result, no one is satisfied, and Iran, the U.S., and six other world powers have spent the last few years locked in heated debate. The Iranian side of the table wants to see sanctions lifted and gain the freedom to operate their nuclear power plants as they see fit. The world powers want to restrict Iran’s nuclear program as much as possible, or at least enough to ensure that they can’t create nuclear weapons. 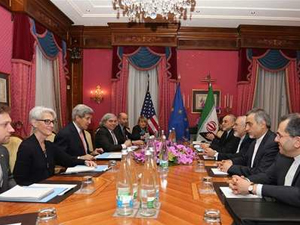 Digging deeper, the conflict is a multi-layered heap of contention, as diplomacy often is. While the talks are riddled with hurdles, there are a few in particular that are proving difficult to resolve. First, there is dissent on when and how sanctions would be lifted should a deal be reached. Iran is in favor of lifting all of them immediately upon agreement, while the Western powers want a gradual reduction contingent on Iranian cooperation. Secondly, they need to reach an accord regarding Iran’s current and future nuclear development. Iran believes the country is entitled to research and develop nuclear power like any other. The West wants to ensure that should Iran choose to develop a nuclear bomb, it would take them at least a year to do so, the so-called “break-out” time.  Finally, there is the matter of how a hypothetical deal would be enforced, with the West insisting on heavy monitoring of Iranian facilities and Iran resisting.

Thus far, negotiations have been relatively unfruitful. Obama made history in September of 2013 by making direct communication with the president of Iran for the first time since the 1979 revolution. A few months later a deal was struck, sanctions would be lowered while Iran froze its nuclear development. The deal was only temporary, granting negotiators a little breathing room as they sought a longer-term solution. The deadline for that final solution, however, has now come and gone a few times. First it was July, which turned into November, and then became June.  So far every meeting has resulted in a failure to come to an agreement, yet the diplomats push on.

Their endurance was rewarded in part last April. Representatives from both sides approved a rough outline of how they were going to move forward. The hypothetical next steps entail the shut down of roughly half the centrifuges currently spinning uranium in Natanz, along with monitored changes of plants in Fordo and Arak. Fordo, a potentially bomb-impervious site, would become more research oriented, while Arak would limit its substantial nuclear production rates. The other half of the deal would see the Western Powers gradually end their sanctions.

Time is rapidly running out once again, however. June 30th is just around the corner, and countries on both sides of the dispute wait anxiously.  Diplomats involved with the discussions insist that crucial progress has been made, but many others are less optimistic. Even with the outline set up in April, there are still a lot of messy details to be hammered out. The contentious issues must each be resolved, and recent history is not on diplomacy’s side. Neither side is willing to grant the other the benefit of the doubt, with the legacy of mistrust between the U.S. and Iran doing nothing to help move the process along. However, this time the U.S. is adamant that a deal will be reached. In fact they have stated that should an agreement not be completed, the country will walk away from the negotiating table.

An end in negotiations would likely satisfy Israel, who has expressed vehement opposition against any negotiations from the beginning. As the likely target of any potential nuclear weapons that Iran would develop, Israel is a strong proponent of aggressive, proactive action. Saudi Arabia is also less than enthusiastic about the discussions, which they view as being too cooperative with Iran, their biggest rival in the region. Finally, members of Congress who have voiced support for heightened sanctions over a potential deal would likely watch discussions end with a great sense of satisfaction.

However, that ends the list of people who would be pleased. If the next few weeks don’t result in some form of deal, the Western powers will be forced to turn to alternatives. For the U.S., those alternatives will likely result in heavier sanctions. Iran would be left frustrated, and relatively free to pursue any form of nuclear development. Obviously, that is less than ideal for the rest of the Middle East, beyond Israel who already has nuclear weapons, to begin developing their own nuclear programs for protection. There would be pressure on the U.S. to make the first move by beginning to bomb known nuclear sites in Iran or give the green light to Israel to bomb the sites themselves. From Israel and Saudi Arabia’s point of view, that would be the best option for preventing Iran from attacking them. However, should the U.S. ever reach that point, it is hopefully not a decision taken lightly, as it would inevitably be the match that lights a fuse on a long and devastating war.

It seems clear that a breakthrough in the Iran nuclear talks by the end of this month would be a huge success for diplomacy. Nevertheless Congress is insistent that no potential deal will be put into action without their approval. On Tuesday, the rarely combined efforts of both parties proved enough to overrun President Obama, and he agreed to sign a bill that dictates that Congress will have the ability to veto any movements to remove sanctions. If a deal is struck with Iran, there will be a mandatory 30-day period in which sanctions cannot be lifted while Congress reviews records of the transactions. The bill passed unanimously, demonstrating rare Congressional unity in demanding a say in sensitive foreign policy negotiations.  Although Obama was resistant to approve another potential impediment to an agreement with Iran, modified language in the bill and the united effort of Democrats and Republicans were enough to convince him. The President is likely consoled by the fact that according to the new bill should he chose to veto Congress’ decision, it would take a mere 34 senatorial votes to sustain it.

While still less than ideal for the White House, it is greatly preferable to another amendment written by Senators Mark Kirk (R – IL) and Bob Menendez (D – NJ) in January. Their amendment stated that the U.S. would extend sanctions on Iran after the June 30th talk deadline if a deal was not made. The implications of that amendment did nothing to recommend the U.S. to Iran at a time when we’re determinedly trying to continue the diplomatic effort. In the end, the Senators agreed to support the aforementioned Congressional review bill and hold off on talk of extending sanctions until after the deadline, but it’s possible the damage was already done.

Another factor making the ongoing talks even more convoluted is the case of Jason Rezaian. Rezaian, a dual citizen of America and Iran, worked as a reporter for the Washington Post. A little under a year ago he was arrested under suspect conditions and placed in an Iranian prison. His case has spiked outrage for many in the U.S. who feel he was unjustly prosecuted. The charges against Rezaian, including “collaborating with hostile governments,” “propaganda against the establishment,” and espionage, were originally not made public. That secrecy has been an ongoing theme, as Rezaian has frequently been kept in isolation with limited visitation rights. Furthermore the trials, which began early this month, are off limits to the public.

Many speculate that the trial has more to do with the ongoing nuclear debates than any real crime by Rezaian. Whether Rezaian’s imprisonment is intended to provide leverage to Iran, impede a compromise with the Western Powers, or some ulterior motive cannot be certain. Nevertheless, the cases of Jason Rezaian and the two other Americans who are currently imprisoned in Iran are certainly on the diplomats’ radar.

Also on their radar is the knowledge that the closed-door negotiations may not be as private as they thought. A few months ago, U.S. officials made known their suspicions that Israel had been spying on the nuclear talks. This was not particularly shocking for the U.S., and was in fact discovered by spying on Israel. However, Israel’s use of the information they uncovered to interfere with the talks was more upsetting. The recent news that a security firm, Kaspersky Lab, detected a virus in three hotels where talks had taken place brought the matter back up again. Although no official accusations have been made, heavy hinting implies the virus was traced to Israel.

Will the Iran nuclear talks meet the June 30th deadline?

There are no shortage of obstacles impeding the path to a compromise in nuclear talks between Iran and Western Powers. My optimistic assessment is that the determination to finally come to an agreement, as well as recent steps forward, will lead to a successful understanding by the end of this month. My realistic assessment is that these are the same arguments and arguers who have been pushing the deadline back for over a year; a sudden breakthrough would be a bit of a departure from tradition, although a welcome one at that. While I don’t think June 30th will bring a miraculous resolution that appeases both sides, I am realistically optimistic that enough progress will be made that a compromise is not off the table.