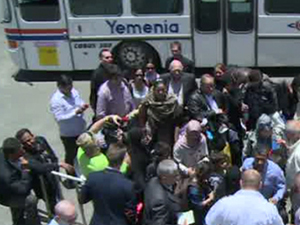 Facebook
Twitter
Pinterest
WhatsApp
Email
Print
In April, the Chicago Monitor’s Bill Chambers published two articles regarding the crisis in Yemen. After interviewing Yemeni Americans and researching the U.S. relationship to the situation, Chambers came to the conclusion that the U.S. government was doing close to nothing to aid its citizens who strongly desired to evacuate from Yemen. As a result of this lack of support, thousands of U.S. citizens have been stuck in war-torn Yemen. What has transpired in Yemen since Chambers’ April articles?

Some U.S. citizens have been fortunate enough to evacuate Yemen. While this is certainly good news, at least on the surface, it is believed that many still remain in Yemen. This unfortunate situation is a direct result of the conflict between the Houthi rebels and a coalition that seeks to stop them.

On March 25, 2015 a Saudi-led coalition began what they dubbed “Operation Decisive Storm”. This campaign carried out airstrikes on Yemen as part of its military intervention in the country. The coalition of nine Arab states banded together, with the support of Yemen’s current presidential figure Abd-Rabbuh Mansour Hadi, in an attempt to quell the Houthi threat that has continually challenged Hadi’s authority. The United States has provided the coalition with intelligence and logistical support.

Since February, The U.S. government, in spite of its support of the Saudi-led coalition in the region, has continually refused to coordinate an evacuation effort to get U.S. citizens out of Yemen. Despite both the coalition’s ending of “Operation Decisive Storm” and its initiation of “Operation Renewal of Hope” on April 21, 2015, U.S. citizens have had little to no hope of evacuating the region comfortably. Considering the recent efforts to rescue four Americans held hostage by Houthi rebels, the U.S. government’s refusal to coordinate any kind of evacuation of its citizens is inexcusable when other countries have already done so two months ago.

Following almost a month of airstrikes with “Operation Decisive Storm,” the coalition decided that it was time to switch gears. With “Operation Renewal of Hope” in action, the Saudi-led coalition pledged to do more than drop bombs on Yemen.  This is because the coalition had apparently been less than particular with their earlier bombings, leading to the deaths of numerous civilians. But, in addition to continuing airstrikes, General Ahmed Asiri of Saudi Arabia says that this new campaign seeks to aid in evacuating citizens, help with humanitarian efforts, and secure the security of civilians.

Helping U.S. citizens evacuate Yemen should have been, and should still be, one of the U.S. government’s main objectives in Yemen. Unfortunately, the government has mostly chosen to only provide its citizens with information, not assistance. The U.S. State Department’s Travel Warning website, which has not been updated since April 3, provides U.S. citizens with information on how to best evacuate. Yet, these suggestions only illustrate how difficult the evacuation process is without governmental support:

As seen in Chambers’ earlier articles, this is the exact predicament that many Yemenis, who happen to also be U.S. citizens, have encountered. Many countries, such as India, China, and Turkey, have helped evacuate their citizens from Yemen. Even the nearby government of Somalia launched a rescue for its own citizens. The U.S. government, on the other hand, has not changed its stance and refuses to intervene in this way.

To supplement the information given on the Travel Warning website, the U.S. State Department’s webpage about the crisis in Yemen gives more up-to-date information regarding the different ways to evacuate the country. Like the Chicago Yemenis who had to board Indian ships in order to leave Yemen, many other U.S. citizens have found refuge in Djibouti. The webpage acknowledges the current overcrowded hotels, hostels, and refugee camps of Djibouti. Additionally, the webpage states that, due the large influx of refugees, the U.S. Embassy in Djibouti cannot “guarantee or secure hotel rooms or other lodgings.” What is the situation like in Djibouti?

Living in Djibouti has been difficult for U.S. citizens, who have no choice but to pay thousands of dollars just to survive. Jerome McDonnell of Chicago’s WBEZ 91.5 discusses the effects of the crisis in Yemen in an interview with Wafa Yafai, a Yemeni American from Chicago. Yafai shares her personal connections and comments on the conflict with McDonnell. Yafai’s aunt and her two daughters, ages 15 and 7 (both U.S. citizens) were able to escape Yemen on a ship headed for Djibouti. Yafai describes how living and housing expenses in Djibouti have skyrocketed. This increase in prices has squeezed large amounts of money out of U.S. citizens forced to reside in the country until they’re allowed to vacate. She said that housing is around $100 a day while a meal—a meager one at that—is of comparable price. While the U.S. Embassy is helping people secure visas, they can only give out a certain amount of visas at one time. At this point, U.S. citizens are sitting around waiting to return to their homes in the United States.

Djibouti has not been the only destination for evacuees. Many migrants have traveled from the port of Aden in Yemen to the port of Berbera on the Eastern Coast of Somaliland. One-third of all evacuees have found refuge in Somaliland and Puntland – a Somalian territory that lies on Somaliland’s Eastern border. In addition to Djibouti and Somaliland, the International Organization of Migration (IOM) states that people have found refuge in Ethiopia, Puntland, and Sudan.

On top of scattering people along the Horn of Africa, the crisis in Yemen has negatively affected the economies of these countries. This effect is clearly seen in Somaliland, a country that did not have a strong economy prior to the Houthi resurgence. Gulf countries greatly appreciate Somali livestock, making this export one of the most important aspects of Somali trade. Somalia has not been able to export nearly enough livestock and other goods to keep the economy afloat. Unfortunately, the increased and indefinite evacuee traffic has led to an indefinite decrease and delay in Somalia’s livestock exports. On the other side of the economy, the residents of Somaliland have run into hard times as well. The residents of Somaliland have graciously taken in those forced to find safety outside of Yemen, putting much of the burden not on the government but on local families.

A June 3rd online article from the Detroit News briefly discusses the U.S. government’s refusal to coordinate an official evacuation of its citizens. In it, the author qu U.S. attorney Vesper Mai regarding the situation. Mai asserts that the U.S. government has “helped at least 1,500 U.S. citizens leave Yemen via ship or though third-party governments in recent months.” The reason why the U.S. government helped these citizens was not given. Since the government has admitted that it has helped evacuate this many individuals, it seems a bit odd that a government-coordinated effort has not been initiated.

In addition to the supposed 1,500 U.S. citizens earlier in the year, the U.S. government has aided in the rescue and release of one of the four U.S. hostages held captive by the Houthi rebels, according to the U.S. State Department. Casey Coombs, the released hostage and a freelance journalist, was flown into Oman with the help of the United States and the Omani government.  The Spokesperson for the U.S. State Department, Marie Harf, stated that “the US [is] doing everything possible to secure the freedom of the other American citizens being held in Sanaa.” Hopefully the rest of the hostages are rescued—along with the U.S. citizens who are currently seeking refuge in Somaliland, Djibouti, and other nearby countries.

American citizens have taken action against the seemingly complacent U.S. government. According to a report from Reuters, lawyers from the Detroit branch of the Counsel on American-Islamic Relations (CAIR) have “sought to have a federal judge force the government to order emergency evacuations of 37 American citizens stranded in Yemen.” Vesper Mai, an attorney for the Department of Justice, asserted on June 3 that evacuation was not feasible—a claim that is in line with the U.S. State Department’s previous statement on the possibility of a U.S. government-coordinated evacuation effort.

While the U.S. State Department’s stance is understandable, advice for U.S. citizens will not suffice. A May 18th Detroit Free Press Article states that there were about 5,000 U.S. citizens still stuck in Yemen at the time of the article’s publication date. Thousands of others are in places like Somaliland, Djibouti, and Puntland. The United States government needs to assist its citizens abroad and restore what little hope they have of getting home.