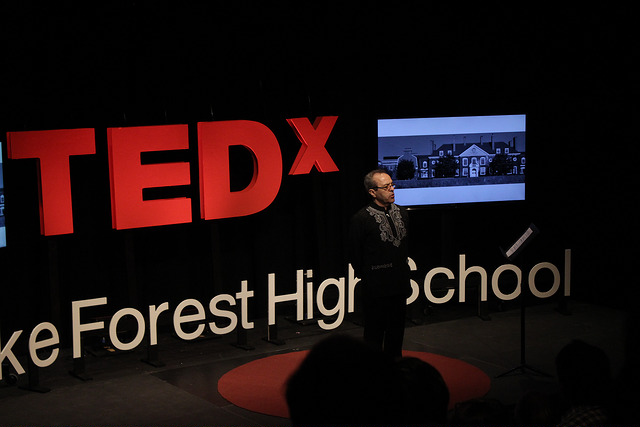 Last Tuesday, Ahmad Sadri, Professor of Islamic World Studies and Professor of Sociology at Lake Forest College and translator of a popular version of Shahnameh: The Epic of the Persian Kings, spoke at Common Ground on his detention by Iranian authorities last December as well as the factors leading up to the nuclear deal with Iran.

Ahmad Sadri’s talk took place at Common Ground an adult education center focused on the world’s cultural, philosophical, religious, and spiritual traditions. It was initially going to focus on Sadri’s reflections on Iran’s evolution toward becoming more of a secular nation and on his recent arrest and imprisonment at the notorious Evin prison of Tehran. But on the morning of his presentation, the nuclear weapons deal between the U.S. and Iran was announced. This became the perfect opportunity for Sadri to discuss the lessons he took away from his imprisonment in December and how they applied to the two-year negotiation leading to this agreement.

Last August on a trip to Iran, Sadri was arrested at the airport when he was leaving the country. Being a long-time critic of the Iranian government, he had still been able to obtain approval to travel to the country by the Ministry of Justice and had no difficulties while he was visiting. When he was arrested at the airport on the way out, it came as quite a surprise.

He was kept in solitary confinement for 8 hours at the airport without provisions. He had been up all night for his 5AM flight and used the little energy he had to keep his imagination active. He had recently translated from Farsi a 700-year old poem about mice and cats. To keep his imagination from roaming, he spent the 8 hours recalling every line and detail of the poem. There were light patterns on the walls from the single light that shown in the small cell. Even those patterns became a launching point for a fantasy about living in a crystal palace. Eventually, he was taken to the Evin prison in Tehran, notorious for its long interrogation of prisoners that are perceived to be an enemies of the state. (This was the same prison described in the film Rosewater where Iranian-Canadian journalist Maziar Bahari was detained by Iranian forces who brutally interrogated him under suspicion that he was a spy.)

Even going to the prison he was forced to drag all his luggage with him and for 6 hours was moved from room to room. Eventually, he was blindfolded and taken to the main interrogation cell. The interrogation started with the question

So Mr. Sadri finally we meet. I know what you’ve said and written. Tell me everything from the beginning of your life.

So from this open-ended beginning, they finally focused the 5 hours of interrogation on when he came to Iran. He would be freed on bail late that night but he would be brought back for several five-hour interrogations to the prison. Sadri had been an out-spoken critic of the Iranian government, especially of the 2009 Presidential election of Armadinajad. He had called the election a fraud and Armadinajad as a representative of the right wing in the country was a disaster. The interrogator wanted him to go on TV for a show-trial like appearance. This was what they had done to other intellectuals and journalists like Maziar Bahari and Raman Jahanbaglu. He refused and demanded to be sent to trial and, if convicted, to prison. The two main charges against him were “propaganda against the state” punishable by 1 year in prison and “collaboration with enemies of the state” which carried a sentence of 5 years. Sadri frustrated his interrogator by saying he didn’t really care if he went to prison or not. “I said prison was not so bad. I have a book to write and a lot of friends in prison I can hang out with.” Sadri said that the support he received from his wife and her family was the key to his being able to resist his interrogator. “If you have a family who doesn’t support you, that will be the main lever they use against you.”

They also tried to get him to “cooperate” with them by becoming a spy, which he again refused. He called their bluff by saying he wanted to defend his reputation in court, that their accusations were all made up, and pretended that he believed the judges would be fair. He had asked them why they didn’t arrest him when he came into the country and they indicated they wanted to see what he would do. He expressed some sympathy for how boring his meetings with scholars on his book must have been for those who were tracking him.

I was hated by the right wing after I wrote that the election of 2009 had been stolen by Ahmadinejad. The Ministry of Justice denied arresting me…I assumed it was an intelligence arm of the Revolutionary Guard, but they said it wasn’t us – we didn’t even know you were in Iran. They blamed the Ministry of Information.  I was well known as my translation of Shahnameh: The Epic of the Persian Kings had sold many copies. Maybe they wanted to do a publicity stunt, but when I was intransigent decided I wasn’t a good subject.

The main lesson of his detention was that it once again showed that Iran is a dual system – “a democracy within a theocracy.” The President and the parliament do hold 30% of the power with the “theocratic shell” holding the other 70%. The Iranian people – 65% of who are under 35 – do participate in the elections and the government does not want to lose their support. Hassan Rouhani, the current President of Iran, was not elected on a reform agenda, liberalization, or getting the government out of the personal lives of its citizens – all important issues for the people. He was elected because he supported the normalization of Iran’s position in the world, and promised to continue the nuclear negotiations and end the sanctions. People knew he was not a liberal. The Supreme Leader Ali Khamenei gave the negotiations the go ahead and realized the right wing policies of Armadinajad had brought the Iranian economy close to ruin.

Khamenei is part of the right wing but he is interested in survival and helping his country survive. The election of Rouhani and the success of the nuclear weapon talks has been a defeat for the right wing. Many of those against the negotiations in Iran were benefiting financially on the black market by the sanctions being in place. They had economic as well as political reasons to oppose the negotiations.

So what brought Rouhani to power? Why would the right wing body that vets the candidates for presidency even have allowed Rouhani to stand for President in the first place? For the answers to these questions, Sadri took the audience back to the origins of the Islamic Revolution and Ayatollah Khomeini’s vision of an Islamic government.

Ayatollah Khomeini’s theocratic theory of government was never accepted as legitimate by the religious authorities. For the majority 12th Imam Shi’ites of Iran who are waiting for the coming of the 12th Imam at the end of time, creating a government now is anathema. Such governments are always considered oppressive.

Khomeini’s rational arguments and sources were considered weak. That is why he did not push for an Islamic government, but pushed for an Islamic Republic instead. Democracy was adopted as a legitimization mechanism.

This approach worked for ten years until the Iran-Iraq war ended in 1988. Because of the horrendous impact of the war on the country, people started voting against the establishment and for more and more liberal representatives. The government was in a difficult position as they had to let liberal people stand for election to maintain the legitimization of the regime, but they could not be too liberal to seriously challenge their authority.

Sadri’s view is that the people of Iran are interested in Western-style democracy and in personal liberties, but don’t want the situation made worse than it already is. When the protests against the government were firmly put down by the regime in 2009, he says they just gave up when they saw the situation could slip toward armed resistance. Also now the situation in Syria serves as a cautionary tale. What he believes they want is gradual change.

Iran is the only Islamic country in the world where there is zero grassroots fundamentalism; it’s all in government. The ordinary people are not fundamentalists…the average Iranian is more secular than his or her counterpart in the U.S. Not secular in the sense that they have stopped believing in God or the Hereafter, they just don’t want religion in their politics.

Sadri brought his analysis of the political situation in Iran full circle to the lessons he learned during his detention and interrogation.

My own incarceration showed how powerless the moderates are. The President didn’t like it, but couldn’t do anything about it. This is a very divided government. It’s a very inefficient system that is not sustainable.

But Sadri’s experiences also show the weakness of the right wing in Iran. They may have been able to have him arrested and interrogated for hours, but when he refused to play along they did not have the power to take him to court and keep him from leaving the country. Just like they did not have the power to stop the Iran nuclear weapon’s deal from going ahead, especially since the deal had the support of Iran’s Supreme Leader who signed the agreement. Just as on Saturday, Ayatollah Ali Khamenei expressed his support for this nuclear agreement, he also clearly indicated that U.S. policies in the region were “180 degrees” opposed to Iran’s.

We will never stop supporting our friends in the region and the people of Palestine, Yemen, Syria, Iraq, Bahrain and Lebanon.

Even this statement by Khamenei indicates the internal contradictions in Iran’s government policy. It can’t resist the internal pressure to complete a nuclear weapons deal with the U.S. and the other Western powers. Even the U.S. policies in the region are not “180 degrees” opposed to Iran’s when it comes to fighting  al-Qaeda and ISIS in Syria and ISIS in Iraq.

Sadri recognizes these contradictions and the lack of power by the right wing which he describes as the “theocratic shell” trying to hold on to its 70% of power in Iran.

This tree is hollowed out, it surely isn’t flourishing. What storm is going to knock it down I can’t say.

Looking forward, Sadri believes that the period of Armadinajad was an anomaly and that Iran is on the road of gradual liberalization and normalization. He compared the future of Iran to the collapse of Communism’s legitimacy in the countries of Eastern Europe. The legitimacy of Iran’s own government is slowly being sapped out of the system. It’s the wind of this history that is behind the nuclear weapons agreement.

The Language of Twitter: Netanyahu Speaks to His Own Citizens