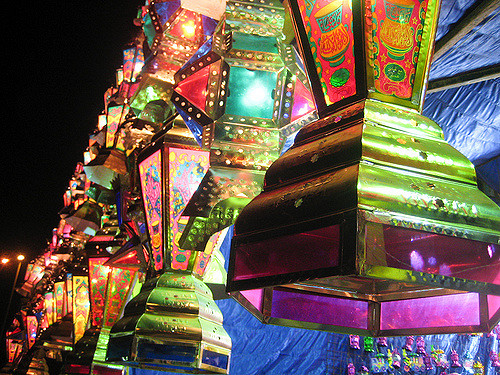 Facebook
Twitter
Pinterest
WhatsApp
Email
Print
It’s a scene you’d find in the international terminal at a global airport: men in long, crisp white thobes or jeans and a polo shirt; women in hijab styles ranging from floral turbans to floor-length draping scarves; men, women and children of every hue and profession inquisitively asking each other about destinations and their general lives.

Yet this isn’t O’Hare: it’s Muslim Community Center (MCC), 4380 N. Elston Ave., in Albany Park, Chicago. Touted as Chicago’s oldest mosque, the congregation is, as one frequenter put it, “a salad.”

Established in 1969 by Muslims from diverse backgrounds, MCC is especially vibrant in Ramadan. According to Saif Mazhar, a mosque administrator, the mosque attracts about 1,000 congregants every night. Despite parking issues and being filled to capacity, the mosque and its environs continue to attract newcomers–even if it means going out of their way to get there.

Mazhar says many of Chicago’s Islamic centers and organizations sprouted from MCC. For example, the Council of Islamic Organizations of Greater Chicago’s leadership has direct ties to MCC. Though most of mosque’s early congregants eventually opened centers closer to their homes, some still visit when they can.

“Many people that come here, from, for example Jordan, this is the first place they bring their bags, said Mazhar. “It pretty much caters to every community out there: we have African Americans, Africans like from Somalia, Hispanics, Arabs, Puerto Ricans, Cubans, Caucasians, we have even Polish Muslims.”

“It’s nice, and you’ve got to be culturally competent and culturally sensitive,” he said.

Sabih Uddin, who attended MCC as a child in the 1980s, continues to attend the mosque and works in its office. He says he’s seen many changes over the years, with waves of converts varying every few years.

“This is the mother masjid,” he said. “Right now we’re seeing a lot of new Hispanic sisters come here.”

Jacqeline Shaikh, a Puerto Rican convert, says she left for the suburbs but eventually felt the need to come back to the city, largely because of MCC.

“I took my shahada in 1991 and I’ve been coming here since 1991,” she said. “When I’m having my iftar I’m sitting down next Somalis, Arabs, Hispanics and Caucasians.”

“We love to come here, it seems like home,” she added.
Ali Bilal, who grew up on the South Side of Chicago, also chose to move closer to MCC to have better access to the mosque, especially in Ramadan.

“That’s why I come here and feel comfortable,” he said. “It’s diverse not just in nationality but in schools of thought.”

According to mosque administrators, an average of five people accept Islam at MCC every month. Ramadan conversions are especially cherished.

For the 400,000 Muslims in the greater Chicago area and around the world, Ramadan will always be a special month. But for one Islamic center in Chicago, it’s a reminder of a community devoted to staying ever-present, accepting, and of course, diverse.