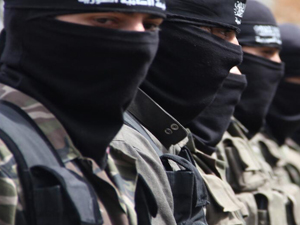 The Islamic State, ISIS, has been a self-proclaimed caliphate for one year. ISIS is considered a terrorist organization and has proven to be a formidable international threat. Originally al-Qaeda in Iraq, ISIS broke away, rebranded, and relocated to Raqqa, Syria. Unlike most modern-day terrorist organizations, though, its publicized objective is establishing a caliphate and becoming a governing body that implements their vastly unpopular interpretation of Islamic law.

Nonetheless, ISIS has attracted numerous recruits – more than 20,000 foreigners have joined the organization. They currently hold land in Syria and Iraq and have established a functioning central government. As a governing body, ISIS cannot survive as a pseudo-state without defenders to protect it or constituents to govern over. Quelling the flow of recruits enamored by ISIS’s propaganda is necessary to undermine and defeat them.

Currently, U.S. officials are deploying drastic security measures to reduce chances of an ISIS attack on American soil this weekend for the 4th of July. While there has not been a specific threat of an ISIS attack on the 4th of July, tensions are running high. Every ISIS victory legitimizes their existence and potentially increases their number of recruits. Diminishing their recruitment numbers will reduce their reach and power locally and internationally.

Common risk factors that increase vulnerability to terrorist organization recruitment are feelings of anger, alienation and disenfranchisement; dissatisfaction with their current activity and political/social results; identification with perceived victims; belief that violence against the state is amoral; a sense of reward; kinship or other social ties with perceived victims.

These risk factors, outlined by psychologist and Georgia State University professor John Horgan, are prevalent in all terrorist recruitment, regardless of the recruit’s role after admittance to the organization. A number of these risk factors are found in ISIS recruits. An estimated 3,400 of the twenty thousand foreigners recruited by ISIS were from Western countries, with most being Muslims or recent converts. Muslims in Western countries are often subject to alienation, bigotry, lack of protection and, in some cases, overt attacks from the state. Other common factors include shared religious and/or cultural ties with ISIS and identification with the victims of Western hegemony and policy in the Middle East.

ISIS’s recruitment tendencies concentrate on the very foreigners prone to these risk factors. Their propaganda appeals to the disenfranchised Western Muslim who is working through a conflict of interest and identity.  Their information dissemination is a global phenomenon, thanks to social media and globalizing technology. Their magazine, Dabiq, along with a number of similarly stylized broadcasts and commercials, are in English. Although ISIS is geographically located in a primarily Arabic-speaking area, they use English to reach a wider audience.

ISIS is catering to every risk factor that has been identified in potential recruits, which insinuates that ISIS is at least subconsciously aware of their recruits’ tendencies. Their ability to assess a vulnerable demographic and provide solutions to their struggles has allowed them to gain support from Muslim Westerners and other foreigners seeking belonging and political agency.

Locally, ISIS adapts its recruitment policies and follows insurgent tendencies. The region in which they are located is prone to insurgencies. Horizontal inequality, large low-income demographics, and dispersed populations provide climates in which insurgencies and civil wars thrive, according to University of Oxford Professor Anke Hoeffler – and all of these factors are at play in Syria and Iraq.

Both Iraq and Syria have Shi’a-led governments with sizeable, if not majority, Sunni communities. ISIS, which claims to be a Sunni organization, is a solution for the actively repressed Sunni populations. According to Vox, “Bashar al-Assad gunned down protestors in the streets during the 2011 Arab Spring demonstrations, and [former] Iraqi Prime Minister Nouri al-Maliki reacted violently to a 2013 Sunni protest movement.”

Studies show that individuals are most likely to be recruited by insurgent groups if they have predisposed elements, such as being economically deprived, marginalized from political decision-making, or alienated from political processes. In addition, if individuals expect rewards, safety or are otherwise incentivized to join the insurgency, then they are more likely to participate.

As a pseudo-state, ISIS offers locals protection, social institutions, and a religiously homogenous society. ISIS has created bakeries, banks, schools, courts and mosques, among other public goods and services, within its stronghold of Raqqa. In addition, there have been reports of ISIS offering money and women to local leaders in exchange for allegiance.

Another notable commonality in insurgency recruits is the need to address grievances due to religion, ethnicity or class, according to University of Oxford Professor Anke Hoeffler. Unsurprisingly, ISIS has received a great deal of support and recruitment due to disastrous Western foreign policy in the Middle East. Significantly in Iraq, according to University of Chicago Professor Alireza Doostdar, the cities that were most resistant to American control in the Iraq War were the first to be controlled by ISIS. Emphasizing anti-Western sentiment appeals to locals who still have fresh memories of the botched American intervention in Iraq.

ISIS’s two-pronged recruitment strategy should be met with a two-pronged deterrence strategy. Without fighters or constituents, ISIS’s goal of establishing a caliphate is impossible. ISIS recruitment needs to be met with counterterrorism internationally and counterinsurgency locally.

One way to reduce terrorist-style recruitment internationally is to alleviate grievances of affected community members and delegitimize pull factors attracting these recruits. Islamophobic comments and legislation from Western politicians and a lack of protection from the state is more than unethical– it furthers ISIS’s narrative. ISIS feeds upon the vulnerable, disenfranchised youth that have become disillusioned with the government that was supposed to represent them.

In addition, it is necessary to delegitimize ISIS’s propaganda machine. If their propaganda continues to be accepted as a reliable source, then susceptible recruits will digest it as intended. Members of all communities and at all levels of influence must condemn terrorist activity and recruitment.

In an attempt to reclaim social media from ISIS, the government began Peer 2 Peer: Challenging Extremism, which is a “university-based program focused on getting college kids to come up with social media campaigns to compete with groups like the self-proclaimed Islamic State.” This program encourages students to discuss the dangers of radicalism and promote identity awareness, social interaction and community.

It is not enough to simply deny and condemn ISIS’s recruitment strategies. Numerous Muslim community leaders have joined in condemning ISIS, but it is also important to offer alternative methods of worship. In addition to condemning the extremism ISIS claims to fight for, people of all faith communities should promote education and interfaith dialogue.

In order to reduce recruitment locally, it is necessary to employ counterinsurgency tactics. Local grievances are a product of poor political and social institutions and destructive foreign policy administered in the area. Although difficult to employ in the current climate, the local governments should push to supply more social institutions and political autonomy for their constituents, especially those who consider themselves marginalized or lack representation.

Most prevalent to US foreign policy, Western hegemony in the area has produced strong anti-Western sentiment. ISIS has used this as a rallying point among potential recruits. Although it is impossible to erase centuries of policies that have negatively impacted the Middle East, the US and other Western countries need to make an active effort to improve their image in the area.

This policy of winning the “hearts-and-minds” of locals was detailed in DePaul University Professor Thomas Mockaitis’ writing. If Western states improve their image in the area, or at least make strides toward doing so, there is a better chance of gaining the trust of locals. Since the lack of information on ISIS is a major obstacle to defeating the organization, local informants would be crucial in gathering intelligence.

Mockaitis also suggests that, “in combating terrorism, threatened states should follow the ancient adage that guides physicians: at the very least, do no harm.” With this in mind, international bodies and states should proceed cautiously when considering further policy in the area.

There were 17,049 recorded civilian deaths in Iraq in 2014, most of which have been attributed to either ISIS or the responses from the Iraqi government, US air forces and other international bodies. As long as local civilians bear the brunt of the consequences, it will be difficult for international bodies to gain their trust and easy for ISIS to lure them with promises of safety.

In order to apply effective policy against ISIS, it is necessary to remove them from the inflexible boundaries of terrorist organizations and examine how their insurgent tendencies may complicate counterterrorism policy against them. While the terrorist-insurgent hybrid is apparent in recruitment, this dichotomy may lend itself to other aspects of the organization. Reassessing its category may lead to a change in policy that will effectively topple ISIS.