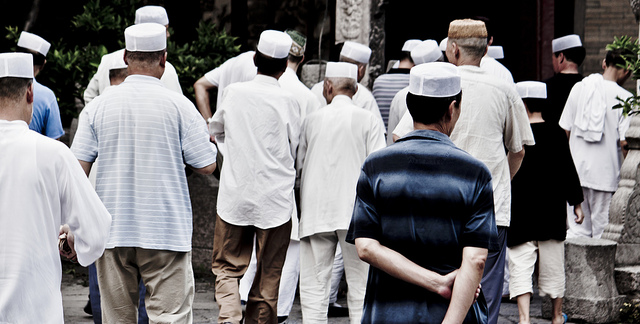 Facebook
Twitter
Pinterest
WhatsApp
Email
Print
There have been conflicting reports in the news media about whether the Chinese government banned Ramadan in the main Muslim area of China, the Xinjiang Uygur autonomous region. Some news outlets in the U.S. want to portray the Chinese government to be intolerant of religious minorities. Other sources want to portray the Communist government as being tolerant of the varied cultural traditions within the country. What is the real story?

First some historical context. The Xinjiang Uygur Autonomous region is located in the border area of northwest China. Xinjiang occupies one sixth of the Chinese territory and is about 1.6649 million square kilometers. It has a land border connected with eight countries. There are 47 ethnic groups in Xinjiang. In the year 2004, Xinjiang had a population of 19.63 Million, including 45.73 percent Uygur, 39.75 percent Han, and the rest other ethnic groups.

Islam arrived to the area after Buddhism and Christianity. During the Tang Empire, Muslim traders began to arrive in China. Also, many Muslims were brought by Mongol Yuan Empire to help them govern and administrate China. Islam spread quickly in central Asia by Muslim nomadic tribes between Arabia and China. In this way, a lot of small ethnic groups in China such as the Uighurs, Kazakhs, and Tajiks became Muslim.  In China, people are mainly Muslim by birth because few Chinese convert.

Muslim ethnic groups are found mainly along the borders of modern China in Yunnan, Tibet, Xinjiang, Gansu Province and Henan Province.  Ten of the total of fifty-six ethnic groups in China are classified as Muslim.  Uighurs became Muslim about 400 or 500 years ago and live mainly in Xinjiang. The Hui people who are about 12 million Chinese Muslims live all over China. They are regarded as the Hui ethnic group by the government, although they are simply Chinese Muslims who are perhaps descended from Mongols or other traders and administrators.  During the Mongol-founded Yuan Dynasty (1271–1368), many Muslims were brought to China and had elevated status. Following the Ming Dynasty, Muslims were still very influential in government. However, the Ming restricted Muslim Immigration and the dynasty became isolationist.

On May 23 2014, Uyghur suicide bombings at an Urumqi marketplace killed thirty-nine people and injured ninety-four. Five years earlier, 197 had been killed and 1721 injured during ethnic riots in Urumqi in July 2009. In July of 2015, the Xinjiang Party chief, Zhang Chunxian, demanded strengthened control of religious affairs and suppression of criminal offences by religious extremists.  Haiyun Ma, an assistant professor at Frostburg State University, said that during the recent year’s Ramadan, local authorities made it difficult for Uyghurs to perform their religious obligations. Ma stressed that various local authorities such as municipal, town, school administrators, and village government officials have issued their own restrictive policies on Ramadan fasting and other religious practices. It seems that the government is trying to restrict criminal violence and religious extremists by limiting religious activities in Xinjiang.

Tursun, a researcher at Sichuang University China, says that economic issues are the main reasons that inspire violence in Xinjiang. During 2000 to 2010, the number of unemployed Uighurs over 15 years old increased from 1.348 million to 1.777 million.

According to Hana Levi Julian, a Middle East news analyst, the Chinese government seems to ban Ramadan for all Muslims in Xinjiang province. However, Michelle FlorCruz, a native of the Philippines who was a high school student in China, said fasting is banned only for Muslim government employees, students and teachers. Therefore, the answer to the question of whether China really bans Ramadan is still not clear.

There are many references of China banning Ramadan, but most of them cannot be found on an original website or were issued in 2014 and not 2015.  Some Chinese news websites make reference to a ban.  For example, one article shares that the “Turpan Prefecture Bureau of Commerce requires civil servants not to participate in religious activities”, and is dated July 3, 2014. The article continues, “Second, all party members and civil servants are prohibited to engage in religious activities, such as fasting and performing namaz (prayer) in mosques.”  Because the ruling party is officially an atheist party, party members are not allowed to have religious faith unless they discard their position in the Communist Party.  The Communist Party proclaimed, “that Communists cannot have religious ties—this is the consistent principle of our party”. But it is clear that these references are to Communist Party members specifically and not to the general population.

In addition, the documentation from Turpan indicates, “civil servants should also actively educate and guide their families and friends to consciously resist the erosion of society [caused by] illegal religion”. However, none of these statements can be found on Turpan’s official government website.

Moreover, in some English language newspapers, there is a Chinese school in Xinjiang province frequently cited for prohibiting religious activity in school. It is said that teachers are not allowed to infuse religious thoughts to students and no religious activities are allowed, “…no parent or others can force students to have religious beliefs or partake in religious activities.”  From a simple web search, it shows the school policy was published on June 30, 2014, and yet again, this statement does not exist on the school’s website.  Additionally, the Chinese government denied that they intend to keep Muslims away from Ramadan.  CNN News reported that the Chinese embassy finds fault with “… foreign media regarding the banning of fasting during Ramadan [and this] is complete nonsense”.

On the contrary, there does exist some evidence of China’s attitude toward religious activities in school.  Luntai No. 3, a Xinjiang primary school, states that “no student or teacher participated in Ramadan or breaking national unity in our school” on May 28, 2014. This statement shows the school believes students and teachers should not be involved in religious activity.

Overall, it seems that China tends to want to reduce religious practices and their influence in school and in government. From the documentation, it would appear that this is not a consistent government policy implemented in all schools and may be just be done in schools where the administrator is sympathetic to restricting some forms of religious activity. However, it is hard to find current reliable supporting material about whether the government actually bans Ramadan in Xinjiang province. Besides, it is clear that Islam has a thousand years of history in Xinjiang that is not going away anytime soon and that Muslims are a recognized minority by the Chinese government.  It is a complex historical, political, and economical issue that cannot be resolved by superficial articles claiming that Ramadan or other Islamic practices are actually banned in China.