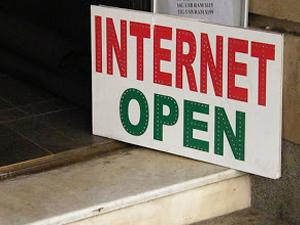 Sam has a homework assignment for English. Sam has a smartphone, Sam has a computer, but what she lacks is an internet connection. The solution is simple enough: go to a public library. Sure, alright, but what about the history paper due next month or the chemistry project due at the end of the year or just a desire to explore the abyss of information known as the internet? What then? Camp out at the library with a satchel of trail mix and a canteen of water? Her family can’t afford the $40 internet connection everyone else has, and neither can millions of other Americans.

Tens of millions of people live their everyday lives without a single trace of a router or modem in their households. Yes, that means no WiFi. Many people fail to realize that the internet is a privilege; it is a service that we must pay for in order to use. Places like the public library, Starbucks, McDonald’s, and your local Marriott Hotel provide free internet for everyone, including Sam, but they come with their own imitations. At the library, people are often given a time limit and a very, very old computer to work with; in other words: if you want that video to load completely, it should have been buffering since 2009. Open WiFi at Starbucks and McDonald’s is excruciatingly slow due to the sixteen laptops, twelve tablets, and twenty-three smartphones operating on the same network. And if you want to buy that $30 burger at the Marriott in order to access the internet “freely” then be my guest.

Let’s rule public WiFi out of the equation. So Sam can’t afford a regular internet package deal and she can’t rely on public access WiFi, is there anything else?

According to cheapinternet.com, there is. Low-income families are in luck! There are several internet service providers that have special deals to fit the needs of families of any income. Prices range from $9.95 to $15 and they also offer tablet and computers for as low as $150. Availability varies by state. Score for Sam! So small internet companies are able to offer such deals, but what about internet giants? Time Warner Cable? Verizon? After some deep, extensive research I was able to find a few plans from some internet giants. Comcast and AT&T both offer affordable internet bundles for low-income families. Comcast calls theirs ‘Internet Essentials’ because the internet is kind of essential for life. Internet only costs $9.95 a month plus tax. Comcast’s services are open to anyone in the 50 states who has a child qualifying for the National School Lunch Program, and pride themselves on serving 1.8 million students and families. AT&T’s ‘Lifeline’ service is a bit more selective; they only serve 15 of the 50 states and only to those who qualify for any federal assistance program (Medicaid, SNAP, National School Lunch Program, etc.).

It’s great that Comcast and AT&T both are providing their services to people who need them, but my only concern is the amount of coverage on this. It’s next to none. Many people in need still don’t know about these amazing opportunities for them to get affordable internet because it’s not advertised on TV or talked about on the radio or shared amongst family members, friends, and peers. Aren’t these services still providing Comcast and AT&T with some profit? If so, why aren’t they being shouted into the void and advertised at every nook and cranny on earth? Who knows really… but speaking from me personally, as someone who took business for a semester during sophomore year, dear Comcast and AT&T, advertise your affordable services a lot more, you can be making some serious money.