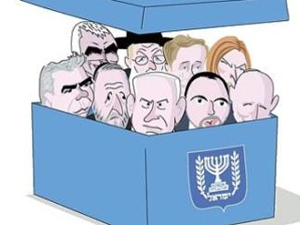 As the March 17th election results rolled in, the Likud Party and their leader Benjamin Netanyahu celebrated a resounding electoral victory over a left-wing coalition that had only a few days prior been neck-in-neck with his party. The Israeli Right’s place at the top of the political hierarchy had been reconfirmed. This conservative moment of triumph did not last long.  In May Netanyahu was barely able to form a majority government, and the one that came out of months of negotiations seemed about as stable as a house of cards. The elections and subsequent coalition-building process have implications that go far beyond routine party politics. The process illustrated the dominance of identity politics in modern Israel; the instability and splintered nature of the electoral system; and the desperation of the Israeli political sphere in the face of difficult challenges to its hegemony.

The 2015 parliamentary elections took place following the collapse of the previous Likud-led government, which was riddled with internal strife between Prime Minister Netanyahu and more left-leaning members of his cabinet who challenged him on important policy decisions. Divisions within the cabinet and the parliamentary coalition came to a head surrounding the national budget and the so-called “Jewish nation-state” proposal, leading to a breakup of the coalition in December 2014. The nation-state proposal was a controversial bill drafted in 2011 that would have proclaimed that the state of Israel is the “nation-state of the Jewish people.” This concept contrasted  with current definitions which declare that the national home of the Jewish people is in Israel, but that the state is simply an ambiguous “Jewish state.” In addition, the bill would have reduced Arabic to “a special designation” from its current co-official status with Hebrew, and declared that only Jews have a right to self-determination in Israel.

In many ways, the bill would have officiated practices and policies that have been in place for decades but have traditionally lain outside of the jurisdiction of lawmakers, most notably the preferential treatment of Jews in Israel and the Palestinian territories. Traditionally, the meaning and implications of Israel’s designation as a Jewish state have been left up to the courts and the military, but the nation state proposal would have transferred this responsibility to lawmakers, thus potentially enshrining discriminatory Jewish-centric policies and attitudes into law. Some argue that the bill could have actually reinvigorated the Palestinian-Israeli peace process as proclaiming Israel and its territories as exclusively Jewish would have necessitated granting Palestinians their own state. However, Palestinian opponents of the bill argued that passing it would preclude Palestinians living in exile from returning to the homes they were forced to leave during the Nakba, or ‘catastrophe,’ of 1948-1949 that occurred during the First Arab-Israeli War. The proposal was never passed by the Knesset. Following the collapse of the majority coalition in 2014, the central theme of the legislation, i.e. the idea that Israel should function for the benefit of Jews exclusively, was pervasive throughout the election and has shaped the resulting government ever since.

The March 17th election was an unusual one in Israeli history, as unlike many previous ones, there was no clear victor ahead of the vote itself. The Likud Party once again ran candidates for reelection with Benjamin Netanyahu at its helm, and was met with a formidable challenge by the center-left Zionist Union led by Isaac Herzog. Because the minimum percentage needed to gain seats in the Knesset was raised to 3.25% prior to the elections, many small Arab parties ran together as the “Joint List” for practical purposes, and many smaller parties that chose not to do so were eliminated.

The two major parties, Likud and the Zionist Union, fought fiercely against one another during the campaign season, with Likud fielding inflammatory ads suggesting that left-wing parties were terrorist sympathizers. In one ad, ISIS militants ask a driver on the road for directions to Jerusalem, to which the driver responds, “take the left,” and the ad ends with a slogan in Hebrew that reads “The Left will surrender to terror.” The aggressive competiveness of Likud’s campaign most likely stemmed from the very real threat of the Zionist Union unseating them from power, evidenced by the fact that even the eve of the election itself there was no favorite to win. In a desperate move, Netanyahu’s camp infamously decided to resort to anti-Arab fear-mongering to draw right-wing voters away from other conservative parties, and he stated publicly that under his prime ministership, no Palestinian state would ever exist. In the final hours before the polls closed, Likud raised the alarm on social media that “Arabs were going out in droves to the polls,” and that the Left had ties to Arab interests. Apparently his cynical tactic worked, as Likud’s numbers quickly skyrocketed and carried them to victory, reflecting the depth of right-wing Israelis’ sense of insecurity. History seemed to repeat itself once again; the circumstances and issues that necessitated the new election were pushed aside, and just as with almost every other election in Israeli history, this one wound up revolving around security.

By winning for a fourth time, Likud was hailed as coming out of the elections very strongly, and for many, the Right had reasserted itself after an uncomfortable 2013 coalition in which the party’s latitude had been restricted by more moderate parties. Strikingly however, Likud rode to victory on the coattails of only 23% of the electorate, meaning that less than a quarter of the country supports it as the ruling party. Commentators have thus bemoaned this outcome as evidence of the deeply fractured state of the Israeli political system, in which a host of tiny parties grapple for a slight edge over the others, with no single party truly representing Israel’s majority.  Few of them aim to do so – throughout the elections, there was little emphasis on concrete platforms, and the contest between Likud and the Zionist Union revolved mainly around personalities, appeals to each party’s traditional base, and the abilities of Netanyahu and Herzog to defend Israel from its “enemies.” This focus on empty politicking arose again during the coalition building process after the elections, during which Netanyahu struggled to form a majority government with the other parties that held seats after the elections. With only two hours to spare, the Prime Minister managed to cobble together a coalition that, while more homogenous than the 2013-2014 government, was clearly not well-thought out and was constructed expressly in order to meet the May 6th deadline.

While mostly right-wing, the parties in the 2015 coalition collectively only hold 61 seats, running the gamut from the centrist Kulanu to the deeply conservative and Orthodox Jewish Home and Shas parties, and thus include many deep ideological decisions. Consequently, it is likely that the new government will not last long. However it is clear that the coalition will be a decidedly anti-Palestinian one, with most of the parties professing pro-settlement and hawkish stances with a general disregard for any rekindling of the peace process.

Given these outcomes, the elections and Netanyahu’s coalition have made it clear to Palestinians that they need not even negotiate with the Israeli government, as the ruling parties have no intention to address their interests. Although the Jewish nation state proposal was not a major focal point during the electoral race, the new ruling coalition could easily reintroduce the bill and pass it, enshrining the Israeli Right’s Jewish-centric agenda into law. However, perhaps most troubling is the fact that even without this bill, the right-wing coalition could continue to pursue and magnify discriminatory and expansionist policies against Palestinians and Arabs in Israel, the West Bank, and Gaza in the name of national security. Now that Netanyahu and his party have made their views on Arabs abundantly clear to the public, Palestinians can surely expect further segregation between Jews and Arabs in Israeli society, and the government can expect heightened hostility from the international community towards themselves and their occupation of the Palestinian territories.

In addition, by consciously fomenting dangerous identity politics in Israel to win the election, Likud have contributed to the increasing descent of Israeli society into ethno-religious factionalism, separating the party’s base of fiercely nationalist Jews from more liberal and non-Jewish Israelis. In fact, according to the Times of Israel, the greatest predictor of voting patterns in the elections was not socio-economic status as in most other developed countries, but rather self-professed identity and ‘tribal’ association. Almost every group within Israeli society voted for whatever party they perceived as advancing their ethno-religious agenda, with little emphasis on broader policy. Of course, no demographic is monolithic, but in this election, the chances that one could accurately guess the voting behavior of an individual based on his or her place of residence and self-described identity was rather high.

This increasing self-centeredness among many Israelis comes at a time when the challenges to Israel’s current position are stronger than ever before. By strengthening divisions within Israel, and more broadly across the entire territory of Palestine, the ruling coalition is building an Israel that is unready for the trials that lie ahead. With a political system so fraught with divisions and ineffective policymaking, it is dubious that Israel will be able to withstand future problems like growing violent and nonviolent efforts to create a Palestinian state, increasing international isolation, and challenges from the outside to its hegemony. The more vigorously the ruling Israeli Right rages against efforts at reform and the recognition of Palestine as an independent state the more it will pigeonhole the country as an international pariah.

Over the last few years, the United Nations, Europe, and even Israel’s longtime ally the United States have ramped up the pressure on Netanyahu’s government to confront the Palestinian issue and to honor international resolutions and treaties. In addition, there is the pressure from recent accusations by the International Criminal Court that both Israel and Hamas had committed war crimes during the 2014 Gaza War. With its new weak yet aggressive government, Israel will most likely continue to wave its fist at the rest of the world with cries of unfairness, anti-Semitism, and betrayal, all while quickly losing the ability or the will to make any progress at home or abroad.  Many have also expressed concern about the future viability of the Israeli state itself, pointing to the divisive identity politics employed during the election in addition to the looming demographic problem. In terms of pure practicality, if current growth trends continue, Jews will soon become a minority in their own land, and the Arab population of the occupied West Bank will reach a breaking point and may not be able to be contained by current restrictions.

With traditional Israeli society itself under threat, much of the country’s populace and government have grown reactionary. Although the Jewish nation-state proposal has not played a major role in the election and its aftermath, its core principle of a “Jews first” society has trickled down into the very fabric of the state itself. Like a dying bear pawing blindly at its opponent, Israel has grown more desparate, refusing to think reasonably about solutions. In order to continue to exist as a stable Jewish state, Israel must take the long-neglected peace process seriously, and use its religious, ethnic, and ideological diversity to its advantage again in order to accept change rather than stubbornly resisting it.