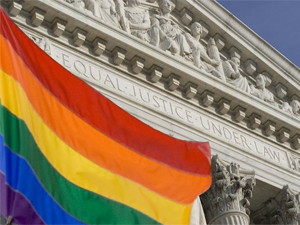 The argument made by the respondents (opposing same-sex marriage) as Justice Kennedy stated was to “proceed with caution—to await further legislation, litigation, and debate.” The idea of same-sex marriage is not a new idea. Many same-sex couples have been together for decades, waiting for the day that they can finally marry the person that they love. As Kennedy later states, gay marriage is not a new issue. There have been referenda, legislative debates, and grassroots campaigns. There have been studies, papers, and books on this issue for decades. There have been numerous debates at the state and federal level.

Kennedy also states that democracy is the answer for many political issues, except when a fundamental right is at stake. Fundamental rights are not subject to a vote. James Obergefell wanted to be the surviving spouse on his husband’s death certificate. April DeBoer and Jayne Rowse wanted to be able to co-parent their children in a state where only single individuals or married couples could adopt children. Ijpe DeKoe and Thomas Kostura wanted to have their marriage recognized after moving to New York, where the marriage was recognized, to moving to Tennessee where the marriage was not recognized. The trouble with waiting for each state to recognize gay marriage on their own accord is that when two people travel, rights as a married couple are given and taken away through interstate travel. Fundamental rights were at stake for Obergefell, DeBoer, Rowse, DeKoe, and Kostura as well as the thousands of same-sex couples who desire to marry.

Chief Justice Roberts, Justice Scalia, Justice Thomas, and Justice Alito all wrote dissenting opinions for the case. Each dissent discussed how this would be less detrimental if people had chosen to do this. However, the minority opinions state that the majority has now closed and shut the debate on gay marriage. As Chief Justice Roberts states “Under the Constitution, judges have the power to say what the law is, not what it should be.” They argue that skeptics of gay marriage will have far more animosity because this was not chosen by the people. As Thomas says, this was chosen by judges that are far from representative of the people. Thomas states

Eight of [the nine justices] grew up in east and west coast states. Only one hails from the vast expanse in-between. Not a single Southwesterner or even, to tell the truth, a genuine Westerner [California doesn’t count]. Not a single evangelical Christian [a group that comprises about one quarter of Americans], or even a Protestant of any denomination.

Thomas is arguing that all nine justices do not have any right to make laws that people must adhere to when the judges are not a representing body.

Chief Justice Roberts ends his minority opinion by attempting to sour the victory that many will have over the decision to allow gay marriage. Roberts states

If you are among the many Americans – of whatever sexual orientation- who favors expanding same-sex marriage, by all means celebrate today’s decision. Celebrate the achievement of a desired goal. Celebrate the opportunity for a new expression of commitment to a partner. Celebrate the availability of new benefits. But do not celebrate the Constitution. It had nothing to do with it.

The Supreme Court should not intervene or create laws and force people to adhere to those laws. However, when a fundamental right is taken away, the Supreme Court must uphold the Constitution. The Constitution has recognized marriage to be an important right and has teetered over the years in deciding whether this was a fundamental right. In DeBoer v. Snyder, the Sixth Circuit Opinion, stated that a marriage could be considered fundamentally important, but it was not a right. However, with this Supreme Court ruling, that logic is now subsequently overturned.