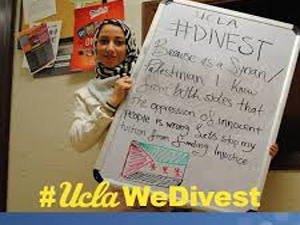 Facebook
Twitter
Pinterest
WhatsApp
Email
Print
Twelve long months, sixteen hours of brutal debate, and one failed attempt. Even after these obstacles, the undergraduate student government of the University of California, Los Angeles (UCLA) successfully passed a resolution that called for divestment from companies that profit from human rights violations in the West Bank and Gaza.

As a student who experienced this historic vote during my freshman year, I would be lying if I said I was surprised by the increasingly negative campus climate that resulted from the vote. I was not surprised by the tension that grew between some of my closest friends. I was not surprised that I was stopped on my way to class and challenged by complete strangers for my views. And I was certainly not surprised about the completely unacceptable comments and generalizations made by both sides.

Yet one thing still surprises all these months later: the critical role played by those outside of the university.

This became clear to me earlier this year on the morning of Sunday, February 22. As I was on my way to breakfast, I was met with a poster of two masked men with AK-47s on either side of another person on his knees with a bag over his head. The poster simply read “Students for Justice in Palestine” with the hashtag “JewHaters” written at the bottom.

While it would seem natural to assume that this poster and the many duplicates that were placed throughout campus were the work of anti-boycott, divestment, and sanctions groups at UCLA, I knew that this was much too malicious for students at my university. The origin of these hateful posters became clear a few days later when conservative writer David Horowitz claimed responsibility in an interview with the Jewish Journal. However, he initially claimed to have no connection with the posters when interviewed by UCLA’s newspaper Daily Bruin. According to the same article, the posters were created by the David Horowitz Freedom Center (DHFC). The organization’s mission claims that “The DHFC is dedicated to the defense of free societies whose moral, cultural and economic foundations are under attack by enemies both secular and religious, at home and abroad.” In particular, the organization works to combat the efforts of “the radical left and its Islamist allies” and focuses its actions on college campuses.

The DHFC has been involved in the undergraduate student government’s move to recommend BDS since it was first proposed in February 2014. Truth Revolt, a project of the DHFC, began to report on the vote after its founder and editor-in-chief Ben Shapiro claimed to have “crashed” a divestment hearing at the school. During the hearing, Shapiro aggressively defended Israel and labeled the entire BDS movement as a form of Jewish hatred. He went on to discuss his involvement in the vote shortly after its failure in February 2014 on the program The Glazov Gang. Not only does Shapiro detail his efforts to halt the measure from passing in the episode, but he even goes on to join his colleagues in laughing about a pro-BDS student who became upset about the outcome of the vote. 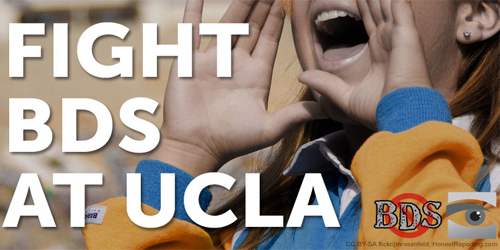 Groups on UCLA’s campus turned to outside help, as well in their efforts to combat BDS. Hillel, which is the largest Jewish campus organization in the world, partnered with the public relations firm 30 Point Strategies for this sole purpose. Leaders at UCLA’s Hillel discussed ways to fight the BDS movement on campus with the firm and even prepared for ways to respond if BDS was adopted by the student government. This was revealed due to leaked emails between the firm and Rabbi Aaron Lerner, UCLA Hillel’s senior Jewish educator. Hillel at UCLA has given money and support to student government candidates that vowed to fight divestment and in July 2014, The Daily Californian reported that Adam Milstein, a right-wing pro-Israel philanthropist, donated to UCLA Hillel for the same purpose.

Students for Justice in Palestine (SJP), the group that brought the BDS resolution to the student government and campus’ attention, took a very different approach this past November. As opposed to turning to outside groups and organizations to strengthen their cause, they relied on their fellow students. The organization came to the divestment hearing in the fall with 32 student organizations endorsing the move for divestment—15 of those organizations co-sponsoring the resolution—and 15 formal endorsements from distinguished faculty members. It was this large support base that persuaded the undergraduate representatives to pass the resolution with eight voting in favor, two against, and two abstaining.

Although SJP and its supporters succeeded in passing the resolution, both the campus and University of California administration immediately refused to take any action. UCLA Chancellor Gene Block issued a statement two days after the resolution passed on November 20 in which he claimed “divestment decisions should not hold any one organization or country to a different standard than any other.” He then went on to say that UCLA “does not support divestment in companies that engage in business with Israel.” Janet Napolitano, former Secretary of Homeland Security and current President of the University of California, held a similar stance when interviewed by Daily Bruin in April 2014. Napolitano referred to the UC Policy on divestment from 2010, which states that the University will only divest from a foreign government if the US finds that it is committing acts of genocide. As a result of these responses, the passing of this resolution remains only a symbolic win for its supporters.

Regardless of the administrative response to the resolution, it was and still is celebrated by many on campus.

Only students can decide the fate of their university, and that makes me proud to be a Bruin.