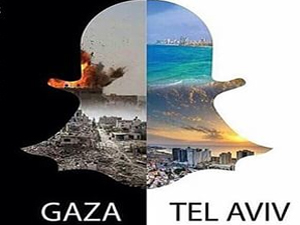 Facebook
Twitter
Pinterest
WhatsApp
Email
Print
After Israel recently electing a government that has been described by Al Jazeera News as “the most extremist in the country’s history,” the Israeli attack on Gaza last summer, killing 2,139 Palestinians, reached its first year anniversary on July 8th.  The current elected government of Israel includes members that want “a full- scale invasion and reoccupation of Gaza to wipe out the Palestinian factions”. 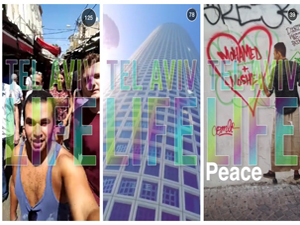 On the one year anniversary of the Gaza attack by Israel, leaving up to 500,000 Palestinians displaced, Snapchat, a social media application used by 100 million people daily, posted live video coverage of Tel Aviv accessible on the app’s “story” feature. The video stream captured the life of Israeli citizens that were enjoying views of the many skyscrapers and beaches that were part of a beautifully lit skyline. The four minute collection of 10 second videos not only showed Israelis in outdoor shopping malls, men and women dressed in summertime clothes saying “here in Tel Aviv, we have everything,” but also having fun eating traditional Palestinian cuisine like shawarma.

As the people of Gaza mourned the loss of their loved ones, Snapchat made their grief especially discouraging as the world was given a four minute window into the peaceful, seemingly undisturbed lives of Israelis who just last year killed civilians, displaced families and left painful memories in the minds of millions of Palestinians. The people of Gaza watched as Israelis attended concerts and ate shawarma on the same land that was once enjoyed by their ancient ancestors. Unsurprisingly, these sights were infuriating, and were the source of a lot of controversy that was trending on Twitter and Facebook.

Here are some of the tweets that were featured using the trending hashtag #TelAvivLive: 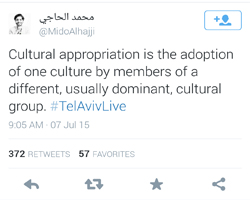 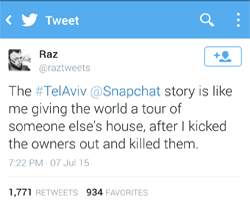 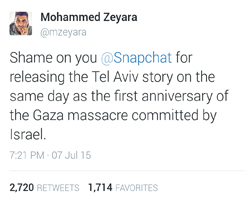 Social media was flooded by people who believed it was unfair that Tel Aviv was featured on Snapchat, and demanded there be a West Bank “story” featured on the app to show the other side of the story, literally. Snapchat obliged to all of the demands and announced that the West Bank would be featured the next day.

On the morning of July 9th, Palestinian families all over the world were thrilled that they could finally celebrate this small victory. It was a chance to give the world a view of what it was like on the other side of the Apartheid Wall. Palestinians who have been away from their country for generations were given the opportunity to see the genuine beauty of their homeland that featured the cities of Jerusalem, Ramallah, and Bethlehem. The spirit of the Palestinians was expressed by the stream of videos that varied from olive trees, knafeh, and people who were enjoying a simple life while fasting for Ramadan, to videos of Israeli checkpoints and views of illegal Israeli settlements on Palestinian land. Snapchat became a platform for Palestinians to give people an unfiltered view of not only the beauty of their traditions, foods, and their land, but also life under the occupation of Israel.

Some of the responses on social media, however, labeled the stream of videos as anti-Semitic. One of the tweets read: 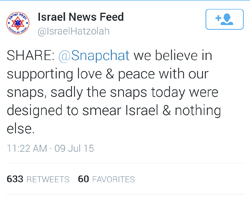 In spite of these negative tweets, reaction to Snapchat’s Palestinian story has been overwhelmingly positive.  The trending hashtag #WestBankLive featured tweets of Palestinians all around the world that were deeply moved by little pieces of their land that showcased for the world like never before. While the media often portrays this part of the world as radical and violent, it was finally viewed from another perspective—all thanks to Snapchat. 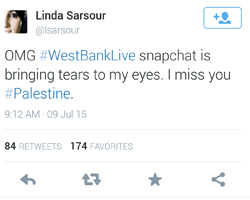 Through Snapchat, an app predominately used by 13-24 year olds, some Palestinians were given the opportunity to see their homeland for the first time and, just as importantly, the world was shown how different life is in Israel compared to Palestine. For instance, the Dead Sea is shared with Israel, the West Bank, and Jordan. Across the Jordanian shore, you can see a beautiful strip of lights across the water that abruptly turns dark and lifeless. One side of the shore is Israel, and the pit of darkness in the far corner of the view is the West Bank. If one were to measure the value of life through the number of lights on the coast of each chunk of land, it would seem that the life of an Israeli is one that is more developed and nurtured. The lights are brighter, the buildings are higher, food is more easily attainable, the electricity is more consistent and the grass is greener on the Israeli side, literally. But to a tourist sitting on a mount of salt on Jordan’s coast, the West Bank and millions of Palestinians are invisible, lost in the piercing blackness of the water and the shore of the West Bank. But on July 9th, the region was lit up in the eyes of Snapchatters—it might have just been a #RamadanMiracle.

The Romney heard ’round the world