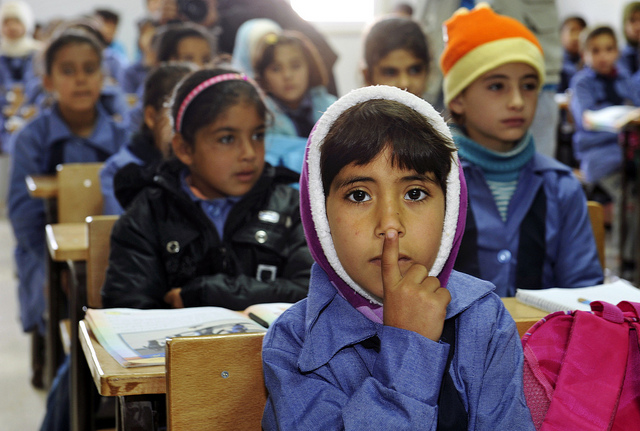 The Syrian civil war, with its origin in the country’s 2011 Arab Spring anti-Assad protests, has left the country riddled with sectarian violence. As the various militant groups trade control over swaths of territory, death and destruction remain ubiquitous in the region. While television networks stay fixed on the conflict, especially with the recent rise of the Islamic State, Syrian civilians continue to be caught in the middle. 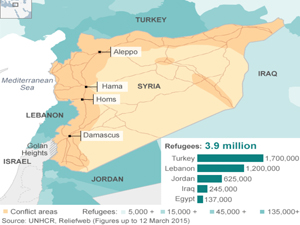 According to the United Nations High Commission on Refugees (UNHCR) as of July 15, 2015, over 4 million Syrians have fled the country seeking protection in whichever part of the world will admit them. These numbers make Syrians the highest refugee population in the world by nationality.  This does not even include the Internally Displaced Peoples (IDPs) unable to evacuate the country estimated at 7.6 million. Antonio Guterres, the UN High Commissioner for Refugees, mourned the situation in a statement calling it “the biggest refugee population from a single conflict in a generation.” The surrounding states including Turkey, Lebanon, and Jordan have taken on the bulk of the refugee population with around 90 percent residing in these countries. The refugees are resettled into camps, which suffer from overcrowding and lack of resources. Additionally, Syrians are often stigmatized as outsiders and looked upon with a questioning eye, making work and basic necessities difficult to obtain. Even with the aid of the United Nations and various non-government organizations (NGOs), these bordering states are approaching maximum capacity.

In recent months, because of failed action by countries outside of the region to facilitate safe passage and resettlement, a troubling development has arisen in human smuggling by boat across the Mediterranean and into Europe. Refugees from Syria and migrants from several other politically unstable countries (like Libya and Somalia) face unsafe journeys on boats with no regulation often characterized by sickness and death. To date, at least 1,868 drownings have been reported by the International Organization on Migration (IOM)—a death toll that already more than quadruples those reported in the 2014 fiscal year. These journeys represent a last ditch effort to achieve any semblance of normalcy for the families. Both the loss of human life and the economic toll taken upon the European states resettling refugees has the European Union (EU) scrambling for solutions.

A proposal for establishing a refugee resettlement quota of 40,000 persons for EU member states was put forth in May and met with varying levels of enthusiasm by the respective national governments. The quota does not refer to total refugees allowed within the continent.  Instead it looks to transfer those already in Italy and Greece, the two countries housing the most refugees, to other EU states. Unlike citizens of Europe who, thanks to the Schengen Agreement, can move freely throughout the EU applying for work and housing in any member country; refugees are restricted by what is known as the Dublin Convention. This protocol insists that any refugee must remain within the state in which they are first documented upon arrival and granted provisional documents by this host state. There are privileged statuses — if any status pertaining to a refugee can be called a privilege — in which those fleeing war can more easily navigate the different bureaucratic channels and achieve rights for reuniting with family members across the region. Yet the process is difficult to fulfill requiring time and legal representation (i.e., money). Because of this, agreement on resettlement becomes all the more important.

While proximity makes Europe a suitable option for many fleeing Syria, other countries around the world have offered asylum for those meeting their qualifications. The United States groups itself with these countries, yet has received critical reproach from many for the limits placed on its asylum program. In the 2014 fiscal year, only 249 refugees were housed in the U.S. Since Last October, the numbers have increased to just short of 800 but comparatively speaking, the total remains remarkably low. Brazil, for instance, issued over 6,000 visas in that same time period.

Low refugee admissions recently prompted U.S. Senate Democrats, led by Majority Whip Dick Durbin of Illinois, to draft an open letter to President Obama urging a drastic increase in allowances. The letter notes that “[w]hile the United States is the largest donor of humanitarian assistance to Syrian refugees, we must also dramatically increase the number of Syrian refugees that we accept for resettlement.” It goes on to make reference to the U.S. as a historical refuge for people seeking religious tolerance in particular, and notes a responsibility, which the nation has to provide open doors for the persecuted of the world.

Historically, the U.S. has accepted around 50% of the refugees submitted by the UNHCR. However, in the post-9/11 world where fears of extremism penetrating our borders remain omnipresent, Syrian refugees fall victim to an arduous bureaucratic process and increased discrimination. Because of the turbulent atmosphere in Syria, an uncertainty exists surrounding the process for vetting those displaced seeking U.S. asylum. Institutionally, much has broken down for the U.S. in the region as a result of the conflict. Yet this situation leaves many with no place to turn, caught in the middle as by-standers to a bloody struggle.

In spite of overly generalized fears, hope for an increase of the number of admitted refugees continues. Larry Yungk, a senior resettlement officer at UNHCR, believes the U.S. numbers will rise in the second half of this year. How large that potential rise could be remains to be seen, but any progress should be applauded.  Additionally, to quell fears of a bureaucratic lapse, David Miliband, president of the International Rescue Committee, stated “We are confident that appropriate checks can be made in far quicker time to first of all reduce the suffering of the refugees in limbo, but secondly to offer the solidarity that the neighboring countries need.”

As an end to fighting in Syria does not appear likely in the near future, a more complete and unified policy will need to be implemented in dealing with refugees. Governments from around the world have poured enormous amounts of money into the conflict in order to push their respective agendas. Not denying the vast importance of politically stabilizing the country is for Middle Eastern affairs, those displaced by the conflict cannot be forgotten in this effort.