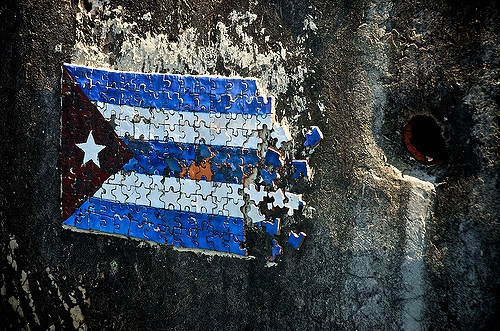 “El bloqueo,” as Cubans call the United States’ 1962 embargo, consists of commercial, economic, and financial sanctions, as well as restrictions on travel and commerce with the island.  The 54-year policy has failed to achieve its goals, namely that Cuba adopt a representative democracy and shed its communist rule.  Further goals of the embargo include the improvement of human rights and resolving $8 billion worth of financial claims (mostly in confiscated property) by corporations and individual families against the Cuban government.

Cuba does not pose the same threat to the United States that it once might have during the Cold War.  The USSR dissolved in 1991, and the U.S. Defense Intelligence Agency released a report in 1998 stating, “Cuba does not pose a significant military threat to the U.S. or to other countries in the region.”  The embargo can no longer be justified by the fear of Communism spreading throughout the Western Hemisphere, especially given that Americans are free to travel to other communist countries if they obtain a visa, including China, Vietnam, and North Korea.  Further, the embargo unfairly burdens and even harms the Cuban people.  Cubans are denied access to technology, medicine, affordable food, and other goods.  Because of the embargo, Cuba has access to less than 50% of the drugs on the world market. Bone cancer medical treatments and antiretroviral drugs for HIV/AIDS are not readily available in Cuba because many are commercialized under United States patents. The embargo has been successful in that it has impacted the Cuban economy, costing the country over $1 trillion in its five-decade history; however, it has not effectively ousted communist rule just 90 miles from Florida’s coast.

Now that the United States has reopened its embassy in Havana and Cuba has raised a flag outside its own embassy in Washington, D.C., negotiations for the resumption of full diplomatic relations can continue.  A major issue to be addressed is that of human rights violations of the Cuban people, which the 2014 Human Rights Watch report stated that Cuba “continues to repress individuals and groups who criticize the government or call for basic human rights” through detentions, travel restrictions, beatings, and forced exile. The Congressional Research Service reported that there are an estimated 65,000 to 70,000 prisoners incarcerated in Cuba as of May 2012, which is the second highest incarceration rate in the world. However, this incarceration rate is less than thirty-six of the states and the District of Columbia in the United States.

The United States’ efforts are aimed at promoting independence of the Cuban people and their rights to speak freely and peacefully assemble.  Cuba, in turn, wants the United States to return the illegally-held Guantanamo Bay, end the transmission of anti-Castro radio and television broadcasts, and compensate the country of Cuba for damages suffered as a result of the embargo. To begin the long process of restoring diplomatic relations, the United States has already removed Cuba from its list of state sponsors of terrorism; however, such full resolution will likely require many more discussions with many more compromises.

The question that arises is to what degree will reestablishing ties impact the ordinary lives of Cubans and Americans?  What will the future hold for these two countries?  Regardless of what happens going forward, in the words of one Cuban-American, “You can’t hold the future of Cuba hostage to what happened in the past.” For now, one can only speculate on how and to what extent establishment of full diplomatic relations will have on both countries.  Likely, the United States will forcefully encourage Cuba to adopt some form of a representative democracy under the guise of maintaining good business practices.  However, such a guise is simply that, given that the United States’ business relationship with China, a communist country, is only growing.