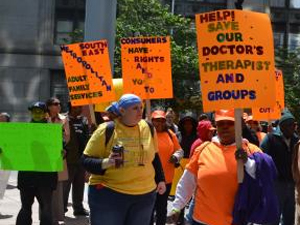 Four years ago Rahm Emanuel took office as the Mayor of Chicago in a city that was drowning financially. The over 600 million dollar deficit was understandably a main concern for Emanuel. His solution came in the form of a heavily reformed budget for the city. That proposal was met with approval, in fact, the 2012 Budget was passed in a unanimous 50-0 vote. In the hours leading up to the vote however, the support was not so clear cut. While council members understood that things had to change, there was dissent on who the burden would fall on. One of the areas hit the hardest, and thus one of the biggest points of contention, was mental health services.

Six of Chicagoland’s twelve mental health clinics were closed when Mayor Emanuel’s budget went into effect. Overall, roughly four and a half billion dollars were cut in mental health services in Chicago. The official aims of the 2012 clinic closures were to consolidate resources in order to provide adequate care to the mentally ill, while still catering to everyone in need. Overall, the city of Chicago cites the increased capacity, patient numbers, and general access as signs of the consolidations success. But many Chicago citizens argue that while overall the numbers may look good, individual communities have been abandoned. According to N’Dana Carter, a patient from South Side Chicago, it was the clinics in areas with high crime rates that were closed. Her weekly sessions have been reduced to monthly, and she said she frequently sees old patients from her center hanging out in parking lots.

This past March, shortly before his reelection, Emanuel met with community members who were still protesting the closures. One of the attendees, Debbie Delgado, lamented that reliable mental health care was no longer available to her.  Since the death of her son in 2006, Delgado has been attending regular therapy sessions to fight her depression. Due to the closures, however, the closest clinic is now an hour and a half commute. Along with extreme commute times, overcrowded facilities are another common complaint. But while Emanuel listened to the complaints, he also emphasized that patients like Delgado were in the minority. According to governmental reports, 85% of clients were still receiving help from the six remaining clinics. Additionally, since the closures in 2012 the City has been able to increase investments into mental health services.

While there is still dissent on the effects of the closures, last May brought undisputed good news for mental health patients in Chicago. Community Counseling Centers of Chicago, or C4, had recently announced its imminent closure.  However, a partnership with several other organizations in the Chicagoland area has allowed them to not only keep their doors open, but even expand their patient base. C4 patient Damian Phillips said he has depended on the organization for medication and guidance for his hallucinations for the past six years. Therese Burton has been receiving treatment from C4 for the last 24 years. She credits their support as the reason she is a successful artist and mother. For them and the 10,000 other people currently relying on C4, this is life changing news.

But despite those budget cuts that led to the mental health clinic closures three years ago, the city is still not out of the water. Chicago’s debt rating is below investment grade, which puts it right at home in Illinois, which has the lowest credit rating of any state. Illinois’ financial situation has been the subject of much debate lately, as the state is now operating without a budget. Discord between Governor Bruce Rauner and legislative leaders like House Speaker Michael Madigan have led up to an impasse. Thus, Illinois is now a month past the budget deadline with no official direction on how to spend money.

While frustrating for everyone, that impasse can have a particularly harsh impact on those who rely on state funds, such as mental health centers. Republicans have tried to put a reassuring spin on the situation, emphasizing that the lack of budget will not disrupt daily life and a solution will be reached. Democrats, however, have called attention to the thousands of individuals, such as those receiving mental health care, who have the most to lose from suspended funding. For the past few weeks state agencies have continued receiving money due to the ironically fortunate fact that the state was behind on paying bills. However, a recent attempt to pass a month-long stopgap budget to ensure that state services like mental health treatment continue to be funded was voted down in the House. The need for a more long-term solution is rising.

But while no budget means a potential loss of funds, the alternative will bring setbacks as well. Last June Governor Rauner announced that his administration intends to reduce the number of people receiving State services. To make sure that no money is wasted on those who do not truly need help, they plan on increasing the threshold for determination of need criteria. That plan is worrisome to many elderly and mentally ill who are currently receiving treatment. If the baseline criteria are changed, many who are currently served by State programs will be forced to do without.

Yet another, potentially more alarming, problem facing the mentally ill population in Illinois is the correlation between mental illness and incarceration. According to one argument, cutting mental health clinics simply moved the financial burden from the City level to the counties. In place of adequate medical care, individuals suffering from mental illness are frequently ending up in prisons. In those cases the government ends up spending even more money than treatment would have cost.

Nowhere is that more apparent than in Cook County Jail. Many frequently refer to Cook County Jail as America’s largest mental health facility. That sobriquet is depressingly accurate considering conservative estimates posit one in three inmates have some form of mental illness. That rate is fifteen times higher than estimates from twenty years ago, and puts the jail’s mentally ill population at around three thousand. But more telling than that statistic is what is revealed when you look a little deeper. The vast majority of crimes that inmates were imprisoned for were not crimes of aggression, but of survival. Petty theft and breaking and entering often reflect a need for food and clothing or a place to sleep. Drug use is usually correlated with untreated mental illness, people attempting to keep emotions or sleep habits in check through self-medication. Jail officials explain that when people suffering from mental illness go without the care they need, it exacerbates symptoms. Outside of care facilities, those symptoms are construed as criminal behavior, turning the afflicted into criminals. In short, claimed one official, we have implemented a system of criminalizing mental illness.

That leads to a heady task for Tom Dart, the Cook County Sheriff. But from his induction in 2006, he has chosen to run it as the mental health facility it is. All new hires receive advanced training on handling mental illness and are expected to fulfill caretaking roles beyond typical guard duties. This year Dart appointed a new executive director, Nneka Jones Tapia, a clinical psychologist who was previously in charge of mental health care in the jail. To help assure that everyone who passes through receives just treatment, Dart implemented a new stage in the processing process. Before they face the judge, recently arrested individuals are interviewed to detect any potential mental illnesses. To gain an idea of just how frequently those results are positive, you can look at the Cook County sheriff’s webpage. A daily updated graph depicts the percent of those arrested that day who reported mental illness or substance abuse.

But one of the most encouraging developments at Cook County Jail is the recent implementation of a Mental Health Transition Center. It focuses on teaching inmates to cope with their illness and preparing them to rejoin society outside the jail walls. The multi-phased program includes therapy, educational sessions, and job training. Overall, they are geared towards treating the larger, underlying problems that have inmates circling in and out of jail for years, and ultimately reduce the jail’s population.

The last few years have seen both steps forward and backward for the mental health population in Chicago. While the appalling state of our economic situation understandably limits the services the city can provide, there is ample room for improvement. The quick fix of cutting mental healthcare costs is not necessarily the best path, since hospital and prison costs often rise to balance it back out. We need to fundamentally fix the mistreatment surrounding mental health. By treating the underlying causes, not the effects, we can ultimately reduce costs, and more importantly, better serve the citizens of the city.