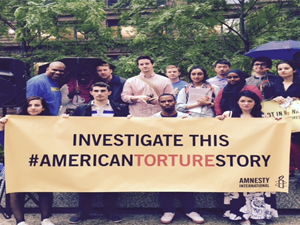 As June ushered in rising temperatures, the month also brought about focus to a unique and controversial topic: torture. June was Torture Awareness Month and in light of this, Chicagoland held major events to advocate and encourage an end to its use in any form and on any governmental level. Amnesty International, the world’s largest grassroots human rights organization, hosted a rally on Friday, June 26 at Federal Plaza, which brought together individuals to celebrate recent victories in the fight against torture’s use and created an open space to highlight different narratives of torture, both international and domestic.

The United Nations General Assembly defines “torture” as an:

[A]ct by which severe pain or suffering, whether physical or mental, is intentionally inflicted on a person for such purposes as obtaining from him or a third person information or a confession, punishing him for an act he or a third person has committed or is suspected of having committed, or intimidating or coercing him or a third person, or for any reason based on discrimination of any kind, when such pain or suffering is inflicted by or at the instigation of or with the consent or acquiescence of a public official or other person acting in an official capacity.

Though the United States, as a signatory to the UN’s charter, has committed to abiding by international conventions regarding torture, controversy still exists. The definition calls into question the coercive interrogation methods used by the CIA under the Bush administration and the program’s continuation by President Obama. The issue’s history draws debate largely upon partisan lines with national security often used as justification. However, after the publishing of the Senate Intelligence Committee Report on Torture earlier this year, the debate has shifted away from political allegiances and forced individuals to reexamine the issue, specifically in our own backyard.

Here in Chicago, we have our own troubling history with the use of torture. In 1990, a Chicago Reader article by John Conroy shed light on the actions of Chicago Police Department detective and commander Jon Burge. The article alleged that beginning in 1972 Burge had been using torture techniques to acquire false confessions, primarily from men of color, under duress. One victim, Marcus Wiggins, who was 13 years old when Burge administered electric shock, recounted his experience in the testimony of his civil suit:

Since the publishing of the report, more than 100 of Burge’s victims have come forward to expose the treatment that they received. What ensued was a series of cover-up attempts by both those involved and those implicated as being aware, including former Mayor Richard M. Daley who had served as Cook County State’s Attorney for part of Burge’s tenure. In May of 2010 Burge was tried, though not for any accusations of torture as the statute of limitations had long expired. Instead, the case accused and convicted Burge of perjury and obstruction of justice resulting in a mere four-year sentence. Civil suits against Burge continue to be filed and a $5.5 million dollars reparations fund for victims of police torture was established by the City of Chicago. Yet money only achieves so much closure for the victims and Burge’s reputation remains notorious in the city.

On the federal level, Chicago’s connection to recent torture allegations are less directly visible yet existent nonetheless. As opposition to interrogation techniques post-9/11 drew popular and media ire, another former CPD detective Richard Zuley was noted for his involvement. Having become notorious for obtaining confessions and closing cases in Chicago, he entered into a special operations program at the Guantanamo Bay detention facility. His reputation preceding him and a commissioned Navy reserve officer, Zuley arrived with the intention of extracting information for the U.S. War on Terror by any means possible.

What ensued were a series of human rights violations with techniques befitting of the torture label perpetrated under the guise of national security necessity. Shackling to walls for extended periods of time were common, sometimes lasting for multiple days. One detainee, Mohamedou Ould Slahi described his experience with Zuley in a memoir published in serialized format by The Guardian this past year. In it he recounts savage beatings, death threats and sexual humiliation. Slahi continues to be held, just as numerous others, at Guantanamo having yet to be charged with a criminal offense.

I’ve never seen anyone stoop to those levels…. It’s unconscionable, from a perspective of a criminal prosecution – or an interrogation, for that matter.

Much information regarding Zuley’s time at Guantanamo and in Chicago remains classified despite Freedom of Information Act (FOIA) requests. While until now he has not been reprimanded in any way, Lathierial Boyd, a Chicago victim exonerated of his alleged crime, has filed a civil suit that remains ongoing. However, Zulley’s actions at Guantanamo yielded no response from government officials.

The enactment of torture undermines all American values affecting us at our very being. Under no circumstance can its use be tolerated or justified. National security should be amongst our country’s foremost priorities, yet those who advocate the use of torture in ensuring security do so upon a fallacy. In his response to viewing the Senate’s recent torture report, Sen. Chris Murphy (D-CT) noted, “Torture, covert wars, and illegal surveillance more often than not harm, not enhance, our national security.” As previously noted, the outrage was not limited to Democrats with Sen. Susan Collins (R-ME) stating, “[T]he report raises serious concerns about the CIA’s management of this detention and interrogation program and the treatment of certain detainees. Torture is wrong and fundamentally contrary to American values.” When acts of torture are passively accepted in spite of the liberty and freedoms for which we preach, America’s standing in the world is delegitimized.

As Fourth of July weekend approaches, celebrations invariably force us to contemplate what it means to be an American, the freedoms that we enjoy, and the collection of truths that we hold to be self-evident. When reflecting on the U.S. narrative, history echoes both tremendous achievements and misguided shortcomings. As President Obama suggested in his recent eulogy for the slain South Carolina State Senator Reverend Clementa Pinckney:

History can’t be a sword to justify injustice, or a shield against progress, but must be a manual for how to avoid repeating the mistakes of the past—how to break the cycle.

Recent Supreme Court rulings remind us that progress is still to be made and is often only realized after years of struggle. In light of our country’s celebration, we must remind ourselves that the fight against torture continues and necessitates this struggle if America is to live up to the aspirations set forth at its founding.

In Chicago, the International Day of Support for Survivors of Torture was endorsed by Amnesty International, Council on American Islamic Relations (CAIR) – Chicago, World Can’t Wait, and the Chicago Coalition to Shut Down Guantanamo.

International Day of Support for Survivors of Torture