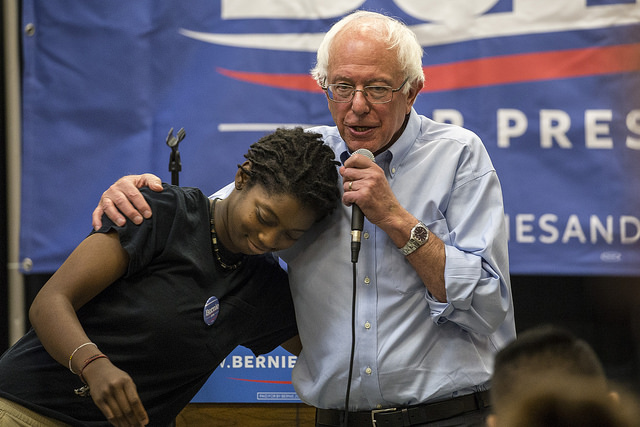 “Bernie Sanders,” shouted Marissa Johnson from the outdoor rally stage, “Welcome to Seattle.” However, Johnson herself was not welcomed by the Seattle crowd at Sanders’ August 8th rally when she and fellow Black Lives Matter protestor Mara Jacqueline Willaford took the stage and disrupted Sanders’ speech. The protestors’ actions along with the bewilderingly vitriolic response they elicited from Sanders supporters has started a conversation over the past week about the purpose of protest and the dynamics of race within progressive circles, namely within Bernie Sanders’ largely white, liberal, base.

While many on the Left have criticized the protestors’ tactics, many have come out in support of the strategy of pushing Senator Sanders on racial justice issues through protest because, for the most part, it has seemed to be working. The rapid shift in the Sanders’ camp in response to the protests has proven the efficacy of such disruptions, while the ugly, dismissive, and often racist response of Bernie’s defenders to them has proven their necessity.

The Seattle rally was not the first time that Bernie Sanders had been put on the spot by protestors championing racial justice.  On July 18th, Sanders’ speech at the Netroots Nation town hall in Phoenix, Arizona was interrupted by protestors who heckled both him and John O’Malley, with whom Sanders was sharing the stage. While Bernie let them speak, he was criticized after the fact for being dismissive of their remarks, and for failing to seize the moment and clarify his commitment to fighting systemic racism. Sanders supporters in the audience and online after the event staunchly criticized the protestors for targeting Sanders, a self-avowed socialist who had fought for civil rights in the 1960s. They said the protestors should have targeted Hillary Clinton or Republican candidates who are decidedly to the Right of Bernie on racial issues. In response, many supporters of the Black Lives Matter movement sarcastically turned this argument around on the Sanders camp with the hashtag #BernieSoBlack, which became a trending topic on July 19th.

By the time the disruption in Seattle occurred on August 8th, Bernie Sanders had done little publicly to assuage Black Lives Matter activists’ concerns, and Johnson and Willaford felt the need to force the candidate’s hand a little more. This time however, the two women took to the stage itself, and were thus met with even more hoots and hollers from the audience than they had at Netroots. Their tone was confrontational and their message was broad, and they forcibly drew the attention of those in attendance to the anniversary of Michael Brown’s death. Only a few attendees complied with their request for a moment of silence for the dead. The protest style was so divisive that even some on the Left came out in opposition to the two protestors’ tactics.

However, while detractors focused on the protest methods and the purpose of targeting a progressive candidate, it has become clear that the Black Lives Matter disruptions have been worthwhile. Since Netroots and Seattle, Bernie Sanders has significantly expanded his populist focus to include a fleshed out platform on racial justice. Just before the Seattle disruption, the Sanders campaign announced that they had hired Symone Sanders, a young Black woman who has been a supporter of #BlackLivesMatter and a longtime criminal justice advocate, to act as the campaign’s national press secretary. The Senator hired the younger Sanders on the spot after consulting with her about the principles of the Black Lives Matter movement. In addition, and perhaps most importantly, a new section appeared on Bernie Sanders’ website titled ‘Racial Justice,’ which includes a detailed platform that breaks down his policies into responses to physical violence, political violence, and economic violence against African-Americans. Sanders has also incorporated language from the Black Lives Matter movement into his stump speeches and, on occasion, even opened his rallies with remarks about anti-Black police violence. The reasoning behind targeting Sanders, a socialist, is thus self-evident when compared to the response candidates on the opposite side of the political spectrum have given activists. Jeb Bush walked out of an event when confronted by Black Lives Matter protestors on August 12th. Shouts of ‘white lives matter’ from the audience marred the effort further.

Bernie Sanders swift turnaround is proof that rather than demonizing these protestors, he would much rather incorporate their message and their movement into his broad progressive campaign, which already prides itself on its grassroots organizing style.  Politically speaking, he has always had a problem with attracting African-Americans and Latinos to his camp, and has probably begun to realize that a platform purely focused on economic liberation may not be enough. By aligning himself more closely with the Black Lives Matter movement, Sanders might be able to finally make deep inroads with these key demographics. While Marissa Johnson stated in an MSNBC interview that she does not support any major political candidate for office this election cycle, other Black Lives Matter activists like DeRay Mckesson have come forward since August 8th with the intention of working with Sanders and advising his racial justice platform.

Despite these very real positive developments, Bernie Sanders supporters have responded to the Black Lives Matter activists and this series of protests with vitriol unbecoming of self-described progressives. Boos and angry shouts pelted Johnson and Willaford on August 8th, and the pair’s comments about Sanders’ audience further inflamed passions. After Johnson accused the attendees of being ‘white supremacist liberals,’ a woman in the audience yelled, enraged, “How dare you call me a racist?!” The disruption in Seattle, more than anything else, disrupted the bubble of white comfort in which many among Sanders’ base have lived their whole lives, believing that as progressive, modern, individuals, they were exempt from the history of racism in America and were not accountable for any part of it. Being called ‘racist,’ a word white liberals reserved for bullish Southern conservatives, went against every part of the identity that they had worked so hard to construct.  Some, in an effort to deny the validity of a protest against a candidate they saw as already a rebel, argued that Johnson and Willaford were not actually Black Lives Matter protestors, but rather lone wolves, or even covert right-wing operatives intent on derailing the Sanders campaign. They could not possibly accept that a radical Leftist movement for racial justice would legitimately target their candidate for his shortcomings.

However, shortcomings Bernie Sanders does indeed have, and his supporters would do well to acknowledge them and welcome efforts at improving his campaign. Although it was meant to agitate, the Seattle protest, like a hacker seeking to expose flaws within a computer system for repair, has allowed the Sanders campaign to grow and modernize its message. In addition, for better or for worse, the hypocrisy and sheltered nature of white Bernie supporters has been exposed. In seeking to push Sanders’ campaign to the Left, Johnson and Willaford were able to demystify the myth of the white liberal saint.