While no one can argue that the mental health care scene in Chicago is bright, it would be a lot worse off without the help of organizations like Thresholds. Since 1959, Thresholds has functioned as a nonprofit serving the greater Chicago area. Thousands of individuals struggling with mental illness have been able to find housing, employment, and recovery through Thresholds services. But for every client that Thresholds has been able to help, there are countless more who are unable to access services that stabilize their illness. Their already inadequate funds are dropping due to recent budget cuts. 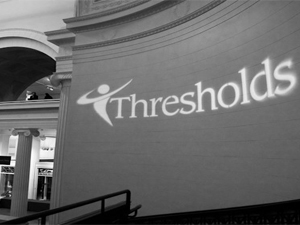 Thresholds is the largest provider of mental health services focused on persons with a diagnosis of severe and persistent mental illness in Illinois. Thresholds refers to clients as “members” to emphasize the self-determination of each individual to join the organization. Members voluntarily enter the intake process without court orders or mandates requiring their treatment. It also lessens the clinician/patient hierarchy common in mental and general health care.  Common patient illnesses include schizophrenia and bipolar disorder. Many members haven’t had treatment for years; many are homeless; many are in and out of the justice system or various hospitals. Thresholds provides sustained community-based treatment, often for the lifetime of their members. Currently they serve over 7,000 members out in the community.

Heather O’Donnell, Vice President of Public Policy and Advocacy at Thresholds, was interviewed to provide a review of the impact of current state budget conditions on Thresholds services.

In general, mental health services, which are funded primarily by the state, are terribly underfunded.  As a result, the state is currently operating under two major consent decree settlements, Williams and Colbert. These decrees arose after federal lawsuits were filed against the state for violating the civil rights of individuals living with mental illness who, with access to the right treatment are capable of living independently, yet were being forced to into nursing homes because of inadequate investment in treatment services. The decrees led to recent increases in funding to move individuals out of nursing homes, paying for their transitional needs and the staff necessary for intensive treatment. However, due to Governor Rauner’s proposed budget cuts and the budget impasse, vital funds that support treatment services have stopped.  Without the funding for these services, Thresholds cannot fully implement the consent decrees.

During the recent years of 2009-2011, lawmakers cut mental health funding by over $113 million. This resulted in a 19% spike in psychiatric hospitalizations as people with serious mental illnesses lost treatment, costing the state over $131 million.  The State in general hasn’t invested resources in the right places, which means spending more taxpayer dollars than is necessary. Governor Rauner’s proposed budget would cut another $82 million from mental health services.

Many critical aspects of care that are not covered by Medicaid, like supportive housing, are funded by state dollars, which are being cut. In terms of the current budget impasse, one of the biggest cuts affecting Thresholds is that typically dollars for psychiatry are provided by Medicaid. Since Medicaid doesn’t even cover half the total costs for these services, Thresholds gets state grants, mainly Psychiatry Leadership Grants to make up the shortfall. Because of the budget impasse, Thresholds has not gotten grants for psychiatry, which are essential in treating a serious mental illness.  In addition, for the full implementation of the Williams and Colbert decrees discussed above, grants are absolutely critical.

As a result of these funding cuts, Thresholds had to terminate a hospital diversion program that diverted people from unnecessary hospitalization and connected them to appropriate treatment programs in the community. This program served over 1200 people a year. Now these people will cycle through multiple hospitalizations without getting the real care they need, costing the state far more. No staff was layed off, but the program itself was terminated.

The Medicaid population living with serious mental illnesses is one of the most expensive populations for health care.  Yet, the evidence overwhelmingly shows that treatment works and is far less expensive than allowing this population to churn through multiple hospitalizations. The most intensive level of service a member could be on costs $10,432 and is called Assertive Community Treatment. Compare this cost to one ER visit combined with just one hospitalization at about $6,000.  It is not uncommon for someone with an untreated serious mental illness to have numerous hospitalizations throughout a year.  It makes far more sense to invest in treatment services.

“Without treatment more people suffer and taxpayers’ money is wasted. By not coming to a budget agreement, elected officials are wasting money and causing suffering. Mental illnesses are very serious diseases, real diseases. We don’t tell people with cancer that they can’t get treatment until they are homeless. But that’s how we treat mental illness.”

Threshold’s funding is a combination of federal and state sources. Medicaid services are both state and federal, but reimbursement does not cover the actual cost of services. Grant funds from the state make up the shortfall and cover critical non-Medicaid service supported housing and employment programs that enable recovery and the ability to live a productive life. The Governor’s proposed cuts are for state-only services, but those services are integral to treatment. State dollars are used for required psychiatry services. If the system was thoughtfully constructed, many state-funded services could receive federal matching funds through Medicaid. O’Donnell described the short-term thinking driving these budget cuts:

“Since we are in a financial crisis our government needs to be smart in how they invest, cutting mental health treatments is not smart; it just creates more of a financial burden in the long run.”

Thresholds has never been able to meet the need in the community which is why 20 percent of those in prison have mental illness; so many are institutionalized in nursing homes or are part of the homeless population. Now with the Affordable Care Act, more people have healthcare coverage and there is increased demand. But there is not enough capacity at Thresholds or with other providers to expand to meet that need. Even though many have coverage now, the existing reimbursement rates and grants don’t enable providers like Thresholds to meet the need.

The biggest challenge facing Thresholds is the uncertainty of the state budget impasse, as well as the proposed cuts. Thresholds has already been forced to tap lines of credit and is now paying interest on this debt. The organization raises a lot of private money through donors, but now some of those resources are being used for interest instead of for member care. The longer that the lawmakers can’t come to an agreement, the more money is lost. Thresholds is lucky to have reserves and lines of credit to work with during this impasse, but they are a large organization and many others offering mental health services are smaller and not as well-funded. O’Donnell stressed the lack of responsibility politicians are demonstrating in the current budget conflict:

It is unconscionable that elected officials are not stepping to the plate. Patients are losing services, and people are losing jobs.

The experience of Thresholds is a microcosm of what is happening to mental health and other social services agencies across the state. The state budget impasse and threatened cuts to social services in Governor Rauner’s proposed budget are directly impacting the lives of some of the most vulnerable members of the society. When a very strongly funded, successful, cost-effective provider of mental health services like Thresholds is being adversely affected, one has to question the rationality as well as the humanity behind the budget impasse and the Governor’s budget priorities.