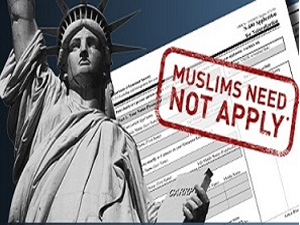 As many professional fields diversify and seek to better represent the changing face of the United States, many remain alarmingly homogenous. One of these areas happens to be diplomacy, a field I hope to enter post-graduation. In the international arena, it is crucial that the representatives of the U.S accurately reflect our differing races, ethnicities, and religions, among other identifying characteristics. In our post 9/11 world, one with rampant worldwide Islamophobia, it is particularly important to include American Muslims in this field – not as token minority officials – but as valued contributing members to American diplomacy.

However, the widespread bigotry demonstrated by elected officials makes this very difficult. Distrust of Islam is not uncommon in the U.S., leading many to have a negative view of Muslims. Despite this, perceptions are changing, especially for young people. A new Gallup poll even suggests approximately 60% of Americans would be willing to vote for a well-qualified Muslim presidential candidate. If more than half of Americans believe that loyalty to the United States is not hindered by religious affiliation, there is no excuse for politicians to continue promoting an illogical fear of incorporating Muslims into our government.

Adverse perspectives on a faith and its adherents are particularly harmful when elected and public officials have large platforms and audiences. Far too often, these negative attitudes are validated by domestic and international attacks committed in the name of Islam. They also highlight the differing experiences of American Muslims compared to other minority and marginalized groups.

The 2012 presidential run witnessed rampant Islamophobic comments made by candidates, including Herman Cain and former House Speaker Newt Gingrich. Cain said he wouldn’t be comfortable with appointing a Muslim to his cabinet, in the name of national security. Gingrich claimed that Muslims were capable of infiltrating government, and even went as far as comparing them to Nazis and Communists. To many conservatives, American Muslims are indistinguishable from radical Islamists, and should therefore be treated as such.

While the 2012 presidential candidates were far more explicit in their fear of Muslims in government, the 2016 Republican presidential candidates have also been extremely inflammatory in their sentiment towards American Muslims as a whole. Former Governor of Arkansas Mike Huckabee has made it clear that there is a major issue with President Obama’s defense of Muslims in the U.S. On an interview with Fox and Friends, he claimed that “[t]he one group of people that can know they have [Obama’s] undying, unfailing support would be the Muslim community. It doesn’t matter whether it’s the radical Muslim community or the more moderate Muslim community”. Huckabee was speaking in reference to the President’s statements at the February National Prayer Breakfast, where the President acknowledged that “Christians shouldn’t get on a ‘high horse’ about violence in the name of religion, noting that Christians used their faith to justify Jim Crow laws and slavery”. In addition to his suggestion that radical Islamists and American Muslims are indistinguishable, he voices his disapproval at the leader of the nation for defending a highly persecuted minority group. If Obama were to passionately defend another minority group, he would be met with praise for upholding the values of our Constitution.  However, in the case of American Muslims, it is for some reason outrageous for a President to utilize his influence to promote the equal treatment for all citizens.

Huckabee however is not the only 2016 candidate dedicated to creating fear of Muslims influencing politicians and government. Several other conservatives including former Pennsylvania Senator Rick Santorum have supported the irrational fear that sharia law could override American federal and state laws. Santorum has previously stated that sharia “is incompatible with American jurisprudence and our Constitution.” His unnecessary dichotomization of American and Islamic law is another attempt to alienate the Muslim community and limit their participation in government. While the democratic candidates have not been nearly as Islamophobic in their statements or actions, they also have not directly criticized their Republican counterparts for their discriminatory behavior toward Muslims in this country.

Even at the local level, skepticism and suspicion of Muslims are evident. In response to Texas Muslim Capitol Day, “an event that aims at engaging Texas’ Muslim community in discussions about civil rights, democracy and governance”, Texas State Representative Molly White demanded that “representatives from the Muslim community renounce Islamic terrorist groups and publicly announce allegiance to America and our laws.” Muslim Americans who sought to utilize this event as a way to more actively participate in local government were hindered from doing so merely for exercising their first amendment right to freedom of religion. It is simply un-American to “make discriminatory demands of Muslim-Americans that [are] not required of others.”

Public officials openly demonstrating their Islamophobic views is what normalizes the marginalization of American Muslims. However, not all right-wingers support this theory of American-Islamic incompatibility. Former Secretary of State Colin Powell criticized those who questioned President Obama’s faith affiliation in his first presidential run. According to him, the right answer to the question of whether or not Obama has ties to Islam is not that he is a devout Christian but, instead, “What if he is? Is there something wrong with being a Muslim in this country?” Just as there is no racial or gender qualification for the U.S presidency, nor for any other government position, adherence to any particular faith cannot be used as a measure of eligibility for any job.

American Muslims have origins from across the globe, and are also one of the most highly educated minority groups. Our diverse experiences and backgrounds have positive impacts in our work, as we can contribute to a greater appreciation of other cultures. This understanding of different perspectives allows one to be sensitive to complex issues, and negotiate – all key tools for diplomacy and for working in government domestically. An Islamophobic narrative is being promoted at the cost of utilizing the unique skills and values that American Muslim diplomats have to offer.

Even as there are no de jure roadblocks for American Muslims seeking employment in diplomatic or governmental positions, their mere association with Islam can make critics, both domestic and foreign, question their loyalty to American values. When former advisor to President Obama, Dalia Mogahed, was interviewed by Egyptian newspaper Al Masry al Youm, she was asked to rank her loyalty to her faith, to the United States, and to her native country of Egypt. Although she confidently responded that her first and foremost loyalty was to America, it does not make the question itself any less inappropriate. The message this question promotes is that her commitment to different aspects of her life were somehow mutually exclusive, and could affect the quality of her job performance as advisor to the White House Office of Faith-Based and Neighborhood Partnerships. These questions are not uncommon, and are only normalized because Americans are under the false impression that Muslims cannot separate their work from their religion, despite being citizens of a country that values this very idea of separation of church and state.

While Muslim Americans remain a heavily targeted minority group, their presence in the U.S is only growing, and their positive impact on American society is becoming more significant. American Muslims are this nation’s doctors and professors, cab drivers and school teachers, food service employees and small business owners. If we can be trusted in these fields – every day jobs that make the greatness of this country possible – we also belong in the House and Senate, in national security and military intelligence, as well as in the State Department and as representatives in international organizations. Rather than unfairly questioning the loyalty that is not doubted of other groups, it is time that Americans recognize the actual qualifications, contributions, and potential of their fellow citizens.