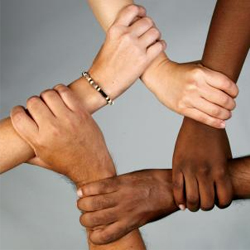 Here’s the thing: my skin tone isn’t very dark. But I was led to believe it was.

I’m not ashamed to be considered dark or different, or that no one corrected me. I’m ashamed of believing myself to be a lesser person because of it. Regardless of how I actually look and where I get my skin color, my culture says I’m beneath a white person. Coupled with friends who believed in the same mentality and others who didn’t know there were colors besides black and white, I trapped myself into that mindset.

Perhaps what bothers me the most about this epiphany is how my educated and well-off family couldn’t escape these archaic views. For instance, my parents were born and raised in Pakistan. Our families are big, mostly wealthy, and educated. My grandmother liked to brag that she had a Jacuzzi in the 1920s, a personal butler, and went to a British school in India. My grandparents on both sides were well-known in their communities.

According to my dad and some long research, our families are descended from Arabs. When they moved to the Indus Valley – the date is unknown – we don’t know if they married to other natives or stayed within their own. Still, our families don’t look “Indian”. We look like a mixture, which we are.

It’s why our skin tones vary within our family. Those who married “darker” Desis (people from Pakistan, India, Sri Lanka and Bangladesh) would have darker children. Those who married Desis with lighter skin tones would naturally have lighter skinned children. Regardless, our facial features look a little different and most of my family is pretty tall, which is unusual of “true” Desi families.

If all of this sounds elitist and racist, it is. It doesn’t matter. It has no effect on who I am as a person, where I come from, and who I will be. My family’s history doesn’t determine anything aside from giving me something to ask my father questions about.

Yet, to some degree it does. Even after being educated, my family still thinks this way. They’re not supposed to but they do. The culture my parents, aunts, and uncles grew up in shaped them as much as it shapes me. I know to immediately give up my seat when an elder comes by and insist as much as I can; otherwise it won’t look like a sincere effort. I know how to make the best tea in the world because bad tea can make or break a gathering. I know this because it’s a part of my culture, too.

It’s ironic that the general population in the Indian subcontinent is not, in fact, white, yet there are people who will do anything to search for those who are.  It’s even more ironic that racism has been a part of this culture for centuries – through the Aryans and the introduction of the caste system, to the British overstepping their rule.  For Desi men and women to assume white is the natural order only means they continue to perpetrate racism by their own hand, and I hate it.

I’ve always been a big proponent of telling a person to keep quiet when they make racist comments, but there’s a difference when racism is subtle, like a magician’s trick.  It’s when you ignore someone who’s slightly darker than you. It’s passing up a woman as your future daughter-in-law because she’s not light enough. It’s telling a little girl to come back inside so she won’t get too dark from the sunlight. It’s when a little girl is made fun of at school for using a tan crayon to color a picture of her, then immediately colors over it with a darker brown to make it realistic.

So I, a loud-mouthed “dark brown” girl, chose to become the loud-mouthed dark brown girl who would make jokes at the expense of my skin tone. I chose to give my fellow Art class students a reference guide on how to paint the ancient Egyptians, to which my teacher agreed, even though I’m nowhere near being Egyptian. My classmates – both white and black – never corrected me when I was in school, and reaffirmed that I was a dark brown girl. As I got older, I picked makeup that was one or two shades darker, and it didn’t help that the makeup counter employees would choose it for me. My family didn’t correct me when I brought up my skin tone, too; they would simply ask if I had been out in the sun for long.

What’s more is how my friends never corrected me. Growing up in a mostly white town, I had a lot of friends who had no idea where Pakistan was. However, I had plenty of white, black, Arab and Desi friends as I grew up. They all had different ranges of skin tones and unique personalities. But perhaps what was most odd was my Desi friends believed I was dark as well. My Desi friends ranged from fairly white to fairly dark, but no one told me “No Amena, you’re just tan.” No one told me my makeup was too dark for my skin because they believed it matched.

They believed I was dark and I did too. And I don’t know whom I should blame.

For all the times I’ve argued to my parents, aunties and uncles about race, their mindset ended up infringing on who I am. Who I can be. I had trained myself to think I was darker than I really am because I allowed myself to.  My experiences growing up solidified the darkness, or lack thereof, of my skin. I think what’s worse is having absolutely no one tell me otherwise. They were supposed to be my evidence. They were supposed to give me a second opinion but it never happened. It goes to show that despite my facial features and family’s history – despite how I actually looked – I was darker than the expected norm. But what is the norm?

For some they see no in-between.  The world is one dimensional, black and white, light and dark, except there are a large number of us who fall in the middle of the spectrum. As with everything, there are nuances in skin color, and being simply tan is one of them.  There are a thousands shades of green, blue, red, but when it comes to skin color there are only two. Why do we allow ourselves to strip one another the choice of seeing and understanding who we are? I’m not invisible and I’m definitely not beneath anyone.

I exist, as does my skin color.