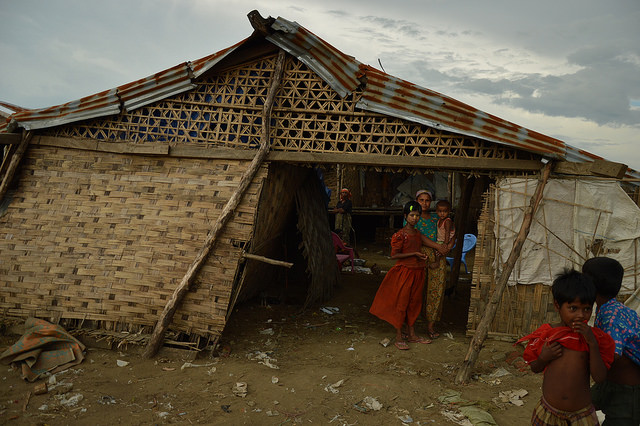 Although many international efforts to combat human rights violations have proved successful in certain circumstances, some of the greatest acts against a collective group of individuals have gone unchecked. This is the story of the Rohingya Muslims of Myanmar (formerly known as Burma, the official name changed in 1988). The Rohingya people have been fleeing Myanmar for almost 30 years because of the intense persecution they face at home, a place that Rohingyas have inhabited as early as 1799. The alleged newly-democratic government denies all Rohingya citizenship, claiming that they are actually illegal Bengali immigrants who have entered their nation in the past half-decade.  This dynamic between one of the largest Muslim minorities of Myanmar and the government has bred for an “apartheid-like” state, in which basic democratic liberties such as healthcare and employment have been denied to the Rohingya. By enclosing “the most oppressed people on Earth” into the Rakhine state of Myanmar with almost no resources for the basic sustenance of life, hundreds of thousands of Rohingya Muslims have fled their native country in hopes for asylum in nations such as Thailand and Malaysia, who largely disregard their plight.

Myanmar’s political and social dysfunction is not newfound, however, as their autonomy only traces back five decades. Being tossed around by Britain and Japan for almost a hundred years, Myanmar’s independence story is not an anomaly amidst that of the many British colonies. Myanmar has been plagued with the perils of socioeconomic ruin and political disarray quickly after gaining self-governance in 1948. These national problems were exacerbated by a merciless junta, which followed a small democratic period in Burma between 1948 and 1962. The junta was born out of General Ne Win’s militant constitution that bred economic isolationist policies and ethnic stratification, all in attempts to maintain the “Burmese Way to Socialism.” This was an ideology that became the socialist model for the newly created nation. Ironically, the documents designing these monetary policies, which were released years later, describe Burma’s socialist economy in order to prevent the exploitation of man, “irrespective of race or religion, and be emancipated from all social evils and set free from anxieties over food, clothing and shelter”. Retrospectively, the regime’s hopeful sentiments towards a communal nation included all but the Rohingya. The junta preyed on ethnic and religious minorities, specifically suspected illegal immigrants from Bangladesh.

The regime began targeting the Rohingya in the 1980s, passing the 1982 Citizenship Law. This law declared that citizens are only those who belong to one of the ten national races of Burma as well those able to trace back their lineage in Burma prior to 1823 (the beginning of British control of the Arakan state) . Despite the Rohingya inhabiting the Burmese territory much earlier than what the legislation declares lawful, the junta stripped them of their citizenship because they did not qualify as one of the national races. This action ultimately made the Rohingya stateless criminals in their own homeland. The law essentially legitimized any violent behavior against the Rohingya, as well as altered institutional standards in a way that would erase any employment or education opportunities. Gradually, rising numbers of Rohingya began fleeing the country in 1991, totaling near 260,000 by March of 1992.

Almost thirty years after this first mass exodus of Rohingya, newly-dubbed Myanmar exited its virtually 60-year international isolation, opening both economic and social outlets to the rest of the world. Domestically, the first general election since independence took place in 2010, seen to many as a fraudulent attempt towards democracy as the winner was a previous prime minister and general during the junta. Although Myanmar is no longer the pariah state it once was, it still shares the identical negative values regarding human rights and civil liberties as it did under the regime created 50 years prior. 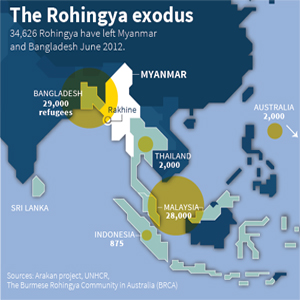 Despite the conflict being coined as “ethnic cleansing”, the mass attacks made against the Rohingya within Myanmar rely equally upon faith as they do ethnicity. During the alleged democratic government’s rise to power in 2010, the 969 Buddhist Movement gained momentum across the nation. The militant movement’s most foreboding goal was to eliminate the Islamic faith from all of Myanmar. With Ashin Warathu as the face of 969, Rohingya Muslims are persecuted daily because of their faith—facing mass killings, destruction of their homes and mosques, as well as systematic relocation to the treacherous Rakhine state overflowing with refugee camp style homes. Although proponents of 969 claim that Muslims have infiltrated their communities—raping and murdering Buddhists—leading to the claimed systematic decay of Buddhist life collectively, there is little to no evidence of these supposed events. In reality, Rohingya Muslims have been displaced in mass numbers, losing any form of identity and state protection under the heavily Buddhist government.

The most daunting component of surviving as a Rohingya is not limited simply within the borders of Myanmar, however, International attention about the plight has only recently grown because regional nations, such as Thailand and Malaysia, simply do not know how to respond to the massive numbers of Rohingya seeking refuge on their land. As thousands of Rohingya enter the Andaman Sea hoping to escape the treacherous conditions in the Rakhine state back home, Myanmar’s regional neighbors refuse to accept the “boat people.”  Not only are the ships essentially stuck at sea with neither Myanmar or its neighboring countries willing to accept them, but the conditions in which Rohingya are lured onto the boats are equally as unnerving. Rohingya are essentially promised a safe trip across the sea by traffickers who then kidnap the men, women, and children, and smuggle them for both sex and slave trafficking purposes…left to starve eventually. Human Rights Watch reports that mass graves of Rohingya Muslims have been found in both Malaysia and Thailand in what have been called abandoned trafficking camps. This raises the question if there is any country that will accept and be livable for the Rohingya.

Despite the Rohingya being one of the largest displaced communities in human history, the world’s most influential leaders have failed to express any outcry to the Burmese government. Myanmar’s very own Nobel laureate Aung San Suu Kyi who is seen for many Burmese as the symbol of democratic reform in the country has remained silent on the Rohingya conflict. Her silence is an example of how political calculation has trumped humanitarian efforts even amongst the most respected individuals.  The Dalai Lama has even urged Aung San to utilize her vastly influential role to advocate for the Rohingya people.

Although international law is something which may never be effectively implemented, and questions regarding accountability amongst nations may never be answered, efforts must never cease to be made. The Rohingya people have become aliens not only in their own country, but in our world as a whole, in a way that is formulated to eliminate them almost indefinitely.