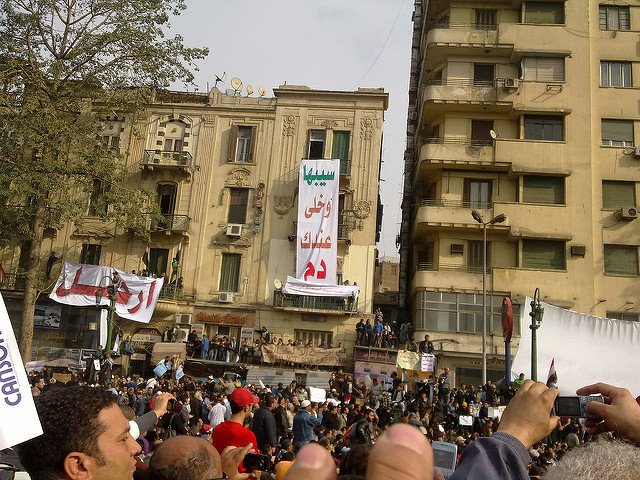 Facebook
Twitter
Pinterest
WhatsApp
Email
Print
Egyptians awoke on August 6 to a day of celebration. People from across the country paraded through the streets with Egyptian flags as President Abdel Fattah al-Sisi announced an $8 billion expansion of the Suez Canal. The national holiday centered on an elaborate inauguration that was hosted in the town of Ismailia. Trumpeters dressed as pharaohs stood in formation as al-Sisi traveled through the canal in a yacht with foreign leaders and other distinguished guests. Fighter jets and helicopters ceremoniously flew over the leader, who dressed for the occasion in full military uniform.

This celebration came only four days after U.S. Secretary of State John Kerry visited Egypt to discuss counter-terrorism in the region. The talks, which were seen as a way to continue rebuilding relations between the Obama administration and President al-Sisi, focused mainly on developments in Sinai. Among the topics discussed, Kerry stressed the importance of upholding human rights and developing trust between the people and the government. This has recently been a major concern for the Obama administration due to its decision to resume military aid to Egypt in late March. As the self-proclaimed Islamic State continues to occupy territory in Iraq and Syria and gain supporters across the Middle East, the U.S. has sought to strengthen its relations with Egypt and other allies in the region.

Egypt has faced a long history of human rights violations. Eight days after Anwar Sadat was assassinated in 1981, Hosni Mubarak rose from his position as vice president to become the president of Egypt. He immediately declared a state of emergency that would last for the entirety of his thirty-year rule. Widespread election fraud would come to haunt Mubarak’s years in office as his party, the National Democratic Party, dominated the parliament and essentially crushed all opposition. This, Mubarak’s broken promise to not serve past two terms, and his extensive use of torture all culminated in the 2011 revolution. Within the larger context of the Arab Spring came the eventual rise of Mohamed Morsi and the Freedom and Justice Party.

Unfortunately in the opinion of many Egyptians, Morsi would not lead the country in a direction all that different from Mubarak. More liberal Egyptians, leftists, and a large portion of the youth became disillusioned with the new leader as the Muslim Brotherhood rose to a position of prominence. Morsi selected members of the Brotherhood for key government offices and supported economic policies that favored the Brotherhood over ordinary Egyptians. He also quickly fell under pressure due to accusations that he tried to silence negative media. His time as president would not last long, and on July 3, 2013, General Abdel Fattah al-Sisi led a coup that removed Morsi from power.

Much of al-Sisi’s past is vague. It is known that during the outbreak of the 2011 revolution, he served as the commander of the northern army district. After Mubarak was removed from power, he rose to become the head of military intelligence, was named commander-in-chief of the armed forces, and then served as the defense minister under Morsi’s regime. Although he initially claimed he would not attempt to replace Morsi, al-Sisi responded to the call of many Egyptians and resigned from the military to run for President. He easily beat his one opponent, Hamdeen Sabahi, by receiving approximately 97% of the vote.

Before the coup, there was speculation that al-Sisi was a member of the Muslim Brotherhood. This was mainly due to his appointment by Morsi and the fact that his wife chose to wear a full face veil. However, these claims were most likely false as al-Sisi’s regime went on to outlaw the Muslim Brotherhood and brutally persecute its followers. Estimates from March 2014 suggest that 2,500 Egyptians were killed after the coup, more than 17,000 were wounded, and more than 16,000 were arrested. A large number of those arrested were members of the Brotherhood, which include leader Mohammed Badie, as well as Mohamed Morsi. At this time, Badie and Morsi have both been sentenced to death along with hundreds of other Brotherhood members.

Kerry’s concerns at the recent meeting come from both these human rights violations, as well as numerous others that have been documented since al-Sisi took office. According to a Human Rights Watch report on Egypt’s abuses in 2014:

Over the past year, al-Sisi and his cabinet, governing by decree in the absence of an elected parliament, have provided near total impunity for security force abuses and issued a raft of laws that severely curtailed civil and political rights, effectively erasing the human rights gains of the 2011 uprising that ousted the longtime ruler Hosni Mubarak.

The report goes on to reveal that no member of the security forces has been tried or held accountable in any way for the killing of protesters. Other major abuses under al-Sisi’s regime include restrictions to free speech, evictions in Sinai, as well as mass arrests, incarcerations, sentencing, and executions.
More recently, the passage of new legislation has served as a warning of a dismal future. On August 17, President al-Sisi approved counter-terrorism laws that establish special courts and provide more protection for military and police officers who use force. In addition, these laws impose the death penalty on those found guilty of establishing or leading a terrorist organization. According to a warning made by Amnesty International, this legislation gives the government powers that are normally reserved for a state of emergency. This places al-Sisi in a very similar position to Mubarak, who ruled exclusively in a state of emergency.

Daily life in Egypt is also becoming increasingly difficult as strict government policies attempt to erase all signs of the revolution. In Cairo, for example, it has been noted that nights have become uncomfortably quiet and empty. Buildings damaged in protests and clashes with the security forces have been repainted and now blend in with their surroundings. Even Tahrir Square, the former center of the revolution, has been reduced to an open piece of land surrounded by parked cars that is only open for pro-government rallies. Beside all of these struggles, Egyptians have done their best to adapt and carry on with their everyday lives.

August 6 marked a strange day for Egyptians. Four years of revolution and transition has led them directly back to where they started. In some cases their situation has become even worse, and yet they continued to celebrate and wave flags in the streets as their leader led a grand military parade through the Suez Canal.

It is unclear what the future will hold for Egyptians, but it is evident that many have accepted the current situation. Next January will mark the five-year anniversary of the revolution and the beginning of a new era for Egyptians. However, it seems that for now the revolution has run its course.