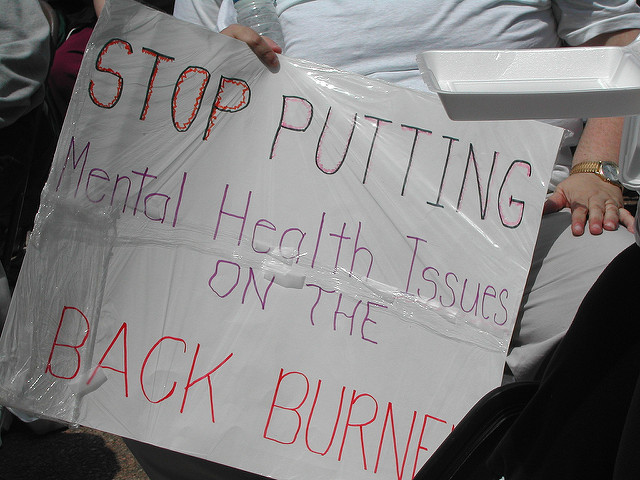 Undoubtedly, discussion of issues pertaining to mental health has reached a forefront—inching into the everyday narrative of policy reform—placing a higher demand on reshaping the social, political, and religious considerations applied towards health and the institutions that govern its policies. The increase in discussion comes at a critical moment in history as rates of illness keep increasing ever so rapidly. The Centers for Disease Control (CDC) latest reporting in 2011 indicated that eleven percent of the US population over the age of 12 is on antidepressant medication, a glaring testament to the overall epidemic and swiftly growing societal emphasis, or lack thereof, towards mental health. One group of individuals feeling this shift—often in a polarizing way—is the Muslim community.

The exponentially growing rate of mental health illnesses in the American population has reached levels never seen before, where one in five American adults suffers from some form of mental illness. Health professionals consider this number to be universal across the board; however, different cultures traditionally deal with the topic in different ways. In the Muslim community, people who suffer from different mental health conditions (i.e. depression, bipolar disorder or schizophrenia) often go without counseling or any treatment due to both religious stigma and a lack of infrastructure and support. Given this, many health experts have been left wondering: what, if anything, can be done to further a greater tolerance in the Muslim community for those suffering from different mental health conditions?

Researchers Amal Killawi and Aasim Padela, authors of “Using CBPR for Health Research in American Muslim Mosque Communities: Lessons Learned”, have tried to resolve this question by considering a new way to educate the Muslim community in this area. Through an integrated partnership among community members, organizational representatives, and researchers, in which all partners contribute a different perspective to the topic of mental health, Killawi and Padela may have found the answer: a concept known as community-based participatory research (CBPR).

Integrating education and social action, CBPR focuses on relationships between academic and community partners. CBPR’s principles include co-learning, mutual respect, and an emphasis on long-term agreements that incorporate community’s perspective, participation, and practices into research efforts.

Early examples of CBPR-focused programs date back to March of 2000. The Chemical Exposures and Molecular Biology Branch in the Division of Extramural Research and Training (DERT) at the National Institute of Environmental Health Sciences (NIEHS) brought together representatives from schools of public health, state and local departments of health, and public and private funding agencies along with researchers in CBPR. Fifty-five people participated. A variety of public and private agencies and institutions were represented, including the Environmental Protection Agency, the Department of Housing and Urban Development, the National Cancer Institute, W.K. Kellogg Foundation, Maryland Department of Health and Mental Hygiene, King County/Seattle Department of Health, University of Iowa School of Public Health, and the Texas A&M School of Rural Public Health. A 78 page report from the National Institute of Environmental Health Sciences—a part of the National Institutes of Health—states the purpose of the meeting was to further the use and support for Community-Based Participatory Research, in which the above institutions focused on six different themes relating to health and community building/participation.

The report concluded that community members’ contribution in developing and framing research questions, revising surveys, questionnaires, and publications, developing retention and recruitment strategies, hiring staff, and designing programs and projects greatly increases the cultural appropriateness of interventions and outcomes to providing health services. Having community members intimately involved in all phases of developing these mental health programs would lead to  improving data quality and quantity through trust. It would also improve research aims, enhance translation and sustainability of research findings, and improve community health, education and economics through the sharing of knowledge and dialogue. CBPR was not evaluated just for the Muslim community, but for any specific community where there is a need to develop effective health service programs.

Now that we have looked into the specifics of the CBPR model as well as the program’s goals and implementation, we can now address the measures that have led to the need for such research in the Muslim community. The primary issues are the stigmas and notions towards mental health and the lack of community involvement and mobilization.

The Muslim community too often ignores the topic of mental illness. Many Muslims go without counseling or support for their conditions due to the stigmas placed on the topic, which are formed by different cultural beliefs, attitudes, and stereotypes. In an interview with the Huffington Post, Kameelah Rashad, the Muslim chaplain at the University of Pennsylvania, suggests that

the idea or the belief that if someone is suffering with a mental health challenge, that is somehow a reflection of lack of faith or punishment from God for a previous sin, or the belief that this challenge requires just patience and perseverance and prayer, and that should alleviate what the person is going through.

Rashad goes on to argue that this falls into a form of “religious shaming”. These stigmas and ‘shamings’ squelch conversation about mental health and challenge the mobilization of the Muslim community.

Eman Hassaballa Aly MSW, a Digital Strategist at UIC’s Institute for Health Research and Policy, suggests that the topic of mental health is often treated as taboo and that in some cases traditional solutions to depression and other forms of mental illnesses—for example to pray more and supplicate to God—fail to address the chemical imbalances that some suffering from depression face.

Medication paired with talk therapy is an effective way to deal with depression. I don’t think the Muslim community is any different than other community of faith, all communities struggle with dealing with people who suffer from poor mental health. And the more we educate folks, the better off we’ll be.

In Hassaballa Aly’s opinion, there is a lack of programs, material support, community collaboration, and dialogue. Therefore, the first step to creating a dialogue among any community is education, which is why CBPR has the potential to be so revolutionary. By providing safe spaces to speak about the issues and ideas of mental health, CBPR fosters an educating environment and potentially paves the way for community bonding and collaboration. As Aly observes “This would be a good opportunity for mosques to partner with hospitals and clinics to bring services to the community.”

Community-based participatory research avoids single sourced solutions to mental health by creating a dialogue about the issue through community education. As Aly notes, mental illness is not a death sentence, people can live productive lives on medication. But people have to know about the illnesses and how they operate. There are also few places where the Muslim community can go for mental health programs targeted for their needs. In the Chicagoland area, there are individual psychotherapists and practices who have Muslim clients and the Khalil Center in Glen Ellyn offers “faith-based approaches rooted in Islamic theological concepts while integrating the science of psychology towards addressing psychological, spiritual and communal health.” Beyond those resources, there are few places that that Muslims can go for treatment that includes psychological, community, and faith-based perspectives on their condition.

Even beyond the community level, apart from a few programs and organizations like the National Alliance on Mental Illness, there is a lack of interest and support for those who suffer from mental illness. In Chicago alone, Governor Rauner’s proposed budget would cut $82 million from mental health programs, a move many health experts claim will be ‘devastating’.

At its earliest stages, CBPR does have limitations and challenges such as combining research and intervention and getting the community members involved in the extensive evaluation components of CBPR. Despite these limitations, NIEHS’s report shows how CBPR provides an opportunity for the research institution to provide outreach and community service to communities and workers. Because of its multifaceted nature, the CBPR project can form a springboard for obtaining additional funding from agencies that have not been as proactive for community-based projects, especially those relating to mental health.

The conclusions from Killawi and Padela’s “Using CBPR for Health Research in American Muslim Mosque Communities: Lessons Learned” is one of hope. Both researchers believe the CBPR initiatives within mosque communities have untapped potential for improving dialogue and education on matters relating to community health, especially mental health. In his book The Tipping Point: How Little Things Can Make a Big Difference, Malcolm Gladwell states,

If you want to bring a fundamental change in people’s belief and behavior…you need to create a community around them, where those new beliefs can be practiced and expressed and nurtured.

Mental health services have increasingly been more effective over the past three decades, often playing a significant role in shaping communities. Community Based Participatory Research can be used as a unifying tool, a mechanism to nurture and express the trials and tribulations of topics such as mental illness. Successful partnerships with different communities such as American Muslims and other avenues of support (i.e. interfaith, social networks, and cultural insiders) can revolutionize research models and outlooks, as well as adapt culture from within. Eman Hassaballa Aly is right, “mental illness is not a death sentence”, but perhaps is just another brick laid on the road of progress.