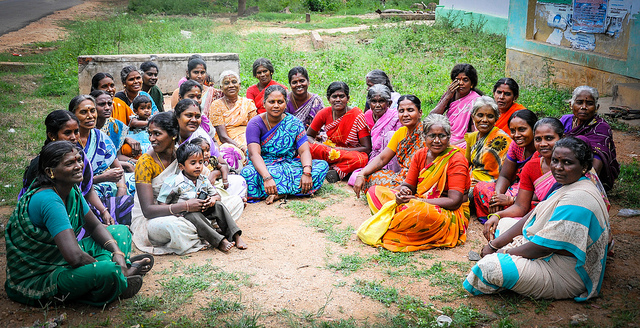 In remote crannies of developing countries, poor Muslim women are pooling their talents and resources to build a new synergy of collective empowerment to transform their lives. These small clusters  or collectives of women are known as Self-Help Groups.

A Self-Help Group is a group of a few individuals—usually poor and often women—who pool their savings into a fund from which they can borrow as and when necessary. Such a group is linked with a bank—a rural, cooperative, or commercial bank—where they maintain a group account. For a period of time in the beginning, the women only save money. They deposit a small sum, ranging from  20 rupees to 50 rupees (67 rupees equal one U.S. dollar) each month. After six months, the women are eligible to take small loans. These loans can either come from the group savings account or through the bank. The group helps determine if the loan is appropriate for each member and serves as a screening point for the bank. Because the liability of the loan is shared among the group, it is in each member’s interest to ensure that all other members are capable of paying back a loan on time.

Loans are then given out to individual members from these funds upon application and unanimous resolution drawn at a group meeting. The bank permits withdrawal from the group account on the basis of such resolutions. Such loans, fully funded out of the savings generated by the group members themselves, are called ‘interloans’, and have a short repayment period, usually three to six months.

After recording regular loan issuance and repayment for a minimum period of six months, the bank begins to lend to the group as a unit, without collateral, relying on self-monitoring and peer pressure within the group for repayment of these loans. The maximum loan amount is a multiple (usually 4:1) of the total funds in the group account.  Once the group matures, and graduates to a business enterprise, the financing is more need-based and is directly linked with the capital needs of the business.

When I initiated this programme as a bank manager, I encountered stiff resistance from the local clergy who couldn’t believe that their women could attend a meeting without a male chaperone. There were some who felt that since I was a male, I had no religions sanction to interact with women. Both religious and cultural barriers have stymied the uplift of Muslim women. But persuasion pays off. I convinced the village elders that if their women remained ignorant, their children would also have the same fate. After initial reluctance, the elders conceded some ground.

Shahnaz Parveen was a fifty-two-year-old illiterate woman, who was a member of one of the oldest groups in the Dahegaon village in the suicide-ravaged district of Yavatmal in central India.  Since her group did not have a credit line with the bank and had a low cash base, her loan requirements could not be entertained at the group level. Because of drought, she had few remaining means of survival. Married at 18, she had three children, all daughters, and she was the sole breadwinner. She had an alcoholic husband whose habit she funded out of her wages and who beat her if she answered back. Godavari’s life consisted of cooking meals, taking care of her children and staying quiet. Always required to ask her husband’s permission to leave the house, and these requests usually denied, she described herself back then, in a breathy, weak-lunged voice, as “sad and alone”, with a body work-hunched and wiry. Her neighbors confided that she was a tear factory even on good days. While struggling to survive on her family’s meager income, she did not think she had the authority to tell her husband to stop spending thirty percent of their earnings on liquor. Fear of poverty and respect for society kept her locked in a bad marriage, as did the prospect of losing custody of their children. The glassy stare in her eyes revealed some of the despair.

One day, Shahnaz’s neighbor, Shakila, told her about the program that helped women pool their own savings—sometimes as little as 20 rupees a month—and then provide loans to each other. Defying her husband and leaving the house without permission, Godavari and some women in her community went to learn more about the program, and decided to start their own village savings and loan group. Godavari was excited about what the bank and its manager might mean for them, but her husband tried to dispel what he considered her silly notions that any bank would actually help them.“I don’t want to have anything to do with the bank,” he said at first, with a dismissive toss of his hands to his wife who he felt was being taken for a ride by a charlatan banker.

When I first proffered the loan, Shahnaz stuttered with fright and her honest face crumpled in despair. Clenching and unclenching her fists, she drank a full glass of water from a battered aluminum jug. I assured her that if she made a serious attempt at properly investing the loan and yet failed in generating surplus, we would not divest her of her bare belongings in the way of a moneylender. Shahnaz scratched her head, did quick mental math and decided to give the loan a try. There was nothing to lose. When I placed the envelope in her astonished hands, her eyes grew large, and they darted at the checkbook lying on the table and then back at me. She signed the receipt in a hurried, untidy scrawl.

She screamed in delight as she saw what was inside the envelope. She trembled. Tears rolled down her cheeks. With help from us and with the combined resources of her new business partners, Godavari bought a cow for around 4,000 rupees which continues to produce daily dividends—more than three pints of milk that she sells to the upper-caste landowners in the neighboring village. Recently, the cow gave birth to a calf. Godavari was already engaged in dairying as a wage labor and her dream of having her own independent unit was realized.

The experience reinforced our belief: you can’t just give a woman a loan and then send her on her way—you have to accompany her as she struggles to make her way out of poverty. Shahnaz’s business took off quickly, and she began earning enough income to provide for her family, send her daughters to school, and pay for her husband’s medical bills. She gained some of the respect she deserved from her husband, who allowed her more freedom and even began to help her with her business ventures.

Shahnaz is now seen by her community as a ‘husband-tamer’ and a smart businesswoman. Since joining the program, Shahnaz has not only become an inspiration for other women in her community, but she serves as a prime example of how economic security can provide the right kind of aid for women and their children and even have a positive effect on marriages.

Though illiterate, her skills at financial arithmetic are phenomenal. She and the thirty other women of the village Self-Help Group even managed to chase the local liquor shop out of their village. They walk about proudly in their uniforms—identical saris that they bought out of the money they pooled from their precious savings. Contrast them with their appearance just a few years ago—a group in discolored rags. She remembers standing for hours at the local water pump—which she could not touch—waiting for a higher caste woman to take pity on her and fill her bucket. She was so poor; she washed her hair with mud and owned a single sari. When she laundered it, she had to stay in the river until it dried. She herself says, “When I started, I had no support from anyone, no education, no money. I was like a stone with no soul. When I joined the Self-Help Group, it gave me shape, life. I learned courage and boldness. I became a human being.” Now an infectious smile seemed to have dug a permanent home in her face. Other women in this village got tiny loans to invest in miniature businesses.

The enthusiasm of women is now rippling into all possible spaces-political, economic, social and cultural. Now that the women are financially empowered and have become breadwinners  the local perceptions about women has changed. Even the clergy feel that freedom for their womenfolk has brought a modicum of prosperity for their families.

Today, voices are raised without fear, and are heard outside the walls of homes that once kept a woman protected, but also isolated.  Some of the women who speak here have stepped out.  Others who have not are beginning to be aware, eager to find expression.  The Self-Help Group has given them a voice, an identity.  The encrusted mind has now grown into a parachute breaking the outer trappings and finding its new influence.  Her silence has now found expression.  One can see their minds and wit sparkle with a courage reclaimed and resurrected by the Self-Help Group and adrenaline streaking through their veins, she is as confident as she was in her mother’s home.

One positive feature of the group meetings is that there is always an item on religious learning in the group’s agenda. Like the traditional Muslim halaqahs (groups) for sharing religious knowledge, these groups are also creating awareness on how the Qur’an addresses women-related issues.

But for microfinance to succeed as a tool for empowering women, men have to be properly sensitized so that women are allowed both time and freedom and opportunity to chart out a path of social and economic independence. Treating women with the inherent dignity that they were created with, ensuring that their rights are preserved and advocating that they be given equitable opportunities to succeed is necessary to uphold the Qur’anic vision, “O you who have attained to faith! Be ever steadfast in upholding justice,” (4:135). The way forward requires leveling the playing field, by changing hearts and minds, if possible, or by instituting affirmative action, when antiquated cultural norms prove too intransigent.

It is clear that Muslim women’s empowerment, like many things, cannot be imposed on a country or a culture from the outside. Men and women within these conservative communities must first find their own reasons and their own justifications to allow women a fuller role in society. Increasingly, they are finding those reasons within Islam.  Like men, women deserve to be free. It is only a matter of time until the day comes when they [women] test their chains and break free. Empowering women should be as much a man’s responsibility, as it is a woman’s aspiration. Interestingly, some of the most influential Islamic feminist thinkers are men.