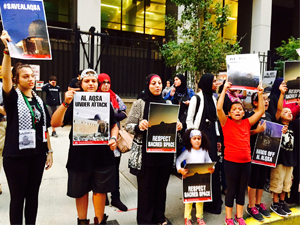 Along with similar protests in New York, Jerusalem, Hebron, Ramalah, and Gaza City, 300 Chicagoans protested the escalating Israeli security forces and extremist settler attacks on Muslim worshippers at the Al-Aqsa Mosque in Jerusalem. Israeli security forces closed the mosque’s compound to worshippers before the start of the Jewish New Year, Rosh Hashanah. This is one of the times when extremist Jewish groups in Israel press for exclusive access to the Al-Aqsa Mosque, considered the third holiest place in Islam. As has occurred before, these extremist groups are protected by the Israeli government and allowed access to the mosque protected by Israeli security.

Last week there were three straight days of Israeli police storming the courtyard of the Al-Aqsa Mosque so extremist settler groups can “tour” the area. On Tuesday, Suleiman Ahmad, the president of Jerusalem’s Affairs Department, told Al Jazeera that at least 36 Palestinians were injured in the clashes. “They have placed snipers on the rooftops and are using rubber bullets,” Ahmad said.

Yousef Mukhaimar, the head of the Al-Aqsa worshipper movement, Mourabitoun, also told Al Jazeera that Muslim Palestinians were “prohibited from entering the mosque to pray, while Israeli settlers are allowed to enter the mosque and roam around freely under police protection…Wide areas of the mosque carpeting have been burned as a result of the Israeli police firing bombs, bullets and tear gas canisters inside the mosque compound.”

The Al-Aqsa Mosque is located in the Temple Mount Haram al-Sharif site, which Jews revere as the site of their biblical temple. The Temple Mount Movement, a loose coalition of several messianic, extremist Jewish groups want to gain control of the Al Aqsa Mosque. In the 1980’s, members of this movement were arrested in a plot to blow up the Dome of the Rock and rebuild the Jewish Temple that they believe was originally on its spot. They continue to want to “rebuild the Temple” as this quote from their website demonstrates:

The Temple Mount and Land of Israel Faithful Movement will continue with our godly campaign and holy work. We shall proceed intensively to serve the G‑d of Israel with all of our hearts and devotion to build His Holy Temple on the Holy Temple Mount in Jerusalem and to bring to pass all of His end-time prophetic plans for Israel and the entire world.

The Al-Aqsa Mosque, a World Heritage site protected by UNESCO, has been under Muslim control since the 7th century. This follows the same protection afforded to Christian sites in Jerusalem. Recognized by the international community as the occupier of Jerusalem, Israel is obligated by The Hague Regulations and UNESCO to protect Palestinian religious and cultural heritage sites.

With the current more right-wing Israeli government, these conflicts have been escalating and becoming more violent. This increase in danger to the Al Aqsa Mosque led to the outpouring of protests in Chicago, New York, the West Bank and Gaza this last week. The Chicago protest was held in front of the Israeli Consulate.

Representing one of the organizations who sponsored the protest in Chicago, the American Muslims for Palestine (AMP),  Nida Sahouri said that

They are trying to get us out of Al-Aqsa. They want to empty Jerusalem to turn it into an illegal settlement. These groups want to demolish Al-Aqsa and build a temple on the grounds…they are funded by the Israeli government and protected by the IDF [Israeli Defense Force].

Dr. Mohammed Kaiseruddin, Chairman of the Council of Islamic Organizations of Greater Chicago (CIOGC) emphasized the religious freedom issues of these events in Jerusalem.

An attack on any church, any synagogue, any mosque is unacceptable. The attack on Al-Aqsa Mosque is unacceptable. This is not a Muslim issue, not a Palestinian issue, it’s a human rights issue. This is happening because of 50 years of occupation and settlers getting more and more violent. We need to bring it to the attention of the peace loving people of the world and of the U.S.

Newland Smith from the Anti-War Committee of Chicago provided the following statement about the group’s reasons for supporting the protest.

I stood in solidarity with Chicago-area Muslims in front of the Israeli Consulate late this afternoon to call on the State of Israel to end its prohibition of Palestinians from worshiping in peace at the Al-Aqsa Mosque sanctuary. Ariel Sharon by his provocative actions on the Temple Mount in 2000 sparked the Second Intifada. Israel must stop the provocations of the Temple Movement.

Dr. Zaher Sahloul from the Syrian American Medical Society spoke about the connections between extremists in Syria and in Israel.

Syria and Palestine are one on this issue. The Israeli settlers and ISIS are the same – both are extremists who try to instill hatred among religions. ISIS is not supported by any government, but the settlers are supported by the Israeli government.

As is typical for these types of events, there was no local news coverage of the protest just as there is little to no reporting of this escalation in violence at the Al-Aqsa Mosque in the national news. Even when these attacks on worshippers at the Al-Aqsa Mosque by Jewish extremists supported by the Israeli government are clearly violations against international law insuring free expression of religion within Jerusalem, they are ignored by the U.S. press.