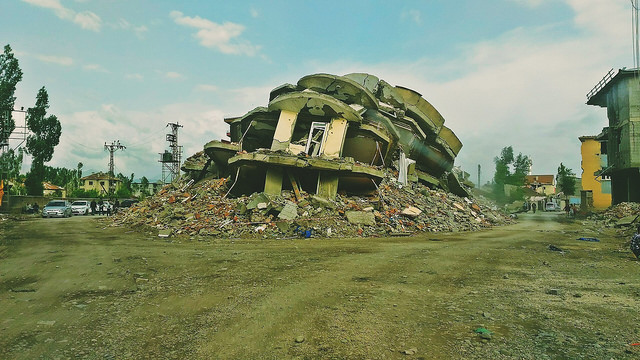 Historically a rather unimportant outpost at the northern terminus of the Mesopotamian plain, the Turkish town of Cizre has drawn the gaze of the international community in recent months as the epicenter of the new conflict between the Turkish government in Ankara and the Kurdish rebels, namely the infamous Kurdistan Workers’ Party (PKK).

Following riots and demonstrations in the town throughout 2014 and 2015, Cizre was besieged by the Turkish military for eight days this month with an imposed curfew during which dozens of civilians have been killed. Despite a ceasefire in 2013 between the PKK and the Turkish government, tensions have escalated over the course of the past year, and the Turkish air force has begun airstrikes on PKK positions and cracking down on civilian demonstrations in the country’s southeast. Armed resistance and independence movements in Kurdish territories in Turkey are nothing new in the country’s recent history. However, Cizre’s position on the Tigris River near the Turkey-Syria-Iraq tripoint is emblematic of the new character of the ongoing Kurdish fight for autonomy in which Kurdish self-determination efforts in each of the three countries have become intertwined. The success and vitality of these interconnected struggles represents a high watermark for Kurdish nationalism, signifying the beginning of a Kurdish Spring.

On August 25th Turkey signed an agreement with the United States to jointly combat the Islamic State, allowing the U.S. to utilize Turkey’s Incirlik Air Base to strike at ISIS targets in Syria and Iraq. However, since the agreement was signed, Turkey has focused primarily on engaging the PKK with airstrikes and troops on the ground. Since the 2013 ceasefire, the PKK  moved its headquarters out of Turkey into northern Iraq. Turkey’s airstrikes have thus unnerved the United States, which is working with another Kurdish group, the Peshmerga, to fight ISIS in the region. It just so happens that the PKK is bolstering Peshmerga positions along the frontlines, making the PKK a de facto American ally in the fight against the Islamic State – despite the fact that it is designated a terrorist organization by the United States. Similarly, in Syria, the Kurdish YPG militia has been very successful at capturing territory from ISIS and protecting strongholds like Kobani with the help of U.S. airstrikes. The Kurdish YPG militia was founded in 2011 at the beginning of the civil war as the military wing of the PKK’s allies in Syria.

So where does Cizre fit into all of this? Since 2014 when tensions between the PKK and the Turkish government began to sour anew, Cizre has emerged as a bastion of PKK support in southern Turkey, becoming a flashpoint in the new conflict. Riots and demonstrations were initially sparked there not by events in Turkey as in the past, but rather by the suffering of fellow Kurds in Kobani, Syria, who were being besieged and massacred by ISIS while the Turkish army stood idly by just miles away across the border. This is partly because 17 Kurds from Cizre have died fighting in Kobani, and they are not alone. Many Turkish Kurds have crossed the border into Syria to fight with the YPG, creating cross-border solidarity between Kurds in the two countries for the first time in recent memory. As the border between Syria and Iraq has become obliterated by ISIS’s advance, Kurds have begun cooperating across this boundary as well. The YPG regularly cooperates with Kurdish groups in operations near the former Iraq-Syria border, including even the PKK who took the lead on liberating and evacuating Yazidi villages in the Sinjar mountain region at the end of 2014.

This level of cross-boundary collaboration between Kurdish groups in Turkey, Iraq, and Syria is unprecedented, and many challenges remain. Because of the novelty of this cooperative effort, many rivalries have sprung up amongst the Kurds, primarily between the two strongest players, the PKK and the Kurdish Regional Government in Iraq. While the PKK has provided the Peshmerga with invaluable assistance on the frontlines, Iraqi Kurds, led by President Massoud Barzani, want to consolidate control over the Iraqi Kurdistan autonomous region without sharing power with either the PKK or Yazidi Kurds living in the Sinjar Mountains who are pushing for self-rule. In addition, although the YPG and Peshmerga are fighting with the help of the United States, the relationship is complicated by the fact that the U.S. remains a staunch ally of Turkey, the sworn enemy of the Kurdish cause.

Prospects for the future of the Kurds remain optimistic, even though the cooperative efforts underway now between the various groups in the three countries represent more of a marriage of convenience than a real long-term alliance. The PKK, which has historically focused on fighting the Turkish military, has taken up arms alongside the Peshmerga in Iraq and has supported Kurdish groups like the YPG in Syria. These PKK actions displays a desire to participate in the collective defense of the Kurdish people.  The Kurds brutalization at the hands of ISIS presents a threat greater than any facing them in Turkey.  On top of that, this moment is the best chance the Kurds have ever had to push for independence, evidenced by the announcement of a referendum on independence in Iraqi Kurdistan last July. As of September 2015, the YPG in Syria have conquered a wide strip of land in Syria’s northeast stretching from Cizre to Kobani, and with American assistance, their gains will likely only continue to grow. These advances open the possibility of an independent Syrian Kurdish state as well. In Turkey, independence remains a far-fetched premise for Ankara.  However the last few years have seen a rollback of several oppressive policies against the Kurdish population, and President Erdogan’s rhetoric has at times been sympathetic to them. Perhaps the Kurds can use this momentum to elicit historic concessions from the central government without the use of violence or terrorism.

As with everything that goes on in the central Middle East these days, the fog of war continues to obscure developments on the ground. It is unclear how wartime strategy will translate into real political consequences in a hypothetical post-conflict era. Once bonds are made they are difficult to break, so there are bound to be consequences to this newfound cooperation between the Kurdish people and their representatives. Having been snubbed in negotiations following both of the world wars, this Kurdish renaissance represents the best chance Kurds have had in decades to achieve their goals.  Kurds for the first time are fighting together to protect their land, their people, and their cultural rights. Although it may be too early to tell, the prospect of an independent, united Kurdistan in the near future looks more real than ever before.