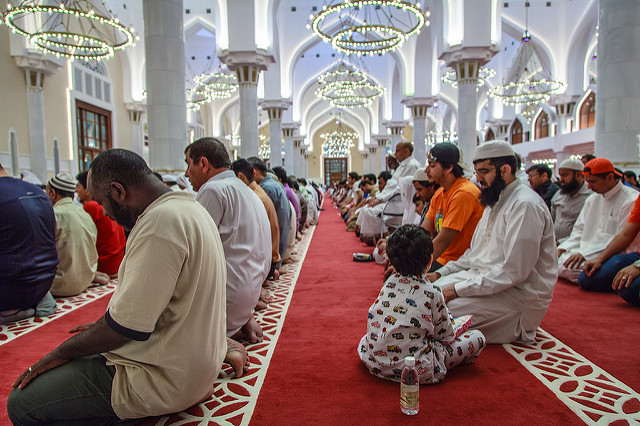 Facebook
Twitter
Pinterest
WhatsApp
Email
Print
Muslims are again in the thick of a furious debate in India. The controversy over the divorce procedures among Muslims was still in embers when the worn out theory of a Muslim population bomb was reignited once again. The latest census data in India has shown some interesting facts. The anti-Muslim lobby has cherry picked those findings that suit them to bolster their claims that Muslims pose a population threat.

A common myth being perpetuated by the anti-Muslim brigade is that in the long run Muslims will outnumber Hindus. There have been multiple online postings that express concern that the Indian Muslim population will expand to 925 million and the number of Hindus will decrease to 902 million by 2035. Hindu festivals will no longer be celebrated by 2040. The more hysterical postings claim large-scale conversions to Islam will occur and that there will be widespread killing of non-Muslims. The most “apocalyptic” prediction of all is that by 2050, the Muslim population will be 18.90 million and India will become a Muslim country. But Muslims are not the only targeted religious group.

Admittedly, Muslims have shown a propensity to have larger families– but not because there is an Islamic conspiracy to “take over’’ India. Studies show that this has to do with socio-economic factors, especially educational backwardness. Historically, Muslims had had a lower population growth rate when they were economically more prosperous and it rose as their socio-economic condition deteriorated.

Poverty has a direct bearing on family demographics. Those living in extreme poverty feel their children are more vulnerable to sickness for which they can’t afford expenses. In order to offset the fear of losing children to mortal diseases,they hedge this risk by producing larger number of children. There is a direct relationship between poverty and fertility and inverse relationship between fertility and higher per capita income. The new economic programs are slowly delivering results and improvement in living conditions is bound to transform the mindset of this segment of the population.

Rural women, particularly among Muslim families, live in the stranglehold of harsh customs. They are mostly unempowered and are often unable to act on their own behalf to obtain family planning services to regulate their childbearing. They are also the group most likely to believe that bearing many children will provide a bulwark against poverty in their old age. The financially better off have easy access to so many financial security programs for planning for a peaceful and hassle-free old age. The poor carry a wrong perception that having more children would provide additional source of earnings and thus they would have a better kitty to cope with life’s eventualities.

Fortunately there is a growing awareness among the new generation for women. Muslim women are also challenging patriarchy that all women experience around unequal power hierarchies in society. Muslim women’s activism around education and equal opportunities are often underpinned by their emancipatory readings of foundational Islamic texts. The new wave of awareness of the priority of education has catapulted Muslim women from the hearth to positions in various fields. The ripple benefits of this new development are bound to impact their thinking and will definitely impact the demographic profiles.

The current decline also is directly related to the fact that the younger generation of Muslims is more educated and aspirational. Especially, educated and aspirational Muslim women are as careful about family planning as their Hindu counterparts. I know countless young Muslim couples in their 30s who have no children despite family pressures because they don’t want a child unless they can give them their best.

The Muslim population growth is still out of sync the national trend but, if the latest findings hold up, it should get there soon.  The truism is that there is not much to despair on the population front or to conjure fantasies of Muslims hegemony. What is required is not a political lens. It is the economic prism through which we should view the whole issue and focus on programs that can further refine the demographic equation and correct the skewed profile. 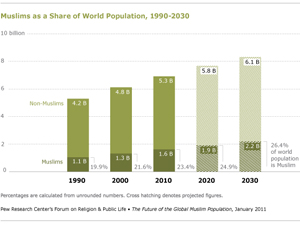 We have been discussing trends in the Indian population, but  global trends also show that the growth of the Muslim population has slowed down and in the foreseeable future will match the average demographic equation. A recent study from the Pew Research Center on religion and public life demonstrates that neither the UK nor Europe are in danger of a Muslim takeover, whatever the American Right may believe. “The Future of the Global Muslim Population: Projections for 2010-2030” is a major and comprehensive study that focuses on the Muslim populations in North America, Europe, Africa and the Asia-Pacific and provides a revealing look into the future of the Muslim population worldwide and the future religious makeup of the world.

It is strange that these Pew findings and projections are less likely to circulate as widely or quickly as statistics about predictions of a Muslim takeover. Commentators seem more focused on ringing false alarm bells than on presenting facts. The reality is that there is no takeover, but that there is a danger of intolerance that threatens the very fabric of society. We are not witnessing a clash of civilizations, but a clash of cultures fostered by those who portray Islam as a monolith. These people see religious and cultural diversity solely as a threat rather than as a potential source of strength and enrichment. The liberal democratic heritage and fabric of our societies must be safeguarded and fear mongering, religious and racial discrimination rejected and marginalized in a future based on facts not fiction.

How Relevant are Madrasas (Islamic Schools) in the Modern Age?