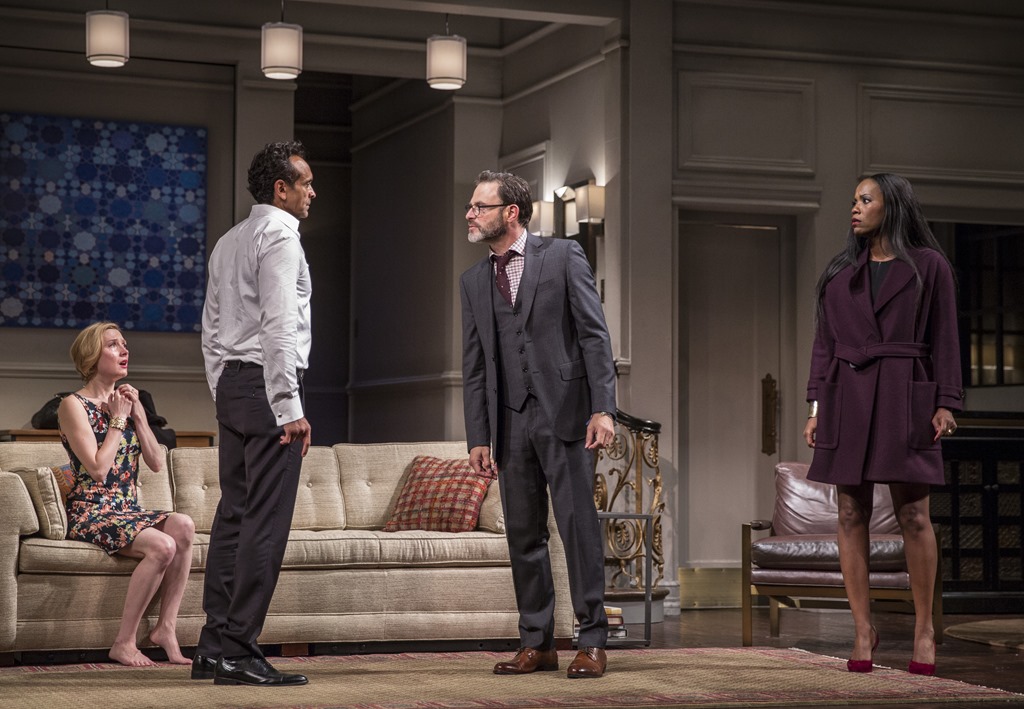 I wanted to enjoy Disgraced when I went to see it at the Goodman Theatre. I really did.

When I first read the synopsis, I thought, great — a show that deals with race and religion in the context of both personal and professional relationships; a show that’s not afraid to take on the subjects so many people are afraid to even broach, the conversations that many people, in all honesty, are just too afraid to have.
And it did. In the 80 minutes I sat in that balcony seat, I watched as racial slurs were hurled across the stage, the interpretation of religious texts were brought into question and the validity of the Constitution of the United States in the modern world was, too. If a line was drawn, they crossed it on more than one occasion.

So yes, my expectations were met, but maybe not in the way I had hoped.

For those who haven’t seen the show, Disgraced tells the story of Amir Kapoor, a man of Pakistani descent who has turned his back on his religious and cultural upbringing (going so far as to change his last name and parent’s place of birth), and his wife Emily, a white, non-religious artist with a keen interest in Islamic art and history, hosting a dinner party in their Upper East Side Manhattan apartment. Their guests are Jorey, a black co-worker of Amir’s, and Isaac, a Jewish curator of art who has expressed interest in Emily’s artwork for his upcoming show. As the drinks are poured and inhibitions are lowered, what begins as “shop talk” and good-natured, if not awkward, humor escalates into hard conversations that deal with race, religion, ethnicity and the complexity of identity. In other words, everything we’re taught to not bring up at the dinner table finds its way into the conversation that night. It all comes to a climax that elicits a sharp gasp from nearly every audience member in the house.

As the conversation escalates, Amir’s voice against Islam and the values it instills becomes louder and more pronounced. On countless occasions, his wife and dinner guests fight back in defense of the religion. But he counters with something that no one in the room can really argue: “Have you even read the Quran?”

His question brought near silence. They can’t argue that when it comes to the Quran, they really don’t know what they’re talking about.

The Quran, he says, is like one long hate letter to humanity.

So, for whatever their arguments in defense of Islam are worth, Amir makes light of them with the simple fact that he is the closest thing to a voice of authority when it comes to matters of his former religion.

By the end of the show, the audience is left with the image of a former-Muslim man; with an emotional and physical rage that the audience is now lead to believe is a result of his religious and cultural upbringing. He’s not a man struggling through a crisis of identity in a society that systematically punishes him on the basis of his skin color; instead, he’s painted as a man who is the way he is because of his skin color and because of the culture he first identified with. The same religiously driven rage is seen in Amir’s nephew Abe at the end of the show when the two get into a fight.

All of this isn’t to say that the show itself was a complete flop; it had its share of positive qualities. Production-wise, I was impressed. Each actor contributed a unique perspective to the show, and for the most part, I bought into the role that they each played.  I bought into how uncomfortable the atmosphere must have been in that room, several drinks in and many hurtful comments later. The set, too, was incredible. It realistically depicted what I imagine an Upper East Side Manhattan apartment to look like, and when the double doors to the balcony opened to the sounds of the city outside, the set felt all the more real.

Not only that, but there is a fair argument to say that the issues these characters address are the kinds of issues we do need to talk about more in mainstream media. Race, religion, politics; they’re all topics that we’re trained to keep out of formal conversation, especially in the context of friend or business relationships. As the writer, Ayad Akhtar, no doubt hoped and expected, his show is one that generates discussion. It’s a powerful display of the intricacies of interracial and interfaith relationships. It gives a voice and representation to those who rarely get one in mainstream media. It asks the questions we are generally too afraid to ask.

My only concern is that maybe, just maybe, it could have been handled with more care.